A solidly bearish weather outlook sent natural gas forward prices tumbling from April 11-16 as the mild spring setup was expected to significantly improve storage inventories in the weeks ahead, potentially leading to a year/year surplus in stocks. May forward prices dropped an average 11 cents, while June and the balance of summer (May-October) slid a dime on average, according to NGI’s Forward Look. 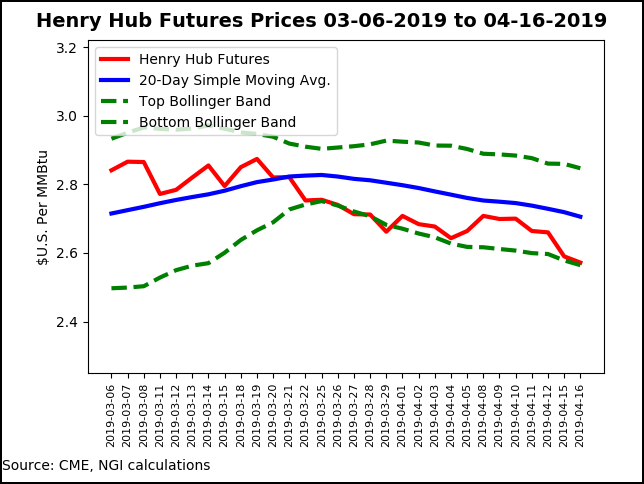 After some slight additions to demand in last Tuesday’s weather data, models shaved off a few gas-weighted degree days (GWDD) from the forecast for the balance of April, according to Bespoke Weather Services. That was a common theme for a solid week, with demand levels expected to be near historic lows for this time of year through the end of April, thanks to a pattern dominated by a lack of blocking, as well as a good deal of warmer Pacific flow entering North America.

“April as a whole looks on target to rank in the top five warmest Aprils in the historical dataset, now actually into the top three, with over 150 fewer GWDDs than we saw in the very cold April of last year,” Bespoke chief meteorologist Brian Lovern said.

It was still early to see much in the way of meaningful cooling degree days, but if the pattern continues into the first half of May, the market will be at risk to see some cooling demand at least across parts of the South, which “could be interesting” as far as getting an early assessment of how burns will perform with any heat, according to Bespoke.

For now, however, the mild conditions are expected to vastly improve storage inventories that continue to trail historical levels, with several injections expected to top 100 Bcf in the weeks ahead and a few that could easily reach near or above 130 Bcf.

Last Thursday, the Energy Information Administration (EIA) reported a 92 Bcf injection into storage inventories for the week ending April 12, a build that was on the higher end of market expectations and a few Bcf above consensus.

The reported injection compared with last year’s 34 Bcf withdrawal and the five-year average injection of 21 Bcf.

Inventories as of April 12 stood at 1,247 Bcf, which is 57 Bcf below year-ago levels and 414 Bcf below the five-year average, according to EIA.

Meanwhile, production levels were a little lower last Wednesday, and Canadian imports were slightly down as well. However, exports to Mexico were also off by around 0.5 Bcf, according to Bespoke.

The small adjustments in that data appeared to have no bearing on futures, as the Nymex May contract on April 17 settled 5.5 cents lower at $2.517 and June lost 5.8 cents to reach $2.559.

From a technical perspective, the continuation chart prompt-month contract has been hugging the bottom of its 20-Day Bollinger Band since March 22, and Wednesday’s decline pushed prices below major support from its previous reaction low of about $2.55 that was reached in early February, according to NGI’s Patrick Rau, director of strategy and research. However, the gradual slide in the futures market has left the May contract extremely oversold.

The May contract had a slow stochastics reading of 12.1 early Wednesday. In the last four times the continuation contract approached that level, the prompt month rebounded by more than 20 cents, Rau said. “I’m not suggesting that happens again this time, considering the country remains awash in production and is entering the shoulder season, but the May contract does appear to be setting up for a little technical rally-driven relief.”

The $2.55 previous support level has been tested numerous times since August 2016, but until Wednesday, had always held. From a pure technical standpoint, given May’s slide just below $2.52, “then there is nothing to stop the continuation chart from falling toward $2.00,” Rau said.

“But I would have to think producers would start to rein in unhedged production activity if that were to happen, particularly publicly traded ones, as they have vowed to take down activity in such a situation in order to keep their spending within free cash flow.”

Forward prices have settled into shoulder-season mode, with steep double-digit sell-offs seen across the country as “near-perfect” daytime temperatures in the 60s to lower 80s were expected to blanket key demand regions for the next few weeks, according to NatGasWeather. While weather systems were expected to continue bringing widespread heavy showers to some areas through the rest of the month, those storms were expected to produce only local cooling.

It was forecast to be a touch warmer over the southern United States at times as daytime highs in the 80s to lower 90s gained ground, especially across the Southeast, but the far more comfortable conditions in the northern part of the country offset those pockets of heat, the forecaster said.

With little in the way of demand and strong production that is being held back only temporarily by a slew of maintenance events across the country, the path was clear for natural gas forward prices. Despite the sell-offs, the majority of May contracts continued to price well above $2. That wasn’t the case in the Permian Basin, where prompt-month prices sank further into negative territory during the April 11-16 period even as cash prices have risen and stayed above zero for the last five days.

NGI has covered the Permian’s recent price pains for weeks, but robust production growth and lack of takeaway capacity has plagued the region since 2017, when the Waha discount to benchmark Henry Hub first blew out to around a quarter, from 10-15 cents in 2016. And with the first of two key pipeline projects not expected to enter service until October, the new reality for Permian pricing will likely linger for a few more months, according to RBN Energy LLC.

While the distressed pricing may affect producers in the play, power generators stand to reap the benefits as the largest source of local demand for Permian gas is power plants. “The question is, can power plants alone soak up enough incremental gas to keep prices from getting worse in the Permian?” asked RBN analyst Jason Ferguson.

The Permian is home to eight gas-fired generation plants, four of which are high-efficiency combined-cycle plants and four that are less efficient. Altogether, total Permian power burn would total just above 900 MMcf/d if all eight plants operated at full capacity continuously. While that’s not likely the case, Permian gas burn has been reacting predictably to the lower prices, according to RBN.

“Looking at it from the pipeline flows perspective, Permian-area power plant deliveries off of Berkshire Hathaway’s Northern Natural Gas Pipeline, for one, reached a record two weeks ago.”

This suggests total power burn may have set a record at that time. Considering the low, potentially negative prices power producers likely paid for that gas, “it’s safe to assume that power plants in the Permian have had a very good run lately.”

That said, the market has only entered the shoulder season, and power plant demand is very likely to continue increasing as the summer cooling season begins. On the other hand, the upside to power burn is still capped by RBN’s theoretical maximum power plant capacity of 900 MMcf/d, “and even that maximum would be difficult to reach given plant maintenance events and other physical constraints.” Furthermore, West Texas, an oil-heavy drilling region, is also a hotbed for wind production, and when the wind is blowing, as it often does, the need for gas-fired generation is reduced, according to RBN.

“So, while we’re not saying a maximum summer peak burn near a rate of 900 MMcf/d is impossible if prices remain negative, the plants are just not likely to see that type of burn around the clock, especially with forward gas prices in the Permian still modestly positive for the summer season, at least for now,” Ferguson said.

Other notable movers across the country included SoCal Citygate, where May prices plunged 53 cents from April 11-16 to reach $2.72, June dropped 16 cents to $3.555 and the balance of summer slid 20 cents to $4.29, Forward Look data show.

NOVA/AECO C May was down just a penny to 93.5 cents, while June edged up 3 cents to $80.8 cents and the balance of summer slipped a penny to 91 cents.