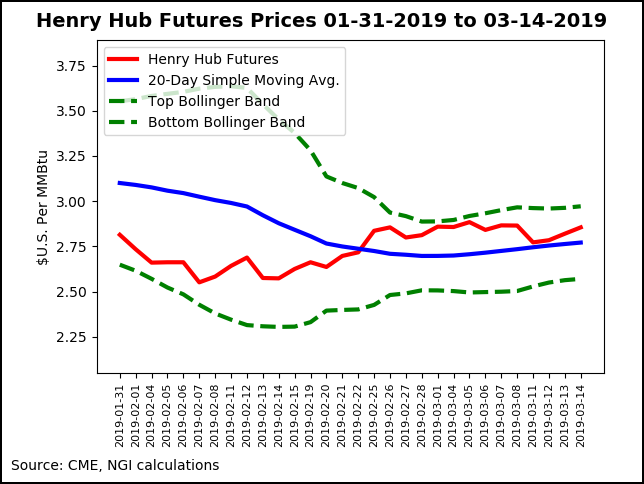 Some of the largest declines occurred in the typically volatile Northeast, where temperate conditions tamped down buying interest during the week. Algonquin Citygate dropped $3.455 to average $3.090, while Transco Zone 6 NY shed 97.5 cents to $2.700.

Despite blizzard conditions in the Rockies and Plains during the week, spot prices trended decidedly lower in those regions. Cheyenne Hub dropped 50.0 cents to $2.595, while Northern Natural Demarc fell 61.5 cents to $2.590.

West Texas prices had an up-then-down week in the day-ahead market. For most of the week, a drop in production out of the Permian Basin helped boost prices and shrink basis for points like Waha. But a maintenance-related constraint on pipeline flows out of the region heading into the weekend coincided with a sharp pullback on Friday. For the week, Waha finished close to even, shaving off 2.5 cents to average $1.535. El Paso Permian fell 14.0 cents to $1.565.

Meanwhile, with forecasts offering a clearer — and generally bearish — picture on the weather outlook through the end of the heating season, natural gas futures sold off Friday. Largely reversing gains from the previous two sessions, the April Nymex futures contract fell 6.0 cents to settle at $2.795, near the bottom of the day’s range from $2.856 down to $2.791. The front month finished the week 4.0 cents lower after opening Monday at $2.835.

NatGasWeather viewed the midday data Friday as little changed. Guidance still suggested that the “relatively chilly” pattern over the weekend and into the week ahead would likely result in the last storage withdrawal of the season as temperatures turn milder toward the last week of March. “The most recent data continues to suggest a relatively mild pattern will hold over much of the country through the end of the month and into the start of April,” NatGasWeather said. “As such, after next week, weather patterns will be viewed as neutral to bearish unless there were to be notably colder trends.”

As EBW Analytics Group CEO Andy Weissman put it Friday, the overall picture for the natural gas market is clear, with forecasts signaling an early start to the injection season.

“The storage deficit versus last year could be cut by nearly half in just two weeks, with the potential for this decline to continue throughout April,” Weissman said. “As this pattern starts to become clear, the odds are high that Nymex gas futures prices will head lower.”

Analysts on Friday continued to digest the week’s hefty storage withdrawal and what it suggests about market balance as the start of injections nears.

The Energy Information Administration (EIA) reported a 204 Bcf withdrawal from U.S. gas stocks for the week ended March 8 — a week that saw unseasonably frigid temperatures and elevated prices in the cash market.

But market observers had been looking for a hefty withdrawal. Major surveys had pointed to a withdrawal in the 208-210 Bcf range, and some estimates approached 220 Bcf. Intercontinental Exchange EIA financial weekly index futures had settled on a pull of 205 Bcf, while NGI’s model had predicted a 222 Bcf withdrawal.

“Finally, U.S. production (up just under 100 MMcf/d week/week) has yet to recover as maintenance/outages in the Permian and Denver-Julesburg basins have kept a lid on volumes.”

Genscape Inc. analysts similarly viewed the withdrawal figure as neutral, neither tight nor loose, versus the five-year average when compared to degree days and normal seasonality.

Analysts with Raymond James & Associates said after adjusting for weather-related demand, the 204 Bcf withdrawal implies the market was 3.0 Bcf/d looser versus the same week last year. The market has averaged 3.2 Bcf/d looser over the past four weeks, they said.

Spot prices rose throughout the Northeast and Appalachia Friday as temperate conditions along the East Coast were expected to turn colder over the weekend.

On Friday, NatGasWeather was calling for a cold front to push through the East overnight, “ending very mild conditions of the past couple days. This will bring a surge in national demand as lows drop into the teens to 30s over the eastern half of the country, including 30s and 40s across the southern U.S.”

The forecaster called for “additional reinforcing cold shots” to follow during the week ahead, potentially delivering the last remnants of winter. By the end of the upcoming work week “high pressure is expected to rapidly strengthen across the northern U.S. with above normal temperatures as highs reach the 50s to near 70 degrees. Warming will be slightly slower arriving across the South and East, but when it does, very comfortable conditions will result as highs reach the 70s and 80s.”

In the Northeast, Algonquin Citygate jumped 46.0 cents to average $3.240 as Radiant Solutions was looking for temperatures in Boston to drop from around 12.5 degrees above normal Friday — including highs in the low 60s — to a few degrees cooler than normal by Sunday and Monday.

Double-digit declines were the theme throughout the Rockies and California heading into the weekend. SoCal Citygate tumbled 43.0 cents to $3.670, while SoCal Border Avg. shed 56.5 cents to $3.080. In the Rockies, Cheyenne Hub dropped 25.5 cents to sit at $2.550.

The recently volatile Northwest Sumas gave back 46.0 cents to average $3.055 Friday as volumes flowing toward the Pacific Northwest through Westcoast Energy Inc.’s Station 4B South appeared adequate to meet weekend demand. The Enbridge Inc.-owned pipeline scheduled 1,674,742 GJ/d to flow through Station 4B for Saturday through Monday, with volumes declining to 1,529,703 GJ on Tuesday.

West Texas gave up a large chunk of the spot price gains recorded earlier in the week. Heading into Friday’s trading, average Waha prices had increased more than $1.50 from the lows set the week before. On Friday, however, Waha fell 86.5 cents to average $1.485.

“A smart pig run from Caprock to Roswell on EPNG’s Line 1300 in southeast New Mexico will reduce throughput capacity for the ”LINCOLN N’ meter to 246 MMcf/d,” Bernardi said. “This meter has been limited for an ongoing force majeure that has been in effect since late December, but even so, its recent 30-day average flow has been just above 400 MMcf/d.

“Flows through this meter, which tracks gas moving northwest across New Mexico out of the Permian, ramped up considerably when EPNG’s Permian North expansion came online at the beginning of December,” he said. “Prior to that expansion, the average flows for November 2018 were 64 MMcf/d. After that expansion on Dec. 5, flows peaked at 539 MMcf/d,” before a force majeure went into effect capping volumes in the mid-400s MMcf/d.