Trading for the week ended June 27 may be something of a watershed for the bulls, with hefty declines in both physical and futures pricing auguring a shift to a lower pricing regime and those campaigning for higher prices based on a large storage deficit throwing in the towel. 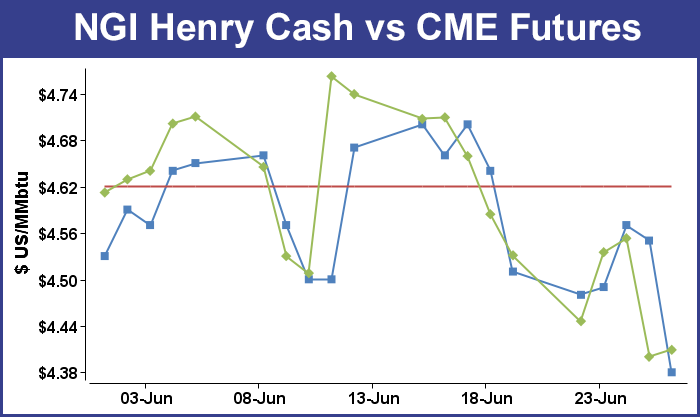 The NGI Weekly Spot Gas Average nationally slipped 15 cents to $4.28 and only a handful of market points in the Northeast escaped the chopping block. The week’s greatest gainers and losers both came from the Northeast and Marcellus points proved to be the big winners. Transco Leidy added 71 cents to $2.85 and gas on Tennessee Zone 4 Marcellus was up by 72 cents to $2.81. On the downside Tennessee Zone 6 200 L tumbled 93 cents to $3.75. All regions were off double digits.

The Northeast once again proved to be the nation’s low cost producer at $3.52, down by 12 cents, and California posted the smallest loss falling a dime to $4.80.

Another outsized storage build in Thursday’s Energy Information Administration (EIA) storage report may have provided something of a tipping point for the market with perceptions, near term at least, that any near term storage deficit is unlikely to produce solid market gains. Once again futures reacted with gusto to a storage report moderately higher than what the market was looking for.

The injection of 110 Bcf was about 3 Bcf higher than market surveys and independent analyst projections, and for the week ended June 20 the EIA reported an increase of 110 Bcf in its 10:30 a.m. EDT release. The expiring July futures dropped to a low of $4.417 shortly after the number was released but by 10:45 EDT July was at $4.4555, down 9.8 cents from Wednesday’s close. At the end of the day and the expiration of the July futures contract, July had settled at $4.400, down 15.3 cents.

The day’s sharp decline in futures trading had some thinking of a realignment of supply and demand. “It would appear that some structural shifts are beginning to develop on both sides of the supply/usage balances that could ease supply concerns considerably, at least until a sustainable hot spell shows up within the forecasts,” a Midwest trader said.

The week prior a stout 113 Bcf was injected, about 3 Bcf more than trader expectations, and three days later July futures were wallowing more than 21 cents lower. Such outsize reactions seem to be the norm these days, and the EIA report for June 20 was also closely watched for variations from market expectations that could lead to similar market gains or losses.

Losses ruled the day. Thursday’s injection of 110 Bcf was about 3 Bcf higher than market surveys and independent analyst projections.

The market was looking at builds in the neighborhood of just under 110 Bcf, not much different than the prior week. Bentek Energy’s flow model predicted an increase of 108 Bcf, substantially higher than last year’s 94 Bcf and a five-year average of 81 Bcf. Other estimates of the EIA report included Houston-based IAF Advisors at a 109 Bcf build and United ICAP at 107 Bcf. A Reuters poll of 22 traders and analysts revealed a sample average of 102 Bcf with a range of 88-112 Bcf.

“Injections started the storage week extremely strong but were cut significantly within the Producing Region as total power burn demand climbed above the 28 Bcf/d mark during the week. Despite the strong power burn, injections within Bentek’s sample of salt dome facilities rose by a total of 1.3 Bcf from the previous week and drove the majority of the sample increases within the region week-over-week. Bentek’s sample of East Region facilities continued to post strong injections as well, with a total sample build of 45 Bcf on the week as Dominion, ANR, NNG and NGPL have continued at a strong pace for June. Last week’s injection could be the last above 110 Bcf until fall, barring a break in temperatures during the peak power demand months of July and August.”

Inventories now stand at 1,829 Bcf and are 690 Bcf less than last year and 822 Bcf below the 5-year average. In the East Region 68 Bcf were injected and the West Region saw inventories up by 17 Bcf. Inventories in the Producing Region rose by 25 Bcf.

Some see ongoing stout production rather than weather as the driver of the soft market. “Bentek has just reported that production has hit a new high,” said a Rocky Mountain producer. “People that think production will drop are missing the boat. It’s not going to happen. You get pipeline maintenance, and gas plant maintenance and that kind of thing temporarily, but that’s the problem. Plus the price of coal isn’t all that great.”

According to market analysts, summer heat better show up soon if the market is going to have any chance of even recovering to earlier highs. “The [Thursday storage] report strongly suggested further production strength into record territory and a larger than expected shift away from gas usage and toward coal by the utilities. While we usually caution against reading too much into one weekly report, we will advise that [Thursday’s] larger than anticipated injection furthered a trend that extends about two months,” said Jim Ritterbusch of Ritterbusch and Associates.

“It would appear that some structural shifts are beginning to develop on both sides of the supply-usage balances that could ease supply concerns considerably, at least until a sustainable hot spell shows up within the forecasts. While current one- to two-week views are favoring some hot temps, the above-normal trends are largely limited to about the eastern third of the nation and are not packing enough punch to spur either speculative or commercial buying interest.

“Although July narrowed its discount against August futures by a slight margin, we viewed the pre-expiry plunge to below the $4.40 level as technically significant. [Thursday’s] July futures low of $4.35 now provides a new downside price parameter [target] for the August contract. By and large, the fundamental inputs of late combined with some significant chart deterioration are forcing us to temper our bullish inclinations. Any existing longs would be advised to employ any rebounds back to today’s highs of $4.60 as an opportunity to liquidate.”

Others also see a plethora of bearish factors in play. Teri Viswanath, who directs natural gas commodity strategy for BNP Paribas, said Friday morning that an abundance of bearish fundamentals is currently weighing down prices, despite the fact that near-term temperature outlooks appear warmer, which should increase the week-on-week demand for electric power.

The bearish fundamentals have rattled into the technical arena. Market technicians now see the bears as being firmly in control. “Will the lows of the outgoing July contract mark the end of an ABC off the $4.891 high (August)? Or will the August contract be able to pick up right where the July contract left off?” said Brian LaRose, a market analyst with United ICAP.

In Friday’s trading physical gas for weekend and Monday delivery fell like a rock. Market points across the board were lower, in some cases by deep double digits, with the East and Northeast taking on the brunt of the selling.

A combination of a weak screen and little need for incremental three-day packages in light of normal weather patterns kept buyers on the bench. The overall average decline was about a quarter. Weather forecasts across the major power grids showed high pressure in play, which was expected to keep warm, humid weather away. At the close of futures trading, August natural gas was down 3.2 cents to $4.409 and September had skidded 3.1 cents to $4.389.

Forecaster WSI Corp. said the New England ISO could expect “high pressure build[ing] into the Northeast during the next two to three days. This should support generally fair and pleasant weather, though a pop-up shower or storm cannot be ruled out each day. High pressure will begin to slide away from the region during the end of the weekend into early next week. This may allow a warmer and more humid south-southwest flow to develop, which may continue the chance of an isolated shower or storm.”

WSI said traders could expect “seasonably warm temperatures, but comfortable humidity levels are expected during the next couple of days. Highs may range in the 70s to mid 80s, coolest along the coast due to a sea-breeze. Lows may cool into the 40s, 50s to near 60. However, it may trend back to the warmer and more humid side during Sunday into early next week with more widespread reading in the 80s to low 90s. Lows may range in the 50s, 60s to near 70.”

Gas for delivery to the Algonquin Citygates for the weekend and Monday was quoted at $3.02, down 74 cents, and packages into Iroquois Waddington were seen 43 cents lower at $4.22. Parcels at Tennessee Zone 6 200 L fell 55 cents to $3.29.

WSI also posted a similar outlook for the expansive PJM power grid. It said “high pressure will nose southward into the region during the end of the next couple of days, though a few isolated showers or storms cannot be ruled out. High pressure will begin to weaken and depart during the weekend into early next week. This will allow for a warmer and more humid south-southwest flow to develop, which may support an increasing chance of scattered showers and storms.”

Boston’s Friday high of 73 degrees was seen increasing Saturday to 80 and reaching 86 on Monday. The seasonal high in Boston is 80, WSI said. New York City’s 80 high on Friday was seen rising to 82 on Saturday and reaching 83 on Monday, one degree off its seasonal norm. Baltimore’s 84 high on Friday was anticipated to hold for Saturday but rise to 86 on Monday. The normal late-June high in Baltimore is 87.

Across the Midwest into the producing regions, next-day gas also swooned by double digits. At the Joliet Hub, weekend and Monday packages fell 19 cents to $4.42, and at the Chicago Citygates parcels were seen at $4.42, down 22 cents. Gas on Alliance shed 17 cents to $4.42. At Northern Natural Ventura, weekend and Monday gas came in at $4.34, down 21 cents, and at Demarcation gas changed hands at $4.34, down 20 cents.

In its Friday morning outlook, Natgasweather.com said longer term it is looking for pervasive warm temperatures. “High pressure has started to surge into the Midwest and Northeast and with it will come warmer temperatures. There have been discrepancies in national forecasts regarding how a chilly weather system moving into the northern Rockies influences weather conditions over the Midwest and Northeast next week. No worries; the ridge will do a fine job of stalling and deflecting it into southern Canada.

“That is not to say the Midwest won’t get a glancing blow with several degrees of cooling, but the more intense cold air will remain Canada. After this nuisance system quickly departs late next week, high pressure will rapidly expand and cover much of the U.S. with very warm to hot temperatures as widespread 90s cover many regions.”