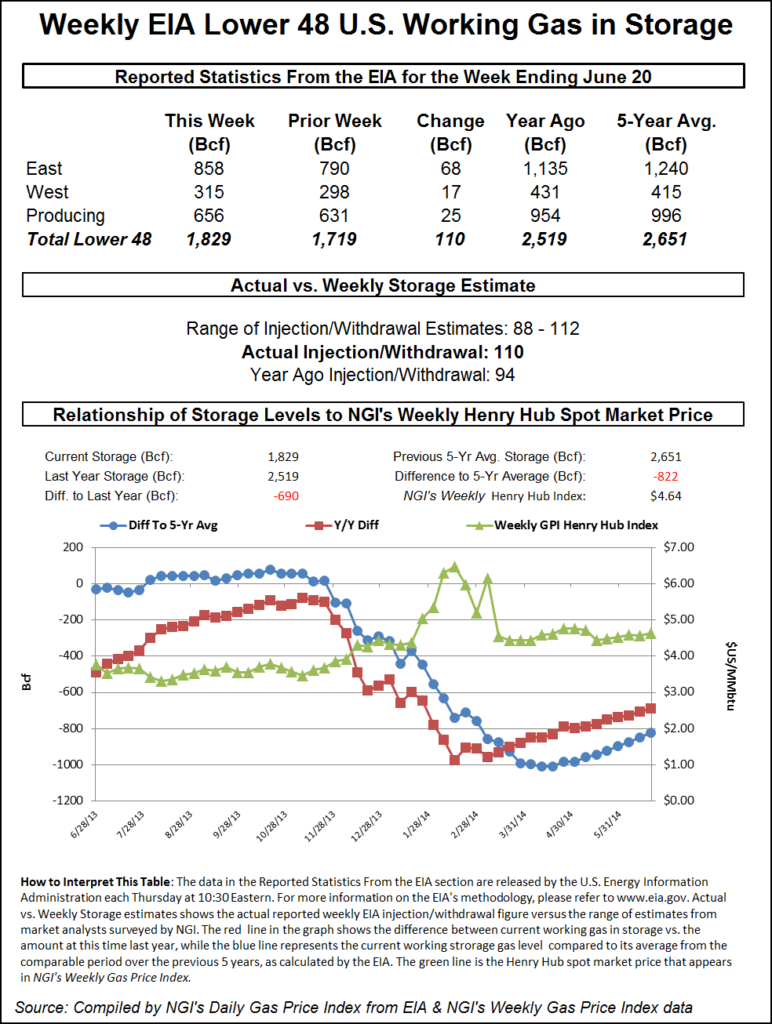 Following the release of government storage figures that were on the high side of what the market was expecting, the market dropped sharply Thursday. The injection of 110 Bcf was about 3 Bcf higher than market surveys and independent analyst projections. For the week ended June 20, the Energy Information Administration (EIA) reported an increase of 110 Bcf in its 10:30 a.m. EDT release. The expiring July futures contract dropped to a low of $4.417 shortly after the number was released, but by 10:45 a.m. July was at $4.455, down 9.8 cents from Wednesday’s settlement.

“The market made a quick run to the downside, then recovered pretty quickly,” said a New York floor trader. “This was not the effect you would think.” He noted that this was the 10th week in a row where injections have exceeded the five-year average, but “what do the bears have to show for it? Not much.”

Others think bears may reap gains in the weeks and months ahead. “The 110 Bcf net injection to U.S. natural gas storage for last week was a clear bearish surprise, exceeding both the consensus expectations for 102-105 Bcf and our model’s 93 Bcf forecast,” said Tim Evans of Citi Futures Perspective. “Although there may be some minor changes in underlying demand contributing to this surprise, our guess is that this represents a step up to a higher production level, with bearish implications for the weeks ahead as well.”

Inventories now stand at 1,829 Bcf and are 690 Bcf less than last year and 822 Bcf below the five-year average. In the East Region 68 Bcf was injected and the West Region saw inventories up by 17 Bcf. Inventories in the Producing Region rose by 25 Bcf.

The Producing region salt cavern storage figure increased by 8 Bcf from the previous week to 185 Bcf, while the non-salt cavern figure rose by 17 Bcf to 472 Bcf.