Natural gas futures dropped Thursday morning following the release of government storage figures that were somewhat on the high side of what traders were expecting. 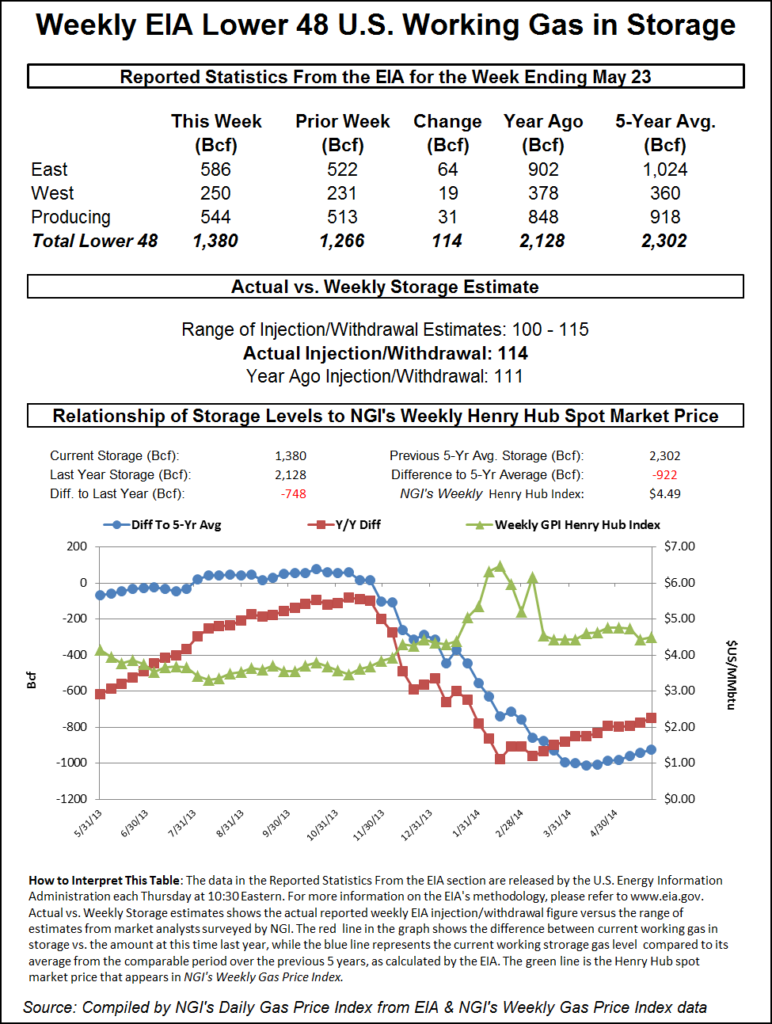 The injection report of 114 Bcf was about 4 Bcf higher than market surveys and independent analyst projections. For the week ended May 23, the Energy Information Administration (EIA) reported an increase of 114 Bcf in its 10:30 a.m. EDT report. July futures fell to a low of $4.529 shortly after the number was released but by 10:45 a.m. July was at $4.587, down 2.8 cents from Wednesday’s settlement.

Prior to the release of the data, analysts were looking for a build just above 110 Bcf. A Reuters survey of 24 traders and analysts revealed an increase of 110 Bcf with a range of 100 Bcf to 115 Bcf. United ICAP forecast a build of 113 Bcf and Bentek Energy’s flow model anticipated an injection of 111 Bcf.

A New York floor trader remarked that with the reaction to the storage report “nothing has really changed. We are still in the range of $4.25 to $4.75. It’s not an ‘a-ha’ moment. It was not a significant development.”

Tim Evans of Citi Futures Perspective sees the figure “implying a further modest weakening of the background supply-demand balance that could carry over into future periods. The build was also a clear step up from the 93 Bcf five-year average for the period, with a further 21 Bcf decline in the year-on-five-year average deficit.”

Inventories now stand at 1,380 Bcf and are 748 Bcf less than last year and 922 Bcf below the five-year average. In the East Region 64 Bcf was injected and the West Region saw inventories up by 19 Bcf. Inventories in the Producing Region rose by 31 Bcf.

The Producing region salt cavern storage figure increased by 12 Bcf from the previous week to 152 Bcf, while the non-salt cavern figure rose by 18 Bcf to 391 Bcf.