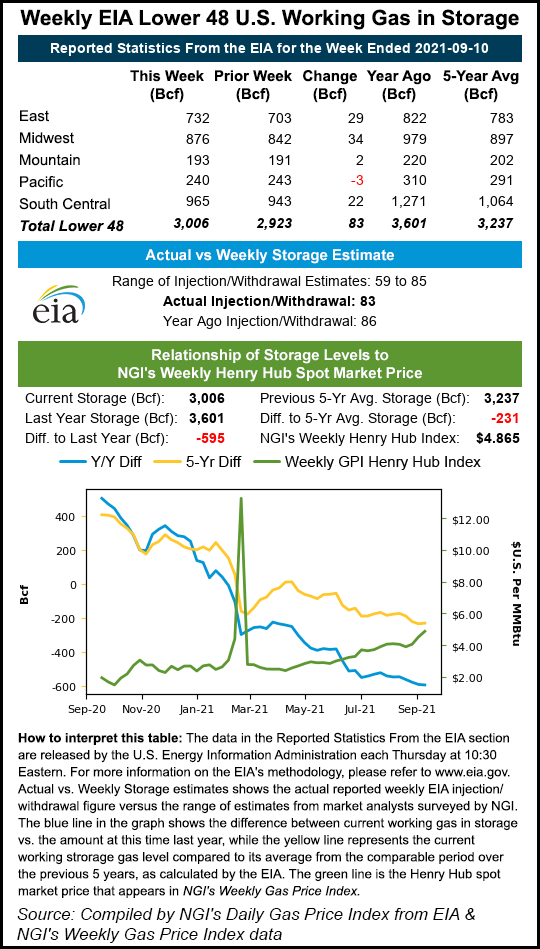 Ahead of the EIA report, the October contract was down 15.3 cents at $5.307/MMBtu, in part because of profit-taking after a surge over the three prior days that lifted futures to fresh 2021 highs.

Participants on The Desk’s online energy platform Enelyst said the aftershocks of Hurricane Ida – cooling rains and flooding — appeared to impact demand during the covered week more than expected. That resulted in a solid increase in South Central storage, in addition to gains in the Midwest and East.

Prior to the report, a Wall Street Journal survey landed an average build estimate of 74 Bcf, with a range of 59 Bcf to 80 Bcf. A Reuters poll found injection estimates spanning from 59 Bcf to 85 Bcf, with a median of 77 Bcf.

NGI estimated a 72 Bcf increase for the report. The prior five-year average was an increase of 79 Bcf. For the comparable week a year earlier, EIA recorded a build of 86 Bcf.

Despite the initial response from traders, Bespoke Weather Services cautioned against reading too much into a single week’s result. The firm noted that injections have generally been light throughout the summer as scorching heat fueled elevated domestic cooling needs and robust demand for U.S. exports of liquefied natural gas (LNG). Buyers in Europe are paying a premium for U.S. LNG to address depleted stockpiles throughout that continent before winter.

Bespoke noted that the United States is on track to fall short of 3.5 Tcf of gas in storage by the close of October, when injections typically end. If the coming winter proves harsh, supplies could run low, the firm said. Worries about that possibility ignited the futures rally earlier this week.

“We do not feel this number tells us much, as some of the bigger build is still due to Ida’s impact,” Bespoke said of the EIA print. It is “not something the market is likely to view as a game-changer that solves the storage situation as we head toward the winter season.”

The Midwest and East regions led with builds of 34 Bcf and 29 Bcf, respectively, according to EIA.

The South Central build of 22 Bcf followed and included a 13 Bcf injection into nonsalt facilities and an increase of 9 Bcf into salts.

Bespoke said U.S. gas buyers may need to drive up prices even further to slow LNG exports and keep more gas in the Lower 48. Analysts at both Morgan Stanley and Goldman Sachs have cautioned that natural gas futures could reach the $10.00 level this winter.

Analysts said if demand for natural gas remains elevated, it could galvanize some European countries to consume more oil-based products, such as diesel to fuel refineries, adding to upward pressure on crude prices as well.

The margins for refineries in Europe “are getting crushed when adding the price of natural gas to their fuel mix,” said analyst Scott Shelton of ICAP Technical Analysis.