Natural gas futures floundered Monday as the prospect of a coronavirus resurgence and the potential for weak weather demand extending into December weighed on markets. The December Nymex contract dropped 27.6 cents day/day and settled at $4.789/MMBtu. January fell 28.4 cents to $4.861. 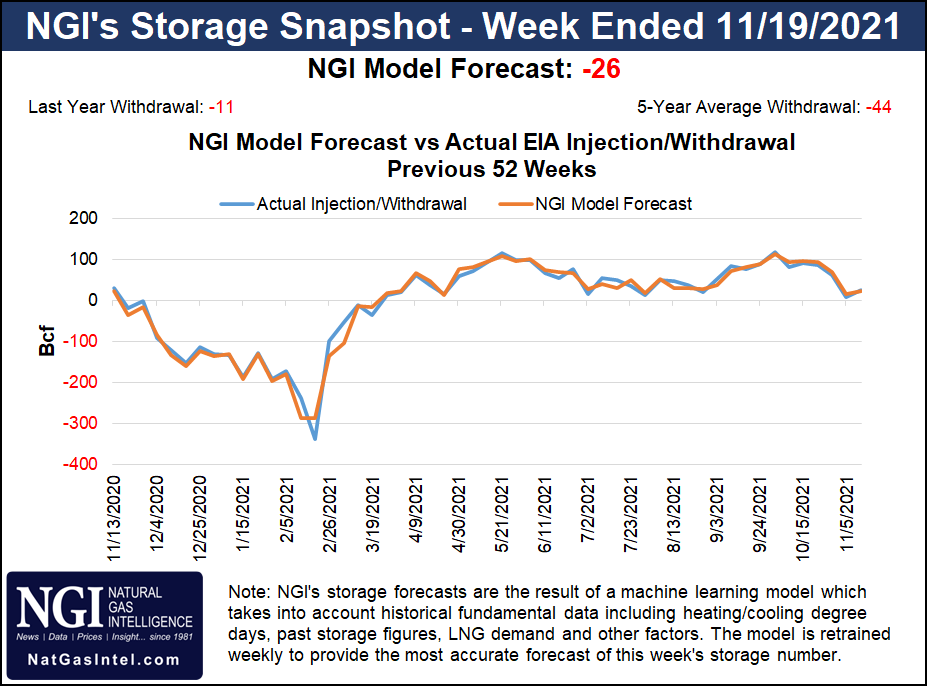 In contrast, NGI’s Spot Gas National Avg. gained 37.5 cents to $5.255, boosted by a surge in prices at Northeast hubs.

Last week, the prompt month rallied four out of five trading sessions, bolstered by lofty levels of U.S. liquefied natural gas (LNG) exports. LNG volumes held strong Monday – near record levels around 12 Bcf – and demand was expected to persist given European supply shortages and the arrival of winter weather on the continent.

However, domestic weather outlooks, already dubious, shifted unfavorably for natural gas bulls over the weekend. Compared to Friday’s forecast, the most substantial change in the temperature outlook occurred during the Dec. 2-Dec. 6 timeframe, according to Maxar’s Weather Desk.

“The change is a result of a deeper trough over the eastern Pacific, alongside waning of the North Atlantic block,” the firm said in a Monday forecast. “This allows for a much warmer pattern for most of the U.S. and Canada, where belows are limited to the East Coast at the start of the period.”

The forecast showed “widespread” above and much above normal temperatures over the western and central regions of the Lower 48 in early December, with the warmer conditions expected to “shift eastward” by the second week of next month, Maxar added.

NatGasWeather similarly highlighted warmer trends for the Dec. 1-7 time frame, when “almost the entire U.S.” is expected to see temperatures of around 10-30 degrees above normal.

“The focus this week is likely to turn to how long the coming warmer than normal early December U.S. pattern lasts, because the further into December it takes for blue weather maps to return, the more pressure it puts on bulls to reduce risk,” NatGasWeather said.

Will Utilities Withdraw Gas From Storage?

Early expectations for Wednesday’s Energy Information Administration (EIA) storage report for the week ended Nov. 19 – scheduled a day earlier than usual because of the Thanksgiving Holiday — point to a draw in the 20s Bcf, NatGasWeather said.

That would not only mark the onset of withdrawal season but the first pull would be lighter than the five-year average.

“This would further improve deficits versus the five-year average from 81 Bcf to near 60 Bcf” and reflect light demand for this time of year, the firm added.

On the bulls’ side, while strong by pandemic standards near 96 Bcf over the past week, production has leveled off from autumn highs around 97 Bcf, EBW Analytics Group noted.

“Core fundamentals are strengthening modestly,” the analysts said Monday, “with LNG demand hovering within a hair of new records and production continuing to edge lower off early-month highs.”

“With infection rates surging across much of central and western Europe, Austria announced an initial 10-day national lockdown” beginning Monday, as infections increased sevenfold in the country since early October, the TPH team said.

“Germany, Europe’s largest economy, has also seen a dramatic spike in case rates” – a sixfold surge since early last month – “and the health minister refused to rule out an additional lockdown for the country of 83 million.” The country consumes around 9 Bcf/d of natural gas, according to the analyst team.

“The specter of increased restrictions across the continent and risk that North America follows a similar trajectory in the winter months threw the recovery trade in reverse,” the TPH analysts said, putting pressure on energy commodities.

Rystad Energy analyst Louise Dickson agreed, adding that new lockdowns, even if temporary, could hamper energy demand broadly – from economic interruptions — and oil demand in particular. “What the market will now be focusing on is mostly the gravity of the pandemic’s next wave,” Dickson said.

“The decision to re-lockdown countries is not taken lightly, given the political unpopularity it carries, but as hospitals are again overwhelmed with cases, governments are taking drastic measures that imply very real downside risk for not only oil demand, but economic recovery,” Dickson said.

Cash prices climbed on Monday, led higher by a spike in Northeast prices.

While the December outlook is bearish to date, NatGasWeather said a wintry mix of rain and snow would track across the Great Lakes into the Northeast through Tuesday this week. This will usher in frosty highs of 30s to 40s and lows of 10s to 20s, the firm said, galvanizing natural gas demand.

Prices retreated in most other parts of the country amid benign weather.

Most of the western and southern United States enjoyed highs of 50s to 70s Monday, NatGasWeather said. The mild conditions were projected to last through the week.

The firm said the East would see a brief midweek warmup, with highs of 40-60s. “However, a fresh cold shot will drop into the Midwest and track across the East Friday-Saturday with lows of 10s to 30s for a swing back to stronger national demand.”

The chilly conditions in the East are expected to hang around into the final days of November, but temperatures are then expected to warm above normal early next month. At the same time, “the western, central, and southern U.S. will be warm versus normal, with highs of 50s-70s for light demand.”

Because of severe weather in Western Canada last week, Westcoast shut down a portion of its pipeline system. Torrential rain and flooding in British Columbia caused mudslides and necessitated the temporary closure.

Cash prices at Northwest Sumas sailed higher last week as a result but tumbled back to reality on Monday, falling $1.375 to $4.675.