As the rains battered the upper Texas coast and beyond Thursday, a weekly storage report that topped expectations put a damper on natural gas futures prices, sending the prompt month lower for a third straight session. The October Nymex contract plunged 9.9 cents to settle at $2.538/MMBtu, near the day’s low at $2.530. November dropped 9.6 cents to $2.569. 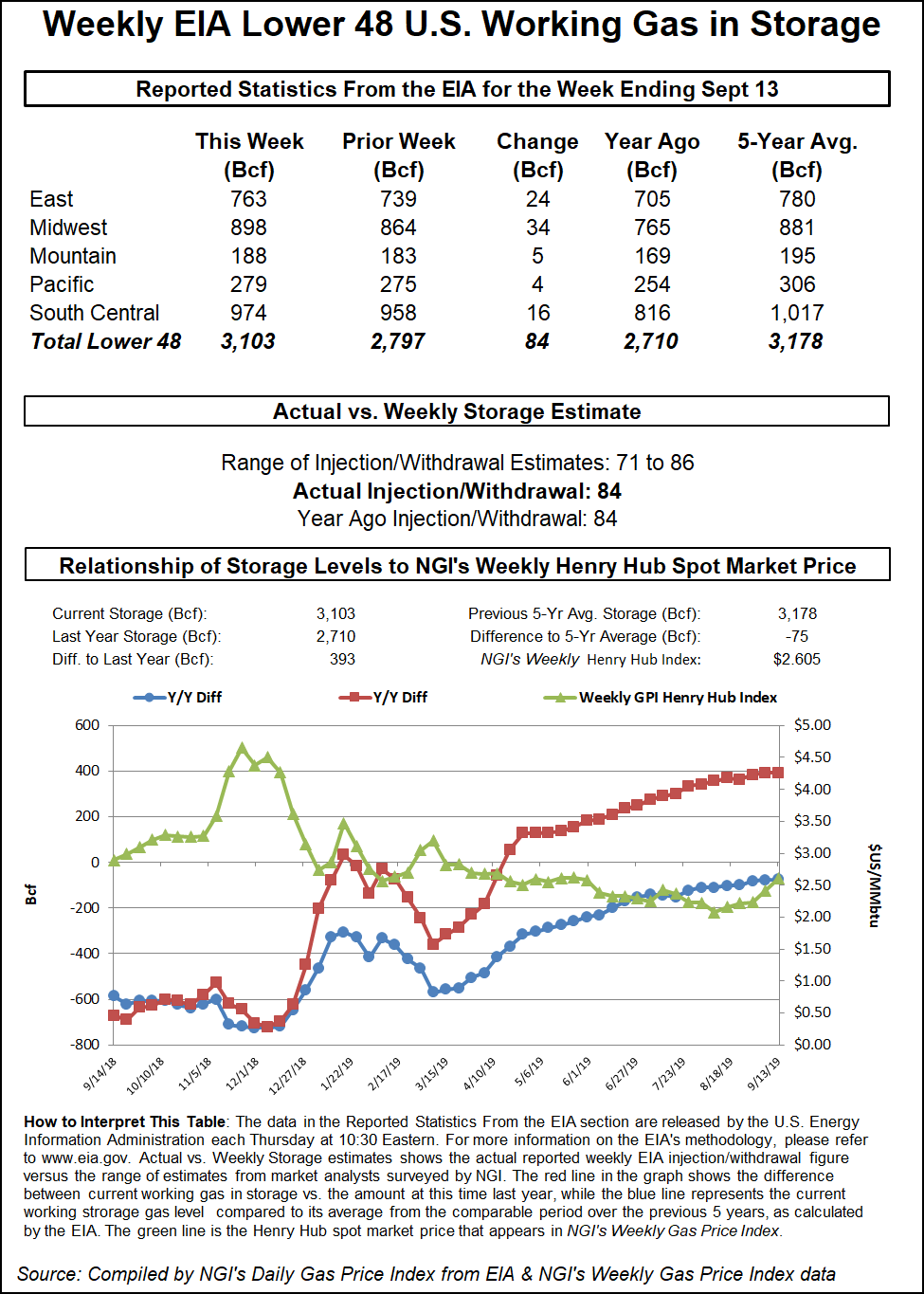 The Energy Information Administration (EIA) on Thursday reported an 84 Bcf injection into U.S. natural gas stocks for the week ended Sept. 13, topping consensus expectations. That matches the 84 Bcf build EIA recorded for the year-ago period and is slightly higher than the five-year average 82 Bcf injection.

As the number crossed trading screens at 10:30 a.m. ET, the October Nymex contract, already down several cents in early-morning trading, sold off further, from around $2.590/MMBtu to as low as $2.555. The downtrend continued further from there, as the prompt month cycled between $2.530 and $2.550 for most of the remainder of the session.

Prior to the report, market observers had been looking for a build in the upper 70s Bcf, with predictions ranging from 71 Bcf to 85 Bcf. Intercontinental Exchange futures had settled at 81 Bcf, while NGI’s model predicted a 79 Bcf build.

By region, the Midwest posted the largest weekly injection at 34 Bcf, followed by the East, which refilled 24 Bcf for the week. The Mountain region injected 5 Bcf, while the Pacific injected 4 Bcf. In the South Central, 15 Bcf was injected into nonsalt stocks, along with 1 Bcf into salt, according to EIA.

According to Bespoke Weather Services, the selling Thursday was “initially led by weaker cash prices” before the bearish EIA report pushed the futures even lower.

“This is reflective of very loose balances and sent prices quickly into the $2.50-2.55 range, which we felt would ultimately come, but we arrived there faster than expected,” Bespoke said. “The near-term weather pattern remains hot, which is known by the market at this point, but could keep cash prices firm enough and burns strong enough to hold the support level around $2.50 for now.

“But over the next couple of weeks, a continuation of the above-normal temperature pattern, which we are expecting to see…will transition into a bearish factor” as the market reaches the time of year when heating demand typically outweighs cooling demand. “If we do not see some material tightening in balances, the support level at $2.50 could have a more difficult time holding.”

Spot prices tumbled along the Gulf Coast Thursday as parts of Texas and Louisiana were under threat from torrential rainfall. Henry Hub tumbled 9.0 cents to $2.590, while Houston Ship Channel slid 9.0 cents to $2.540.

Images of inundated roads and houses spread across social media as Imelda’s rains battered the region, recalling the devastating flooding Hurricane Harvey caused two years ago. The NHC said some areas of far southeast Texas were expected to see isolated rainfall totals of 30-40 inches from the storm.

“Simply put, all heck is breaking loose across the city” is how Houston-area forecaster Eric Berger of Space City Weather put it. “Unfortunately, while we knew heavy rainfall was likely in parts of the city” Thursday, “we did not anticipate an event as significant in scope as this.”

Operators of oil and gas infrastructure in the region were closely monitoring the storm, but there appeared to be few public reports of problems at Houston Ship Channel facilities or liquefied natural gas (LNG) export terminals.

Cheniere Energy Inc. said its Sabine Pass LNG terminal was continuing to operate Thursday. “We are of course monitoring the storm and our primary goal is to ensure our people are safe, but as of now, there are no impacts to operations at Sabine to report,” a spokesperson told NGI.

A spokesperson for Cameron LNG said employees at the facility that is sited along the Calcasieu River in Louisiana, were experiencing rain but no flooding Thursday. Freeport LNG on the upper Texas coast was similarly weathering the storm, continuing operations as normal, according to a spokesperson.

NatGasWeather said Imelda was expected to “cool highs into the 80s within its influence for lighter demand compared to away from the storm where highs in the 90s will occur.”

As for the broader pattern across the Lower 48 over the next week or so, “strong high pressure continues across Texas and the South with highs of 80s to 90s for strong late-season demand…The western and central United States will be unsettled as weather systems bring showers and highs of mostly 60s and 70s, with lows of 30s and 40s. The corridor from Chicago to New York City will be comfortable with highs of 70s to 80s for light demand.”

Most locations throughout the Midwest and Northeast saw hefty discounts Thursday. Joliet dropped 15.5 cents to $2.210, while Transco Zone 6 NY tumbled 29.0 cents to $1.720.

Meanwhile, a force majeure on the Valley Crossing pipeline in South Texas could impact exports on the Sur de Texas-Tuxpan pipeline in Mexico just as commercial operations have started on the marine pipeline, according to Genscape Inc.

In a notice to shippers, Valley Crossing said that based on recent nominations it did not anticipate any impact on natural gas flows from the event, caused by a mechanical failure at a unit of the Agua Dulce compressor station in South Texas. But the operator cautioned that it “may impede transportation of natural gas on the pipeline dependent upon future demand at deliveries on the Nueces Header and into the Brownsville Pipeline.”

Valley Crossing has been delivering an average of 498 MMcf/d to the Sur de Texas-Tuxpan line, which officially started commercial operations on Tuesday after months of delays and tense contract negotiations with Mexico’s ComisiÃ³n Federal de Electricidad.

“Genscape’s Mexico gas team has noted in alerts and its weekly report that they expect flows on Sur de Texas will actually be smaller through the end of the month in order for Mexico to accommodate already-contracted LNG cargoes,” Genscape senior natural gas analyst Rick Margolin said. “Our Mexico gas team does not expect Sur de Texas to sustain higher flows until October.”