The British Columbia (BC) environmental agency has taken over as the federal counterpart has stepped aside from the assessment of native-owned Cedar LNG, the liquefied natural gas (LNG) export project proposed for the northern Pacific coast at Kitimat. 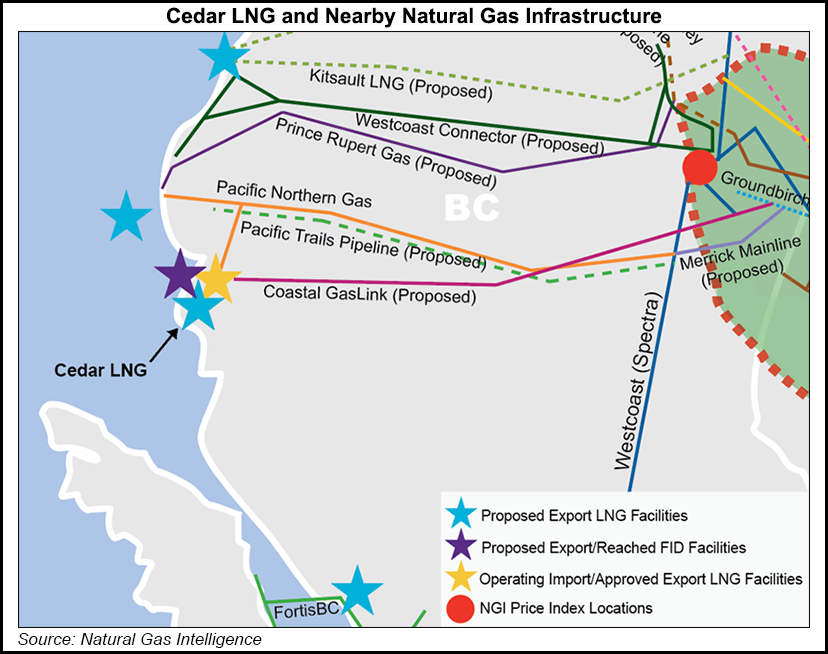 The switch includes a strengthened native say in the project’s fate. The BC regulatory blueprint grants affected a tribal role in a working group, as advisers on every step of the case from setting application requirements to establishing approval conditions.

A federal-provincial “substitution agreement” transferred conduct of the Cedar LNG review to the BC Environmental Assessment Office from the five-month-old national Impact Assessment Agency of Canada (IAAC). Federal officials keep rights to participate in the case, and the national environment minister retains final say on approval.

The increased native role in decision making obeys the IAAC’s mandate and BC legislation that adopts consultation and consent principles of the United Nations Declaration of the Rights of Indigenous Peoples (UNDRIP). The federal Liberal government has promised legislation to import a national version of UNDRIP.

As a terminal forecast to cost C$1.8-2.5 billion ($1.4-1.9 billion) for capacity to export 400-500 MMcf/d, Cedar LNG stands out as the biggest item in a native switch from opposition to participation in the province’s growing gas industry.

The native project relies on the LNG Canada supply pipeline under construction across northern BC, Coastal Gaslink. Cedar LNG plans to draw its gas from an eight-kilometer (five-mile) link into the long conduit for up to 5 Bcf/d.

Other tribes are participating in the northern LNG action. All 20 native communities along 670-kilometer (402-mile) Coastal Gaslink have signed cooperation and benefits agreements. The project in turn has showered the tribes with jobs and contracts.

Only a small cluster of self-declared “traditional chiefs” midway along the route opposes the pipeline. A court injunction prohibits interference with construction, and enforcement has begun with police control on traffic into the sore spot and a criminal investigation into guerrilla resistance with roadside firebombs and falling-log traps. A provincial mediation effort is underway.

Cedar LNG, LNG Canada and Coastal GasLink have provincial-wide native support from a First Nations LNG Alliance. Chevron Canada Ltd. and Woodside Energy Ltd. in December also received federal approval to double the size and planned lifespan of KM LNG to export 35 Tcf/year from their still unsanctioned project that would be sited in the province.

Cedar LNG is forecast to employ 350-500 construction workers and create 70-100 permanent terminal operator jobs, with natives filling much of the payrolls. The Haisla said they are considering a 15-year extension of their project’s gas export license to a 40-year term.