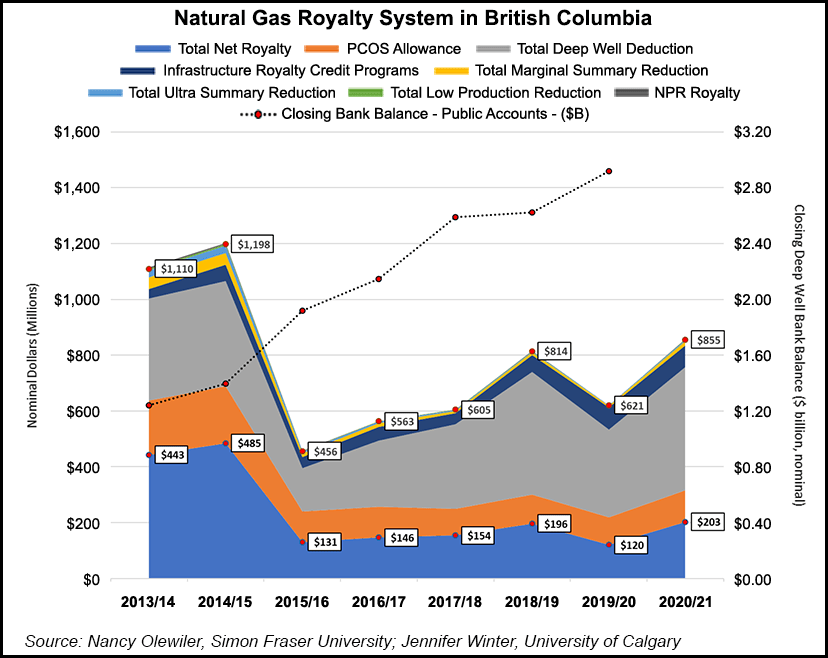 “The BC royalty system for natural gas and oil is broken,” according to a government-commissioned preliminary report. The assessment was done by professors Nancy Olewiler at Simon Fraser University in Vancouver and Jennifer Winter at the University of Calgary.

The assessment serves as a launching pad for a comprehensive review of the royalty system. Established in 1992, the BC royalty structure “does not support and contribute to government and societal goals,” the co-authors said in the 106-page report.

The provincial royalty regime “consists of piecemeal modifications to a system that was designed for a different era with different risks, technology and market conditions,” according to Olewiler and Winter.

The review reflects differences between royalty systems in place in Canada and the United States. Natural resources are provincial Crown property. Provinces often keep mineral rights as government wealth generators by “reserving” them out of private and municipal land surface titles.

In BC, 95% of fossil fuel rights belong to the provincial government. Royalties are levied on 35,917 active mostly gas and liquid byproducts wells. With LNG exports expected to begin in 2024-25, BC has granted licenses for 8,598 more wells.

Despite industry growth, the professors calculate that the effective royalty rate that determines the government share of total BC gas and oil production income fell to 2.4% in 2020 from 8.4% in 2013.

BC royalties have never recovered to their peaks of C$1.9 billion ($1.5 billion) for gas in 2005 and C$136.5 million ($109 million) for oil, according to the authors. They said glutted markets contributed to BC revenue erosion because persistently poor gas and oil prices automatically drove down rates set by a progressive, ability-to-pay scale that sets them.

But policy wrinkles worsen market effects, the professors suggested in a detailed review of incentive schemes enacted to preserve and expand northern BC industry.

A complex formula sets production values for royalty purposes at processing plant inlets instead of at outlets where markets dictate prices. Credits against royalties for deep wells and associated infrastructure such as roads and bridges create continuing revenue drains, they said.

Ralston promised to “work toward an overhaul of the current system that eliminates outdated, inefficient fossil-fuel subsidies and ensures British Columbians get a fair return on our resources.”

The ministry set a brisk schedule for the royalty review. After collecting responses to the professors’ report, the government plans to release a discussion paper in November and an “outcomes” report in February following public and industry consultations.