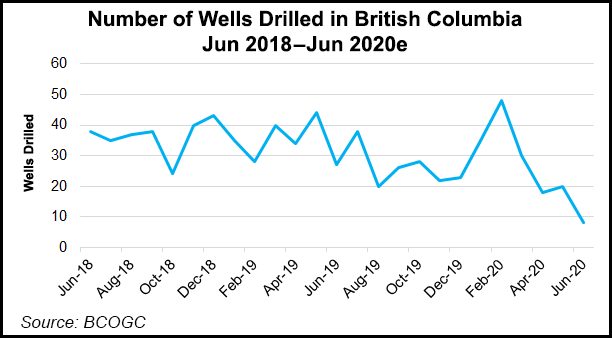 British Columbia (BC) on Monday launched a C$50 million ($38 million) first stage of its share in Canada’s government-financed Covid-19 pandemic relief program to clean up depleted and abandoned oil and gas wells.

Contracts to seal and reclaim 1,880 dormant wells were awarded to 79 service firms that expect to employ about 1,200 workers on the assignments in northern production fields, said BC and federal resources, energy and environment ministers.

The Canadian government in April had launched a C$2.47 billion ($1.8 billion) wells and emissions cleanup program to salvage jobs during the industry slump caused by the Covid-19 virus pandemic and fallen energy prices.

Similar but larger federally financed discarded well cleanups are underway in Alberta and Saskatchewan, which are receiving C$1.4 billion ($1.1 billion) or 82% of the total C$1.7 ($1.3 billion) aid program.

The top share of the national grant program, C$1 billion ($750 million), goes to Alberta, which has a generations-old and growing backlog of 96,969 depleted and dormant wells. The program is forecast to support 5,200 jobs in Alberta alone.

The federal aid also provides a C$200 million ($150 million) loan to the Alberta Orphan Well Association, an industry and government agency responsible for cleaning up facilities deserted by bankrupt or disbanded oil and gas producers.

The federal government “is supporting workers across Canada and across sectors that face this crisis to support jobs today and ensure a strong, fair and cleaner Canada,” said the announcement of the BC share in the wells cleanup.