A British Columbia (BC) trial court has directed the provincial government to build Indigenous rights into strengthened regulation of the Montney Shale region, but stopped short of handing out injunctions that would have halted natural gas supply development. 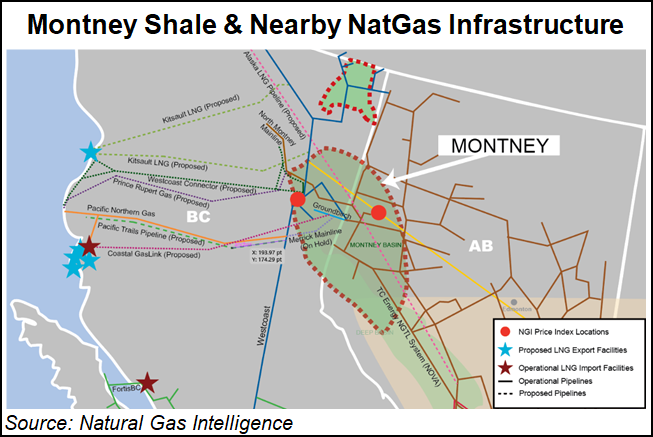 After a six-year review of cumulative effects on the Blueberry River First Nations that included a 160-day trial, Judge Emily Burke granted legal “declarations” that demand recognition of rights violations and action to prevent more damage.

The declarations say the province broke Canada’s 1899 Treaty 8 with tribes across a region covering northern BC and Alberta that is bigger than France. Blueberry’s 15,200-square-mile traditional territory includes the production heartland of the Montney formation.

“The province may not continue to authorize activities that breach the [treaty] promises,” Burke’s verdict said.

The provincial government and Blueberry River “must act with diligence to consult and negotiate for the purpose of establishing timely enforceable mechanisms to assess and manage the cumulative impact of industrial development.”

Burke’s verdict included strongly worded calls for building recognition of Indigenous rights into drilling lease sales by the BC Energy Ministry and field activity approvals by the BC Oil and Gas Commission.

Provincial officials “candidly admitted” they lack authoritative “tools” such as project screening procedures to address concerns voiced by tribes even when they want to help, the judge said.

“The best they could do was ‘mitigate’ an adverse effect. They could not say no to a permit or activity based on an identified concern about impacts on the exercise of treaty rights. That persistent reality has contributed to a compilation of adverse effects – or as is said – ‘death by a thousand cuts,’” according to Burke’s verdict.

As declarations instead of tougher injunctions, Burke’s calls for action stayed consistent with decisions during the case. Court rulings rejected Indigenous demands for stop-work orders and judicial review of a provincial royalty deal with five gas producers.

But the judge’s final verdict stands out as “very strong protection of our treaty rights for the future,” according to a statement by Blueberry River leaders.

“The province is no longer permitted to authorize industrial development in a way and scale that continues to infringe our rights, without our input or taking into account cumulative effects on our treaty rights.

“The province must now work with us in a new way to develop an approach that protects our territory and recognizes our rights.”

Next steps will be determined by a review of the “long and complex” decision, the ministry said.

“We recognize the urgency. This work is a priority,” given the six-month timeline established by the court, the ministry added.

When dealing directly with industry, northern BC tribes accept projects, including pipelines, an approach that allows them to participate and earn rewards.