The British Columbia (BC) and Alberta governments set out separately Thursday to rekindle the sagging Western Canadian natural gas industry by offering tax and royalty cuts to projects that would soak up surpluses depressing prices and drilling. 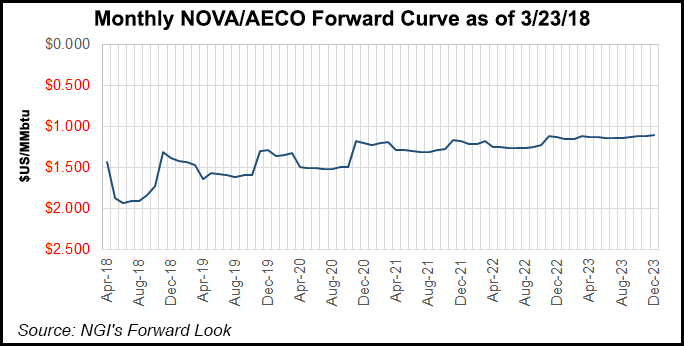 In Alberta the 2018-19 provincial budget, introduced by Finance Minister Joe Cici, laid out C$1 billion ($800 million) in royalty breaks, loan guarantees and grants for petrochemical and processing projects that use gas and liquid byproducts.

The consortium did not immediately rise to the BC bait, which Horgan described as an offer open until November. Company officials called the package timely and important but made no promises.

LNG Canada’s status remains unchanged: lining up construction contractors, paring down costs and aiming for a final investment decision this year. Federal government favor is also sought in Ottawa, in the form of exemptions from a national tariff wall against cheaply priced imports of Asian industrial hardware.

Counting TransCanada Corp.’s allied Coastal Gaslink pipeline project from northeast BC to the Pacific coast plus extensive unconventional drilling, the BC government predicted LNG Canada would add up to a C$40 billion ($32 billion) investment. Up to 10,000 combined construction and field development jobs are also forecast.

Horgan estimated the BC tax cuts would reduce LNG Canada-fueled government revenue to C$22 billion ($17.6 billion) from a forecast of C$28 billion ($22.4 billion) for an unchanged regime over the 40-year life of the project.

The Alberta industry also greeted the financial incentives offer with moral support but no immediate decisions to move proposed projects into construction. However, a previous version of the Alberta program scored a success in December, when Inter Pipeline Ltd. announced a 2018 start on three years of building a C$3.5 billion ($2.8 billion) plant to make 525,000 tons of polypropylene per year from 22,000 b/d of propane from Alberta gas producers.

The Alberta scheme provides royalty credits to project builders, as items to trade for raw material supply commitments. The petrochemical and processing support is billed as economic diversification for the province.

In BC, the LNG offer inspired a threat by the Green Party, which holds the balance of power in the provincial legislature, to vote out the minority New Democratic Party and trigger an election.

But the Greens granted Horgan time until November to square the gas export plan with official BC vows to cut greenhouse gas emissions.

The Greens showed willingness to compromise last fall by accepting construction of a mammoth Peace River hydroelectric dam that they opposed before winning their legislature kingmaker role in May 2017.