Expectations that maintenance projects that were deferred in the U.S. onshore last year would resume early in 2016 haven’t panned out as expected, Basic Energy Services Inc. CEO Roe Patterson said Thursday. However, production-related activities “appeared to have stabilized” in March, and there’s optimism, however slight, that work is improving steadily. 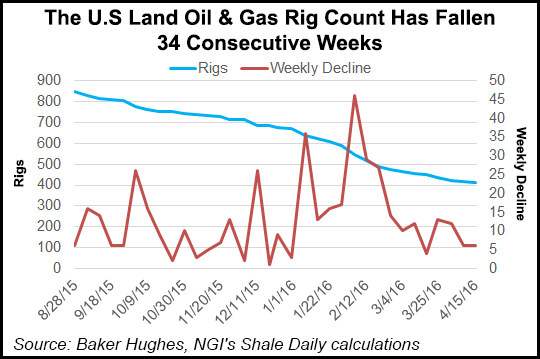 The Fort Worth, TX-based oilfield services (OFS) operator provides well site services, including hydraulic fracturing (fracking) and fluid services, for oil and natural gas wells in more than 100 service points across the U.S. onshore, including in Texas, Louisiana, Oklahoma, New Mexico, Arkansas, Kansas, the Rocky Mountains and in Appalachia.

There’s no doubt that business continued to decline sharply from a year ago. Net losses totaled $83.3 million (minus $2.00/share) from year-ago losses of $32.6 million (minus 81 cents). Revenue slumped from the fourth quarter by 19% to $130.4 million and was down from year-ago revenue of $261.7 million.

For Basic, the low levels of activity, driven by volatile energy prices and a “significant” impact from winter weather said it all. The confluence of events “pushed customers to postpone a growing inventory of maintenance and workover projects,” Patterson told analysts during a conference call.

At the end of March, Basic had stacked a total of 134,000 hydraulic hp. It also had stacked additional well servicing rigs to bring its total stacked rig inventory to 127. The completion and remediation services unit contributed only 12% of total revenue in 1Q2016, versus 28% in the year-ago period. Fluid services revenue contributed 18.1% to profits, versus 26.7% a year ago, while well servicing provided 11.4% from 17.7%. In contract drilling, segment losses as a percent of revenue were a minus 3.8%, compared with a year ago when revenue contributed 34.4% to profits.

However, no thumb twiddling allowed. Work or no work, the operator has a “monthly program for every single piece of equipment that’s stacked,” Patterson said. “This includes our blenders, hydration units, all the pumps, frack…you name it. We start it, we turn it, we try to engage the horsepower as much as we can to put it under some stress so that we keep the equipment in the most optimal shape that we can put it in…Obviously, we’re not hooked up to anything…and it’s hard to get a load on it, but we do the best we can to make sure it’s in great operating condition…

“There’s a cost associated with that,” and while Basic isn’t the only OFS operator keeping its equipment ready to go, there’s “all the stacked horsepower that’s out there in the rest of the country, especially the stuff that’s buried in the back of the yard [by competitors],” which is not being maintained, he said.

“We track every piece of equipment and the cost to bring each piece of equipment back up to what we would call ‘the perfect condition,’ ready to deploy,” Patterson said. “We still think that number is under about 10 cents on the $1.00, versus the replacement cost. It’s about 7.5 cents for us right now, versus what we think replacement cost would be, which is about $750 to $800 per horsepower.”

So for Basic, unstacking equipment will not be a problem. “Finding crews will be the problem,” the CEO said.

It’s a double dilemma confronting every OFS operator in the onshore. Is the equipment going to be ready to go? And are there people willing to take another chance on the oil and gas industry after being laid off?

Basic, unlike many of its competitors, performed a lot of smaller frack jobs during the peak of the U.S. shale boom, which means it used lower rated horsepower equipment, which has extended its life, Patterson said. The company also bought a lot of horsepower before the oil price slump in 2014, which means it has a younger fleet.

“We’ve got some older pumps that probably will never go back to work, but it’s a small amount of our overall fleet,” Patterson said. The bigger question, he asked, is how much of the overall industry fleet was already at the end of its useful life when it was stacked?

“The dollar amount to bring that stuff back to work is considerably more than 10 cents on the dollar versus replacement costs,” he said. “It’s probably running closer to 50, 60, 75 cents on the dollar for new costs. At that point, you are better off building a new pump and not sinking that money into an old pump.

“So, there’s a huge portion of the 18 million horsepower that’s out there that was already at the end of its useful life when we stacked it during 2015 as an industry. That’s the portion that’s probably what people don’t recognize. And we’ve got some other fleets out there, some other competitors that we’ve seen, that have stacked their equipment, cannibalized their equipment…They may talk about a stacked fleet that’s ready to go back to work, but when you look at it, it’s missing engines, it’s missing transmissions, the fluid ends are all robbed off of it. I mean, you’re talking about some primary components there.”

It’s going to take some “big” capital expenditures (capex) “to get that stuff back in shape.” Customers want a fleet that’s ready to go.

“The attrition level across the industry is far greater” equipment-wise, than anyone realizes, Patterson said. “There’s a lot of horsepower that will never come back to work because we chewed through it, or replacement components…We’re using up that stuff as an industry, and a lot of that horsepower was at the end of its useful life when we stacked it at the end of ’14 and through ’15 anyway.”

Obviously, it’s going to take better pricing for customers to ramp up their exploration and production (E&P) activity.

Once the recovery begins, OFS rates should rise quickly because equipment should be in short supply, Patterson said.

“It will take improved pricing to unstack any idle equipment. This is why we’re working hard to retain market share, retain key employees, keep our equipment in great shape. We expect to be in a very opportunistic position as activity levels rise.”

The “good news is, we started to see an improvement in production-related activity in late March, which has continued in April. This increase has been seen mainly in our well servicing and fluid servicing segments. It seems today’s prices have at least offered the possibility of financial returns that justify some maintenance activity.

“We still believe there is a large inventory of deferred maintenance workover projects in all of our markets that should come back quickly if commodity prices continue to stabilize.”

A large portion of Basic’s fleet is dedicated to ongoing production businesses, Patterson said. “This allows us to stay steadily busy when customers stop spending money at the drillbit and on frack work. These improvements in utilization should flow quickly to the bottom line as we have substantially lowered our fixed costs.”

For now, preserving liquidity continues to be the highest priority. It spent about $6 million on capex in the first quarter; half of that amount was for rollover projects from the fourth quarter. Basic had budgeted $40 million for capex this year, but management now expects to spend ‘well below’ that amount.

To that end, field level costs have continued to decline, ‘and we have reduced headcount by approximately 40%,” since the peak in early 2014, Patterson told analysts. Basic had employed close to 4,000 people across the United States before oil prices plunged. More than 200 more people were laid off during 1Q2016.

Assuming more improvements in utilization by customers and not including interest expense payments, Basic expects to be cash flow breakeven by the end of the year, Patterson said. The company also is evaluating “all options available for delevering, including strategic combinations and debt restructuring. While there is no new update on this front, it is a top priority in our list of financial objectives.”

Looking forward at the second quarter, Basic is expecting oil prices “to remain choppy, but we also expect some improvements in our utilization levels. Better weather, longer daylight hours should contribute to this result.”

With cost cutting initiatives kicking in, management expects to “obtain our cash goals by year-end,” the CEO said. “I’m not forecasting the recovery or when it occurs or at what price. Obviously, lower service costs present better financial returns for our customers in a lower commodity price environment. So, oil shouldn’t have to get to $60/bbl before we see some improvements in activity. “

The “gating item,” he said, is going to be the labor pool.

“The longer our industry stays in this present condition, the longer it will take service providers to respond to any increased demand because of the experienced personnel our industry has lost. In addition, activity levels won’t react until confidence, and more importantly credit, return to the E&P space. It appears the second half of 2016 is the soonest we could see this type of shift.” 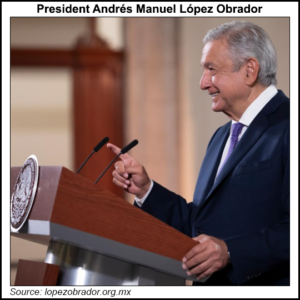 Mexico president Andrés Manuel López Obrador said Monday he is considering amending the constitution to rein in the “neoliberal” 2013-2014 constitutional energy reform of his predecessor, Enrique Peña Nieto. During his daily morning press briefing, López Obrador said a possible counter-reform would reaffirm the state’s predominance in the energy sector, and put a stop to…