Concern about crude oil rail accidents has drawn the attention of regulators and the public, but more Bakken Shale crude oil today is, for the first time, being transported into California via barge, according to the California Energy Commission (CEC). 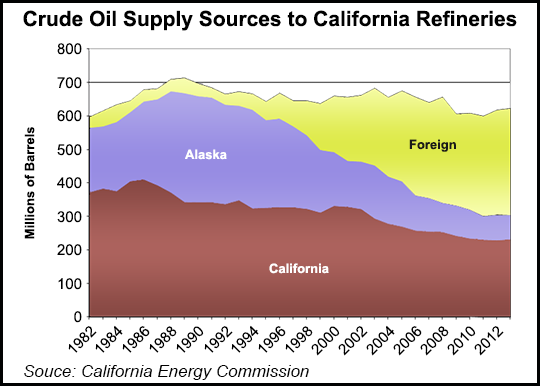 “Marine volumes exceeding rail shipments is not a new development,” a CEC spokesperson told NGI‘s Shale Daily. “The point is that while crude-by-rail is increasing, it still remains only a fraction of the total transport.”

California had almost no crude-by-rail shipments three years ago, but increasing volumes have found their way into the state from oil barge operations centered in the Pacific Northwest, and there are plans for increased capacity (see Shale Daily, April 25, 2013).

A Tesoro Corp. spokeswoman said she could not provide any specific details on crude volumes or shipment plans but confirmed that the refiner plans to receive more North American crude oil at a proposed Plains Bakersfield, CA, unloading facility once it is operational.

CEC officials think California also might see increased marine imports of Bakken crude if an oil rail/marine project in Vancouver, WA, is approved. Last year, the Port of Vancouver, WA, board of commissioners approved a 10-year lease with units of Tesoro and Savage Cos. for a terminal (see Shale Daily, July 26, 2013).

It is too soon to know the relative volumes between marine and rail transport of North Dakota oil coming into California, CEC said. “The changing relative prices of crude oil and logistics costs — marine and rail — ultimately will determine what mix of the two will be greater over the next couple of years,” the spokesperson said.

The Western States Petroleum Association is unaware of the barge traffic statistics on Bakken crude coming into California. “We don’t have any data and I’m not aware of any public dataset that would track that,” said spokesman Tupper Hull.

State officials in the Office of Oil Spill Prevention have said waterborne oil transportation does not pose the same risks of explosive accidents that rail shipments do, but the environmental impacts from a barge spill could be much greater.

Environmentalists concerned about oil/gas development would like to curtail both forms of transportation.

While a series of crude rail accidents last year piqued the attention of regulators, the industry and the general public, the subsequent rail transportation focus in places like California has obscured the reality that barge shipments carry more Bakken crude oil into the state than rail tank cars do. Marine shipments for overall oil imports into the state have always exceeded rail, but this is the first time a majority of specific Bakken shipments have arrived by barge, according to officials in the CEC.

Increasing supplies of crude from the Bakken Shale would diversify the supply picture for California refiners, which have increasingly been relying on foreign oil for their feedstock. During 2013, foreign imports accounted for 51.24% of supplies to California refiners. Most of that supply used to be sourced from Alaska and California itself, but imports from Alaska have been steadily declining since 1991, when they accounted for 46.3% of total imports; that figure has since fallen to 11.8% in 2013.