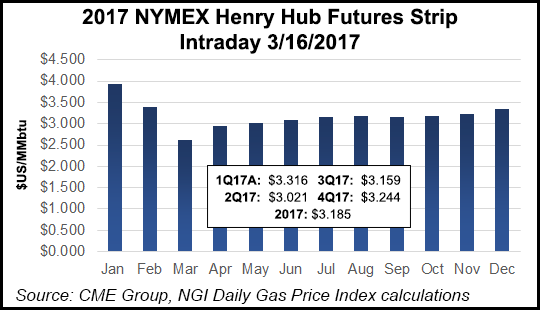 With the second warmest winter on record, 9% warmer than expected, gas demand didn’t materialize, said analyst Nicholas Potter. Barclays’ bullish gas price expectations for 2017 have been pushed into next year.

“There is an upside scenario for 2017 gas prices, but fundamentals alone will not get us there,” he said in a note on Thursday. “Instead, a bull run would depend largely on a hot summer, which is outside anyone but Mother Nature’s control.”

Barclays updated price is nearly equal to a revised forecast by the Energy Information Administration earlier this month, which reduced its spot price to $3.03/MMBtu, 12% lower than the February outlook.

Before the 2016-2017 winter season began, Barclays analysts had seen the potential for a bullish gas story lasting as long as 18 months. However, the lack of cold weather has brought the market “dangerously close to the production increase that will likely arrive by the second half of 2018 as Northeast pipelines come online and associated gas production ramps up.” Barclays is expecting U.S. gas production to increase 5.2 Bcf/d year/year (y/y) in 2018.

“Needless to say, these overestimations have led to higher price expectations than have actually been realized,” Potter said.

Although storage inventories will be ahead of the five-year average, “they will still be 23% below last year’s levels,” Potter said. “This should help prevent the severe shoulder season weakness seen last year (prices sub $2.00/MMBtu) and generally higher prices y/y.”

The importance of colder versus warmer winters to gas prices cannot be overstated, he said.

Continued price weakness is expected into the second quarter as the market focuses on the high storage inventories. This week’s snowstorm Stella offered support as frigid temperatures in high demand areas helped to boost cash prices. However, as the cold subsides and the market becomes fixated on high storage levels, there likely will be price weakness heading into shoulder season.

Barclays is forecasting 2Q2017 demand to refill storage of about 7.8 Bcf/d, below the five-year average of 10.1 Bcf/d.

The 2Q2017 price forecast of $2.78/MMBtu should result in another 2 Bcf/d of power burn from coal-to-gas switching.

“We think that prices should find a firm floor at $2.50/MMBtu in 2Q2017,” Potter said. “Prices below this level would result in a large incremental step-change higher in coal-to-gas switching, which would not be necessary to balance the market.”

The third quarter will set the tone for the 2017-2018 market, according to Barclays.

“With winter mostly behind us, the next period in which weather uncertainty could cause swings in pricing will be June-September as power burn demand kicks in,” Potter said. Assuming normal summer temperatures, prices this summer are forecast at $3.05/MMBtu, down from a previous expectation of $3.55.