If policies inspired by “Keep it in the Ground” and other anti-fossil fuel movements lead to a ban on energy production from federal lands and waters, the United States would lose billions in royalties and hundreds of thousands of jobs, according to a report by the U.S. Chamber of Commerce’s Institute for 21st Century Energy. 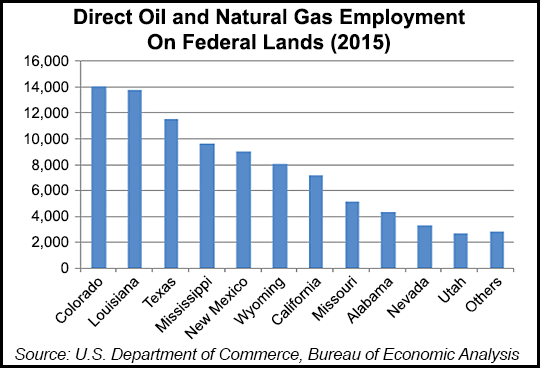 In a 47-page report released Wednesday, analysts said federal and state governments stand to lose more than $11.3 billion in annual royalties if a ban on energy production from federal lands is enacted. Such a ban would also imperil 24% of the nation’s fossil fuel production and 380,300 jobs, about one-third of which are direct jobs (101,600) and the remainder both indirect (75,300) and induced (203,400) jobs. The analysts cited 2015 data from the Interior Department’s Office of Natural Resources Revenue and the Commerce Department’s Bureau of Economic Analysis, respectively.

The report warns that a growing number of politicians, especially Democrats, are coming under the influence of the anti-fossil fuel movement. That includes Democratic presidential nominee Hillary Clinton, who indicated that she supports such a ban during a campaign stop in February. Also worrisome are changes to the Democratic Party platform, many of which were driven by supporters of U.S. Sen. Bernie Sanders and his failed bid for the White House (see Shale Daily, July 11).

“American voters deserve to understand the real world impacts of the proposals that candidates and their allies make,” said Karen Harbert, the institute’s CEO. She said a ban on energy production from federal lands “will have a direct, harmful effect on the American economy, and in particular decimate several states that rely heavily on revenues from federal land production. Given the implications, these policy proposals should not be taken lightly.”

According to the Chamber, its report — “What If Energy Production Was Banned on Federal Lands and Waters?” the first installment of its Energy Accountability Series — was precipitated in part by remarks Clinton made three weeks after the Obama administration suspended coal leasing on federal lands pending a “comprehensive review” (see Daily GPI, Jan. 15). Clinton said a ban on all fossil fuel extraction from federal lands was “a done deal,” citing a report by The Hill.

The report includes two possible scenarios. Under the first, in which a ban is enacted immediately, the aforementioned losses in annual royalties, fossil fuel production and jobs would be realized, as would an estimated $72.3 billion in gross domestic product. The ban would also remove 42% (379 million tons) of coal from the nation’s energy supply mix, which in turn would cause electricity rates to spike because there isn’t enough non-coal capacity in the U.S. to make up for the shortfall.

A second scenario envisioning a ban on future leasing would ultimately lead to similar results, but they would take longer to be realized. The analysts said most of the 4.5 Tcf of natural gas and 719 million bbl of oil currently produced on federal lands would either shift to other states or be replaced by foreign sources. Production on federal lands would decrease by more than 75% over the next 15 years, with annual royalties falling by more than $6 billion. During that period, 268,000 jobs would be lost as well.

Analysts called the prospect for an immediate ban “unlikely” since the coal ban enacted in January only applied to new leases. Still, proposed legislation such as HR 4535, also known as the Keep It in the Ground Act of 2016, is worrisome. HR 4535 is currently under consideration by the House Subcommittee on Energy and Mineral Resources and has 23 cosponsors, all Democrats.

“Taking at face value the statements that continue to be made by various politicians, and incorporating into that analysis the known-positions of interest groups that have assigned a high priority to attacking federal lands resource development, it’s not difficult to imagine a scenario in which a policy that forbids future federal-land development can be adapted to restrict current development as well,” the analysts said.