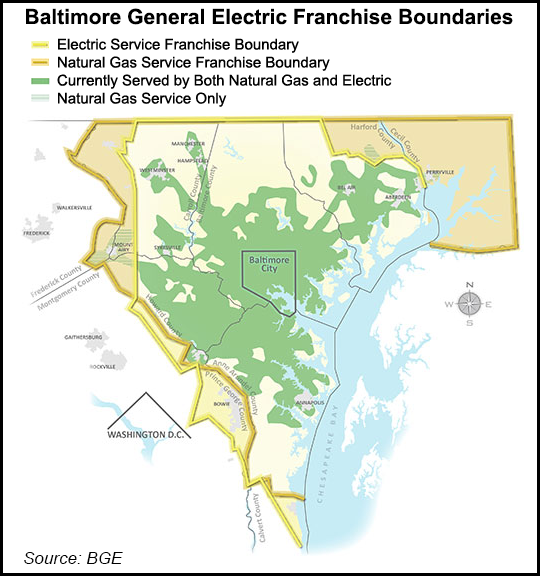 Baltimore Gas & Electric Co. (BGE) had cut off natural gas service to a portion of a northwest neighborhood to investigate a line that exploded Monday, killing two people and injuring seven others.

BGE, a subsidiary of Exelon Corp., said crews had found no leaks and continued to inspect area gas mains and services in the wake of the blast Monday morning on Labyrinth Road, about 10 miles from downtown Baltimore. The utility planned to make repairs if issues were found.

The cause of the explosion is currently unknown, and the company is working with the fire department to investigate. BGE, which offered its prayers, said, “Public safety is our first priority. This remains an active emergency recovery effort led by the Fire Department.”

Management said it was “committed to fully understanding the cause of this incident and will inspect all BGE equipment once rescue efforts are complete. This is an active investigation and we cannot speculate on the possible causes.”

The blast toppled three homes and blew out windows and doors in nearby homes. Some damaged electric lines were repaired.

The utility said the gas infrastructure in the area was installed in the early 1960s, and the most recent inspection was in June and July 2019, when no leaks were identified. In addition, no gas odors were reported prior to the incident, and BGE said it had not received any recent gas odor calls from the block of homes that were damaged.

The Baltimore blast is the latest in a string of incidents that have occurred on other aging infrastructure in recent years across the country. Earlier this year, a section of Texas Eastern Transmission exploded in Kentucky, upstream of another blast that occurred in 2019. In 2018, an explosion on Columbia Gas of Massachusetts killed one man and injured dozens in the Merrimack Valley, near the New Hampshire border. There also have been incidents in recent years that include in California, Colorado, Minneapolis, New York, North Carolina and Pennsylvania, in addition to others.