Spot natural gas prices fell like dominoes during the week’s four-day trading period from Nov. 30-Dec. 3 for December gas delivery amid widespread mild weather that sapped demand. At the end of the trading period, daily gas was trading below $4.00/MMBtu at several locations across the United States, with NGI’s Weekly Spot Gas National Avg. down 86.5 cents to $4.145. 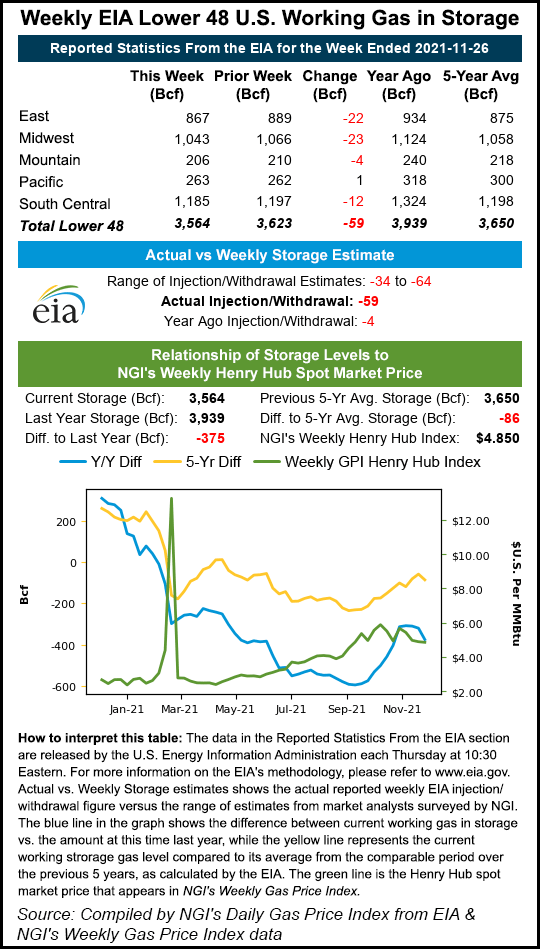 With warmth expected to continue for another couple of weeks — at least — natural gas futures also crumbled. By Friday, the January Nymex gas futures contract had dropped to $4.132, off from the prior Friday’s $5.477 settlement.

Despite the above-normal temperatures blanketing most of the country, there have been pockets of cold. The Northeast, for example, saw overnight lows dip into the 10s to 30s, boosting heating demand for much of the week.

Prices in the region, particularly in New England, soared and even crossed into double-digit territory briefly during the four-day trading period. At PNGTS, spot gas prices hit $12.00 but went on to average $7.900, off 33.5 cents on the week. Algonquin Citygate plunged 99.5 cents week/week to average $6.365. Transco Zone 6 NY prices were off 90.0 cents to average $4.000.

Some chilly weather was set to arrive on the West Coast over the weekend, but late-week gains were not enough to prevent steep weekly losses across the region. Northwest Wyoming Pool tumbled 90.0 cents week/week to average $3.845. PG&E Citygate was down $1.135 to $4.745.

Losses were similarly stout elsewhere across the country. Henry Hub averaged $4.155 for the week, off 69.5 cents. In Texas, cash prices slipped below $4.00.

The persistently mild forecast dashes hopes that colder weather would finally arrive and trimmed projected demand deep into December. Losses along the futures curve came quickly and were substantial from the start of the week. After four days in the red, the January Nymex futures contract had plunged $1.42.

There have been some swings in the weather data, especially in the last few runs. In fact, the overnight data leading up to Friday’s session had indicated that cold air would make its way into the northern United States by the middle of the month. The January contract touched an intraday high of $4.285 on the cooler change. However, a subsequent run of the weather models backtracked on the coming cold snap, trimming gains. The prompt month’s $4.132 settlement on Friday was on the lower end of the roughly 22-cent trading range.

“It is very much worth noting that the model consensus still favors a warm-skewed pattern,” said Bespoke Weather Services.

The stubbornly balmy outlook could drive prices under the $4.00 level in the next week, according to the forecaster. Even with some modest cooler changes, the risk of new days rolling into the back of the forecast that are quite warm would likely continue weighing on the market.

“This is far less of a bold call, however,” now that gas prices have plunged below $4.10, “and there is definitely solid upside risk if the weekend models flip materially colder,” Bespoke said.

Even with most of the winter still ahead, several market analysts have pointed out that the March/April price spread — known as the widowmaker — has collapsed significantly in recent weeks. The spread is an important indicator of how concerned the market is about supply during the winter season.

Even after Friday’s gains, Mobius Risk Group noted that the March/April spread was less than 20 cents. If weather remains warm through the end of the year, the firm said the spread could move towards flat, though there are “material risks of a jarring move on the upside” if weather models begin to depict a more normal pattern.

“Risk premium is all but gone this winter, at least from a spread perspective,” Mobius said. “Underlying prices at sub-$4.00 near the front of the curve should not be seen as a reason to believe winter is over.”

Nevertheless, it’s hard to deny the vast improvement in U.S. supplies over the past couple of months. The near-perfect temperature backdrop has quickly spurred an impressive rebuild in storage inventories that were once at risk of falling short of domestic demand in the coming months.

Broken down by region, inventories fell by 23 Bcf in the Midwest and by 22 Bcf in the East, according to EIA. The South Central region saw stocks slip by 12 Bcf, including an 8 Bcf decline in nonsalt facilities and a 3 Bcf draw in salts.

The Schork Group said a delivery from salt facilities is “abnormal” at this point in the season. Salt inventories dropped to 335 Bcf, and the surplus to the seasonally adjusted trend fell by 317 basis points to a six-week low of 7.8% (24 Bcf.)

Overall, a total of 80 Bcf has been withdrawn from storage in the first two reports of the season,” which is on the high end for this early portion of the season,” The Schork Group said.

However, the continued warmth on the radar is largely seen preventing a deeper drawdown of inventories that is typical for this time of year. Early estimates show inventories at the end of March sitting at around 1.5 Tcf.

Meanwhile, liquefied natural gas (LNG) demand is expected to remain strong throughout the winter, but the dramatic run-up in U.S. prices that materialized over the fall is not likely to occur to the same level. EBW Analytics Group said the tight correlation that existed in September and early October between Nymex futures and Dutch Title Transfer Facility (TTF) natural gas futures has broken down over the past month. The main fundamental linking mechanism was a one-in-20 risk of an extremely cold winter in which natural gas storage would fall to dangerously low levels, according to the firm. This would prompt Nymex gas to converge with global prices in order to make U.S. LNG exports economically unfeasible and preserve natural gas for domestic usage.

Most U.S. cash markets continued to soften on Friday for weekend through Monday delivery, with the stout gains seen in the Northeast on Thursday quickly dissipating despite ongoing chilly weather in the region.

The price discounts occurred as the National Weather Service (NWS) said New England was in store for more cold and blustery northwest winds. In addition, persistent lake effect snow showers are possible through early Sunday, along with a few inches of snowfall likely across the eastern Upper Peninsula of Michigan and the Tug Hill Plateau of New York.

Meanwhile, an upper level disturbance entering the Northwest is set to combine with an Arctic air mass located just north of the U.S.-Canada border to allow for some snowfall to develop over the Northern High Plains early Saturday, according to NWS. Snow is also likely across the far Northern Rockies and the Washington Cascades.

By Sunday, a developing area of low pressure over central Montana is expected to move east with the associated precipitation, leading to a swath of moderate-to-heavy snow from northeast Montana to northern Minnesota.

Elsewhere across the country, sunshine and warmth are set to continue, limiting any need for heating and sending prices lower again. Price decreases in the Southeast and across Louisiana were limited to around 20.0 cents, as were those in the Midcontinent and Midwest. Henry Hub spot gas was down 18.5 cents to $3.855 for the three-day gas period.

However, Wood Mackenzie said as of Dec. 1, inventory levels at Aliso Canyon were at 41.61 Bcf, slightly above the agreed maximum. 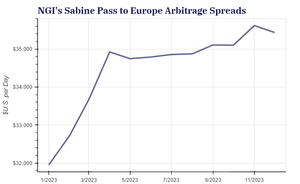