The Ballymore oil and natural gas project in the deepwater Gulf of Mexico (GOM), which would be developed using a three-mile subsea tieback to reduce costs, has gotten a thumb’s up to proceed. 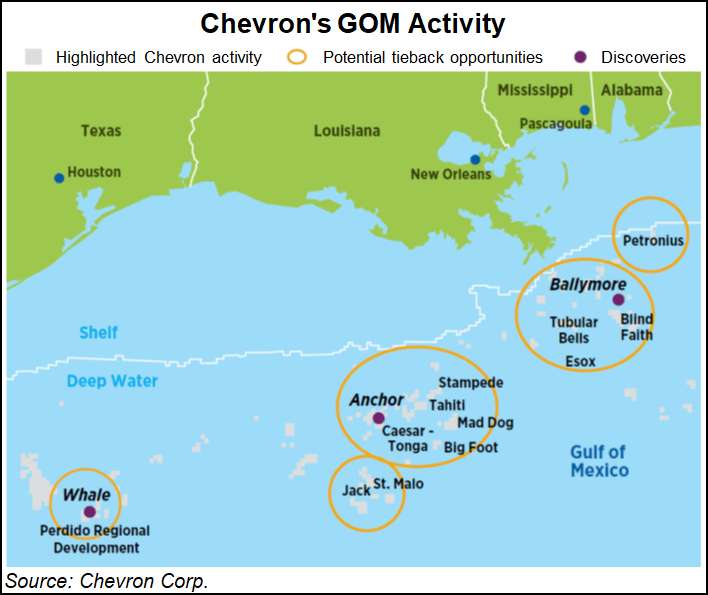 The Mississippi Canyon prospect, with design capacity of 75,000 b/d of crude oil, would be tied back to the Chevron-operated Blind Faith platform. Potentially recoverable resources for Ballymore, held 60% by Chevron U.S.A. Inc. and 40% by TotalEnergies E&P USA Inc., are estimated at more than 150 million boe.

Oil and natural gas production would be transported via existing infrastructure, with first supplies expected in 2025.

“Chevron’s U.S. Gulf of Mexico production is some of the lowest-carbon intensity production in our portfolio,” said President Steve Green of Chevron North America Exploration and Production.

Carbon dioxide equivalent (CO2e) emissions from Ballymore are estimated at around 6 kilograms/boe, “a fraction of the global industry average,” Green said. “Once complete, Ballymore is expected to add a reliable supply of U.S.-produced energy to help meet global demand. The project is designed to lower development costs by using a subsea tieback approach, standardized equipment and repeatable engineering solutions – leveraging existing operated infrastructure.”

The Ballymore project would include three production wells tied back via one flowline to Blind Faith at a cost estimated at $1.6 billion. First announced in 2018, Ballymore is the first Chevron-led development in the Norphlet trend. The project would be in around 6,600 feet of water, close to 160 miles southeast of New Orleans.

“Sanctioning the Ballymore field development, only four years after the discovery, is the result of our exploration efforts in the Gulf of Mexico,” said TotalEnergies E&P’s David Mendelson, senior vice president Americas. “Thanks to its tieback development concept, this decision fits TotalEnergies’ strategy of focusing on oil projects with low breakeven and low emissions.”

In a note Wednesday, Tudor, Pickering, Holt & Co. said “in terms of emissions intensity…the project ranks well across projects across the upstream industry. With the sanction, the outlook for volumes in the GOM continues to trend higher in 2024-plus, with further deployment of seismic and deeper drilling technologies potentially opening up further development of tiebacks and new hub-scale projects in the coming years.”

San Ramon, CA-based Chevron is one of the leading leaseholders in the GOM’s deepwater. In 2020, Chevron’s GOM output averaged 175,000 b/d of crude oil, 96 MMcf/d of natural gas and 11,000 b/d of natural gas liquids. The output primarily is from deepwater prospects in the Jack/St. Malo and Tahiti fields; the Perdido Regional Development; and the Caesar/Tonga, Big Foot, Tubular Bells, Blind Faith and Mad Dog fields.