Recovering production volumes and weaker demand amid the transition to spring helped pressure natural gas futures lower Wednesday as the front month continued to bounce around a tight trading range. 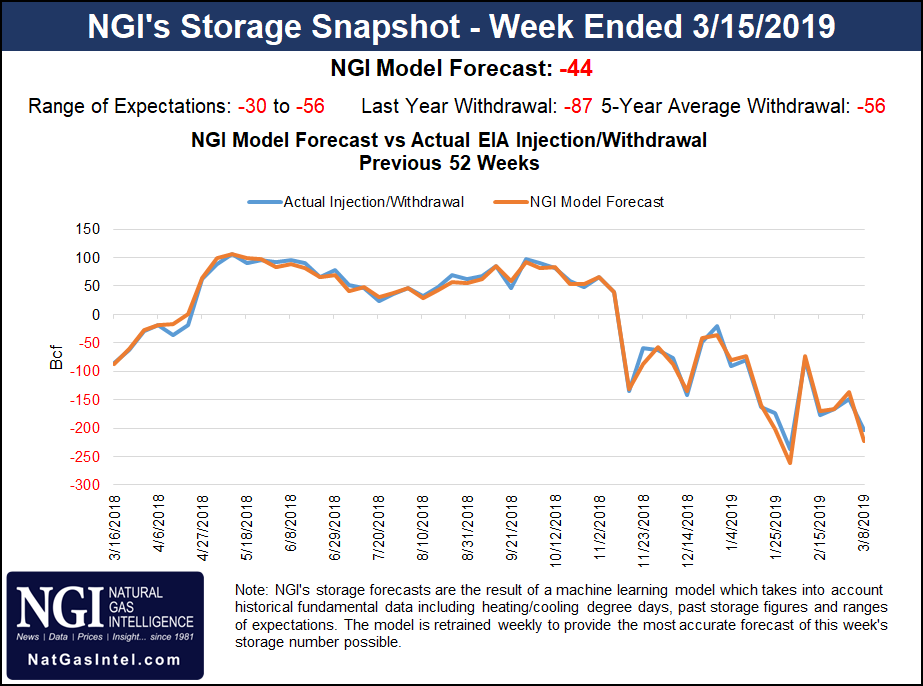 In the spot market, the prospect of snow in the Northeast by the weekend failed to produce much of a price response; the NGI Spot Gas National Avg. gave up 8.0 cents to $2.530/MMBtu.

“Loosening demand finally became apparent in natural gas prices today, as after weather saved prices,” with major gas-weighted degree day additions in the last few days, “we came in to see weaker cash prices pull down the front of the curve,” Bespoke said.

The forecaster pointed to slightly lower demand from liquefied natural gas exports, elevated production and weather-adjusted power burns that it said are “quite loose.”

“This is not the high-end cold that we saw last year, but could provide enough demand to keep a temporary floor for prices a bit higher despite what are clear loosening balances,” Bespoke said. “The result is that in the short-term we do not see much more downside for the April contract heading into expiry, especially as the storage deficit indicates risk for a strong expiry, and short-term weather next week will be supportive.”

Estimates ahead of Thursday’s Energy Information Administration (EIA) storage report were pointing to a lighter-than-average withdrawal. A Reuters survey showed participants expecting EIA to report a 48 Bcf withdrawal for the week ended March 15, with estimates ranging from a pull of 30 Bcf up to a 56 Bcf. As of Wednesday afternoon, a Bloomberg survey showed a median estimate for a 50 Bcf pull, with responses ranging from minus 42 Bcf to minus 56 Bcf. NGI’s storage model predicted a 44 Bcf withdrawal.

Last year, EIA recorded an 87 Bcf withdrawal from U.S. gas stocks for the period, and the five-year average is a withdrawal of 56 Bcf.

Looking at the supply picture, daily production has been showing signs of recovering from recent freeze-offs, but Lower 48 output as of Wednesday had yet to bounce back above the 86 Bcf/d mark, according to Genscape Inc. The firm’s daily pipe flow production estimate showed Lower 48 volumes at 85.13 Bcf/d for Wednesday, while Monday’s estimate of 85.72 Bcf/d marked the highest production level in over a week and was more than 1.34 Bcf/d above the monthly low recorded last week.

“During the winter, we run a daily freeze-off analysis, which currently shows about 660 MMcf/d of production restricted by freeze-offs, a notable improvement from last week when there was as much as 1.36 Bcf/d of production choked back,” Genscape senior natural gas analyst Rick Margolin said.

“This winter is on pace to be the second largest winter in the past six for cumulative freeze-offs. This winter’s cumulative total of 74.76 Bcf in freeze-offs trails only the 2014/15 winter, which posted 99.01 Bcf of cumulative impacts.”

“The most notable weather systems will impact the Northeast Thursday into Friday with heavy rain in the warm sector and snow showers behind the cold front,” NatGasWeather said. “After a mild break this weekend over the Great Lakes and Northeast, a colder trending weather system will sweep through Tuesday and Wednesday with lows in the teens to 30s, and where quite a bit of demand was added the past couple days.

Even as forecasts warned of snowfall in the Northeast by the end of the week, prices mostly weakened along the East Coast Wednesday.

The National Weather Service on Wednesday was monitoring a “developing coastal low pressure system off the Carolina coasts” that was expected to track up the East Coast through the end of this week. “Moderate to locally heavy rainfall is likely across the Mid-Atlantic states on Thursday, shifting northward into the Northeast by early Friday.

“The potential for accumulating snowfall exists across portions of the interior Northeast and northern New England through the start of this weekend.”

“Tetco will conduct in-line inspection tool runs from Bernville, PA, to Lambertville, NJ, on the 30-inch diameter Penn-Jersey Line 19 in M3, with various phases tentatively scheduled through July 13,” Garcia said. “Cleaner runs will be performed from Thursday through Saturday (March 21-23), which will limit capacity through the Bechtelsville, PA, compressor station by 339 MMcf/d to 2,627 MMcf/d,” Garcia told clients Wednesday. “Flows have averaged 2,358 MMcf/d over the last 30 days and maxed at around 3,000 MMcf/d over the same time period.

“Bechtelsville flows dropped significantly last week due to abnormally warm weather in the Northeast, but have rebounded to around 2,000 MMcf/d since weather has returned to normal seasonal ranges.”

The maintenance event is unlikely to have a major impact, but it could potentially put bullish pressure on spot prices at Tetco M3, given forecasts for colder-than-normal temperatures in the region this weekend, according to Garcia.

Across the country in California, PG&E CItygate and SoCal Citygate continued to trade at elevated levels Wednesday, especially SoCal, which added 25.0 cents to $4.200.

A cold front moving into California Wednesday and through the Southwest by Thursday was expected to “bring increased chances of rain and mountain snows to California, the Central Great Basin and into the Southwest/Four Corners region,” according to the NWS.

Basis improved slightly at some locations, including Waha, which added 11.0 cents to average 25.5 cents on the day. But the location saw individual trades veer into negative territory for the third straight day, a trend that augurs poorly for pricing conditions in the play heading into the shoulder months.

In Canada, NOVA/AECO C tumbled C94.0 cents to C$1.210 Wednesday, while Westcoast Station 2 gave up C50.5 cents to average C68.0 cents. The declines coincided with forecasts for above-normal temperatures in Western Canada and the Pacific Northwest, as well as a constraint impacting production in British Columbia (BC).

An Alliance Pipeline force majeure related to compressor issues at the Blueberry Hill station was expected to cut production out of BC by at least 140 MMcf/d effective Wednesday, according to Genscape analyst Matthew McDowell.

Starting Wednesday morning and estimated to last 30 hours, “the repair work is expected to curtail nominations to a number of receipt points, the total impact of which is unclear due to the reporting nature of the pipeline,” McDowell said.

An interconnect between Alliance and Westcoast that reports production volumes from the McMahon processing plant showed a drop to zero for Wednesday’s gas day, 140 MMcf/d below flows over the past 30 days, he said.

“Nominations through Alliance’s Zone 1 dropped 75 MMcf/d Tuesday ahead of the event, but flows through Zone 2 towards the U.S. border do not seem affected,” McDowell said.