North Dakota officials estimate that 25% of the Bakken Shale’s output could be negatively impacted by a change in energy policy under President-elect Joseph R. Biden Jr., threatening the 7,000 state-drawn, two-square-mile spacing units that contain all of the state’s future drilling sites. 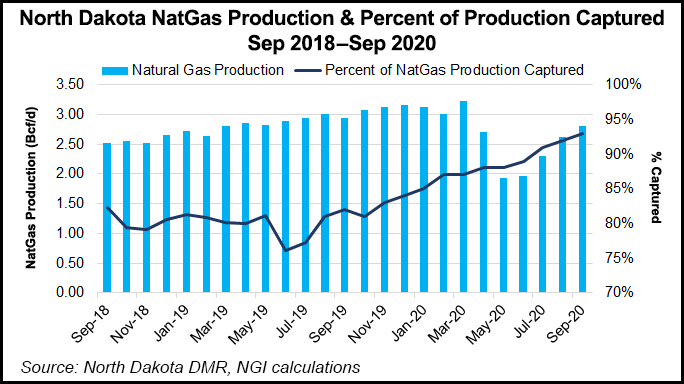 Nearly half (48%) of those units include federal-owned land and/or mineral rights, said Lynn Helms, director of the state Department of Mineral Resources. Helms’ department, through its oil and gas division, decides how many drilling sites are allowed within each unit and establishes setbacks so one driller doesn’t “drain a neighbor’s oil.”

“Spacing units are set up to keep wells away from boundaries and away from neighboring oil, so everyone’s rights are protected,” said Helms. He added that two-mile-long well laterals are the most common, and for all the spacing units to be developed, oil prices need to be $55/bbl or higher.

At current prices, the best outcome would be holding state production steady at 1.2 million b/d. Prices need to get “above $45/bbl for completion of drilled-but-uncompleted (DUC) wells, and we need to see $55/bbl oil in general to drill new wells and complete them,” Helms said.

“The recent surge in the coronavirus pandemic has taken a lot of excitement out of oil prices and oil demand recovery,” he added. Furthermore, the change in U.S. leadership isn’t expected to have a big impact on energy demand as it may take up to 18 months for demand to begin to come back.

“However, the policies they are talking about could move prices up more quickly,” Helms said, adding that if Gulf of Mexico offshore drilling and the Arctic National Wildlife Refuge in Alaska are off the table, along with 25% of North Dakota’s spacing units, then there are few reserves that could be brought on quickly.

Federal drilling permits cost $10,000 each and have a two-year life, so operators collecting them can wait until well into 2022 to use them, according to Helms, who noted that North Dakota had 74 permits approved in October. “Operators are trying to build inventories of those two-year permits.”

The majority of Bakken/Three Forks crude supplies continues to be shipped to the Cushing Hub in Oklahoma or the Gulf Coast. “And with production levels expected to stay where they are, there is plenty of pipeline capacity available,” said Justin Kringstad, director of the North Dakota Pipeline Authority (NDPA).

Gas flaring has come down steadily since 2019 because of continued investment in gathering pipelines and related infrastructure, and there are four major projects for additional processing and gathering still in development, Kringstad said. “The industry is not slowing down, and I can assure you that the midstream companies want to take advantage of this time to get ahead of future production growth.”

Another positive sign is that new wells are on par with existing wells in terms of gas volumes, according to Kringstad. Pricing is a different story, though, and the U.S. Energy Information Administration projects that $55/bbl won’t be seen again until at least the mid-2020s.

As the NDPA follows the New York Mercantile Exchange and other pricing month to month, “we continue to see the curve flatten, challenging when operators are going to be looking at new projects and when activity levels will pick up,” Kringstad said. “Given the pandemic drawing out and some of the fundamental shifts of operators, we appear to be in a situation of ‘lower-for-longer’ [in terms of prices and drilling].”

The exception may be in the midstream sector, where Kringstad said companies are well positioned to keep pace with oilfield needs. “Infrastructure we have today is not adequate for the long term, so we are monitoring what the timing and scale is for additional projects.”