North Dakota’s top oil/natural gas regulator said Monday there are some positive outcomes from the two-year price slump that continues to confound the industry, while also recognizing that a good deal of hurt has been spread across the Bakken and other major shale plays. 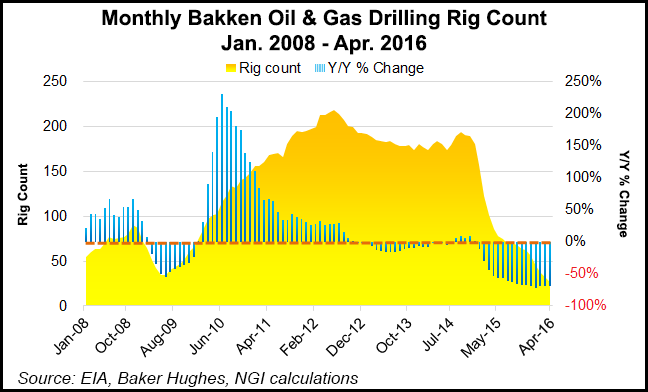 From the state’s standpoint, the drilling slowdown has allowed gathering and processing infrastructure to catch up in the Bakken, while from the producers’ standpoint, new efficiencies have been developed, said Lynn Helms, director of the North Dakota Department of Mineral Resources.

The price crash, which has taken the Bakken rig count from 186 in late 2014 to 25 last Friday (see Shale Daily, May 20), cut drastically the completion of new wells and focused the limited remaining drilling in a relatively small core area of the Bakken, Helms told NGI‘s Shale Daily. But the narrower focus hasn’t been all bad.

“The gathering and processing folks have been able to focus their crews on a smaller area and that’s been helpful,” Helms said. It is easier and more economic to concentrate on 2-3,000 square miles, compared to the full 15,000-square-mile Bakken/Three Forks plays, he said.

“It is an almost impossible task to focus on 15,000 square miles, but if you can reduce it to a few thousand square miles, it becomes doable.”

From the industry’s standpoint, the good news amid the downturn and its negative fallout has been the ability to develop what Helms thinks are significant and long-lasting efficiencies. “The companies that survive and take advantage of the upside when prices start to go back up will be smaller, faster and stronger,” Helms said.

As an outgrowth of the efficiency gains, Helms said that break-even prices in the Bakken — formerly a high-priced play — have “dropped dramatically” and they are likely to stay low. “Often these efficiency gains are overcome by optimism, but most of the new efficiencies in this case will become permanent,” he said.

“We now know that drilling rigs are now capable of two wells per month, and that will hold; likewise, now operators have learned how to get better hydraulic fracturing [fracking] results. The frack jobs haven’t gotten smaller, in fact, they have gotten much larger, but they have gotten cheaper.”

Helms doesn’t see the lingering low price environment fully rebounding much before mid-2017 at the earliest.

There are also lessons in how to make better use of horsepower with different water and proppant mixes. “The other thing that people have discovered is that the Bakken with the new efficiencies declines slower than other shale plays.

“One of the surprising things to hear from operators is the core area of the Bakken has a lower decline rate than other major shale plays,” Helms said. “So some of the things that [operators] learned in the process of surviving and cutting costs have actually made the wells better.”

That is why producers are touting the Bakken at above $60/bbl as the best place to invest, he said. “So the things that are going to stick include joint efficiencies, new knowledge about how to frack these wells, and the fact they have been able to reduce the decline rate.”