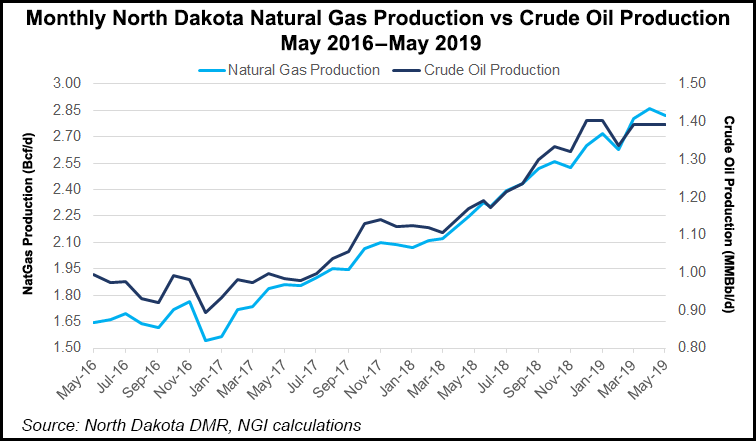 NDPA Director Justin Kringstad told NGI’s Shale Daily that the proposed expansion of the Dakota Access Pipeline (DAPL) and the greenfield Liberty Pipeline each have the commercial support to get built. “They are both actively working through the regulatory process,” he said.

Kringstad said 2021 is the target in-service date for both projects, assuming all regulatory approvals are obtained. DAPL’s expansion schedule has not been made public, so “it is very difficult to say if the industry would experience any temporary excess pipeline capacity in the coming years.”

DAPL contemplates pushing current 570,000 b/d capacity to 1.1 million b/d. The Liberty project, backed by Phillips 66 and Bridger Pipeline LLC, would stretch from the Rockies and Bakken to the Cushing hub in Oklahoma, enabling supply to move south. The system could have a capacity of up to 350,000 b/d, with most reserved for Bakken crude volumes.

In the Energy Information Administration’s latest Drilling Productivity Report issued on Monday, the Bakken expects oil production in September to reach 1.44 million b/d from 1.43 million b/d this month. The state’s natural gas production is expected to increase slightly to 2.95 Bcf/d from 2.94 Bcf/d.

Bakken oil transport now leans heavily on pipelines and rail cars, with trucking and exports to Canada also factoring into the mix. Crude pipeline shipments averaged 900,000 b/d last year and have hit 1 million b/d this year, with capacity reaching up to 1.3 million b/d more recently, according to ClearView’s analysis, which used NDPA data.

Associated gas production also is growing at twice the rate of crude oil, with flaring climbing to nearly 20% in the play. ClearView said North Dakota “on the surface” appears to have adequate gas transport capacity this year.