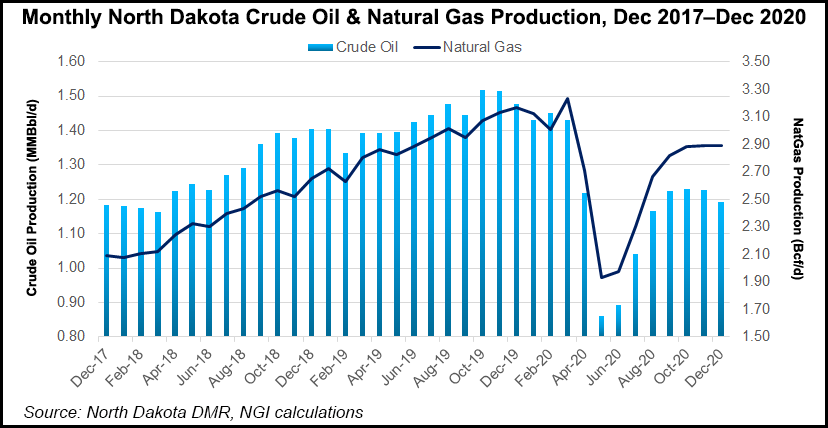 “The drilling rig count [15 as of last Friday] is substantially short of what we need to maintain production [at 1.2 million b/d] off of drilling and completions,” said Lynn Helms, director of the state Department of Mineral Resources. “We really need to have 30 to 35 drilling rigs to be putting out 70 completed wells monthly.

“We are hearing positive things about drilling, and with oil prices where they are today, we may begin to see increases in drilling sooner than we had expected, maybe by the end of this year if these prices hold, depending on what the Organization of Petroleum Exporting Countries (OPEC) does and other factors,” Helms added.

OPEC reportedly wants to maintain prices at WTI from $45 to $55/bbl, and the current price is around $60/bbl, so Helms said it is uncertain whether the global spigot will continue to be choked back when OPEC meets again in March. “Stay tuned,” he said. “Global demand is coming back on a very uneven basis.”

With wind storms and sub-freezing temperatures, Helms predicted the drop in oil production for January and February would “double” that of December when those final statistics come in during March and April.

Even with the increased gas production, gas capture reached a new high point in December at 94%, and for the first time in years all sectors of the Williston Basin met the state’s current goal of 91%. “I can’t recall the time when the entire state was in compliance,” Helms said. “There are no operators who are going to have their production restricted for noncompliance.”

In addition, added processing is coming since Hess Corp. announced it was going to move forward with its $150 million, 400 MMcf/d Tioga gas processing plant expansion this year, Helms said. “They didn’t give us an exact date, but it will be sometime in the second half of this year,” he said.

Pipeline Authority Director Justin Kringstad called December’s gas capture “a phenomenal story about the success we have seen in the investments in gas capture infrastructure,” including processing plants, compressors and new pipe in the ground. He did not recall if the state ever had flaring down to the 6% level.