North Dakota oil prices and production are expected to stay down for the rest of this year as producers reallocate resources to other places, such as the Permian Basin in Texas and Oklahoma’ SCOOP (South Central Oklahoma Oil Province) and STACK (Sooner Trend of the Anadarko Basin, mostly Canadian and Kingfisher counties), according to Lynn Helms, director of the state’s Department of Mineral Resources. 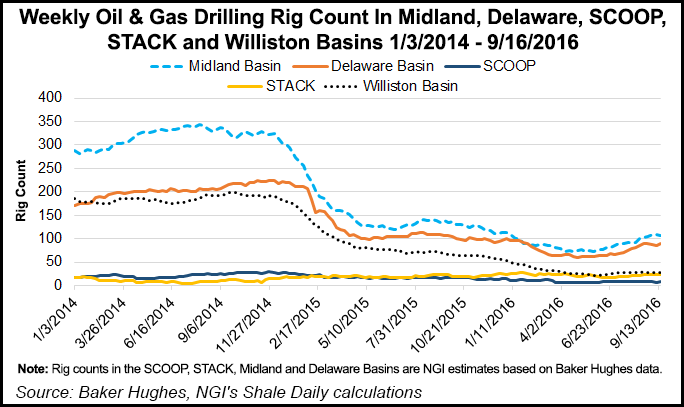 During a webinar Friday giving statistics on the Bakken from July, Helms reiterated his prediction that production of Bakken crude will dip below 1 million b/d before the end of this year, an unwelcome milestone he thinks carries “psychological” implications. At the same time, he cited several major Bakken producers that are diverting investments elsewhere.

“We’re seeing [Bakken] producers making deals in other basins where price points are lower,” Helms said. “EOG just purchased Yates Petroleum [see Shale Daily, Sept. 6], which gives it an enormous position in the Permian, and earlier we saw Continental Resources shift gathering expenditures to the STACK in Oklahoma. What we’re seeing is capital reallocated, particularly to the Permian and Oklahoma where the [breakeven] price points are way lower.”

While there were earlier indicators of $50/bbl oil becoming a fixture in the third quarter and rigs and hydraulic fracturing (fracking) crews continuing to increase (see Shale Daily, Sept. 16), the $50 price point won’t be reached anytime soon and operators have indicated they will be cutting rigs and fracking crews, Helms said.

Helms said North Dakota is only one or two months away from dipping under the 1 million b/d production level, and the state’s revenue forecast for next year is built around production levels at the 900,000 b/d level — not the one million b/d. “I think that is clearly the direction we are headed,” he said.

Adequate oil supplies through next year are already in place, Helms said, and that will have an impact on operations in North Dakota.

“There is enough value in the oil to sustain current production through workover wells and putting broken wells back on production,” Helms said. “But there is not enough value to add more frack crews or mobilize more drilling rigs, and it looks like current employment levels are adequate to keep this price level [under $50/bbl] for oil in place through the end of this year.”

The one area where the flat prices are not dampening infrastructure growth is in gathering — gas, oil and water — according to Helms, who met recently with the major Bakken gathering companies. “All of them indicated that it is business as usual in their world,” he said. “I think we are still going to have a very good year in terms of gas processing plants, gas gathering infrastructure, and that sort of thing — all focused in the [four- or five-county] core area.”