A Bakken Shale natural gas pipeline project is expected to increase North Dakota’s efforts to raise production and reduce flaring, according to the director of the state’s Pipeline Authority. 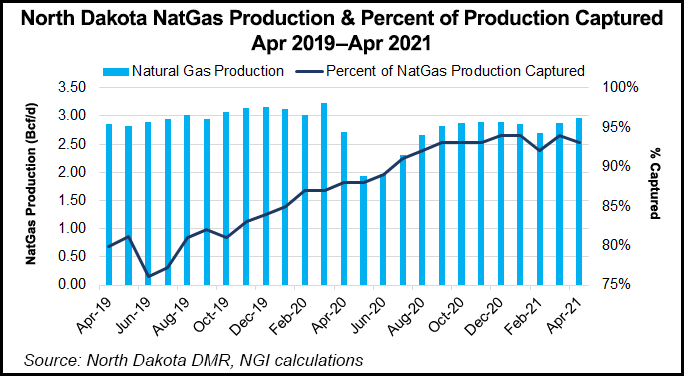 MDU Resources Group Inc.’s pipeline unit, WBI Energy Inc. earlier this month received approval for an expansion project to build the North Bakken pipeline. Construction should start in the next few weeks, and the lines would be in service by year’s end, said Pipeline Authority director Justin Kringstad.

“This system frees up the ability for more drilling and associated oil and gas production north of Lake Sakakawea, an area that is particularly congested and physically out of interstate gas pipeline capacity today,” he noted. It is a choke point for any additional gas capture.

Once online, the system “will free up the area for additional gas capture investment and more residue gas takeaway,” Kringstad said. “If a new gas transmission project was not developed, the region north of the lake would continue to see depressed activity levels since the gas capture infrastructure is not available to meet the flaring guidelines.”

By 2023, more investments are likely to be needed to meet the state’s gas capture goals, said North Dakota’s Lynn Helms, who directs the Department of Mineral Resources. “Before, we thought there would be smooth sailing until 2025, but that’s not our expectation anymore.”

Kringstad said gas capture will continue to be a challenge. “We need to make sure connected wells have adequate capacity all the way from the wellhead to the processing plant,” he said. “It is going to be a continual challenge to stay on top of the gathering systems, making sure compression is adequate, and the pigging operations to clean liquids is timed appropriately.”

“Going forward, I expect eastern Montana to see a small number of drilling rigs added over the next 18 months, but most Bakken activity will stay concentrated in the larger and more productive areas of North Dakota for the foreseeable future,” said Kringstad.