Bakken Shale oil producers will likely limit annual production growth to 1-2% over the next 10 years, driven largely by concerns about natural gas capture, according to North Dakota’s top oil and gas regulator. 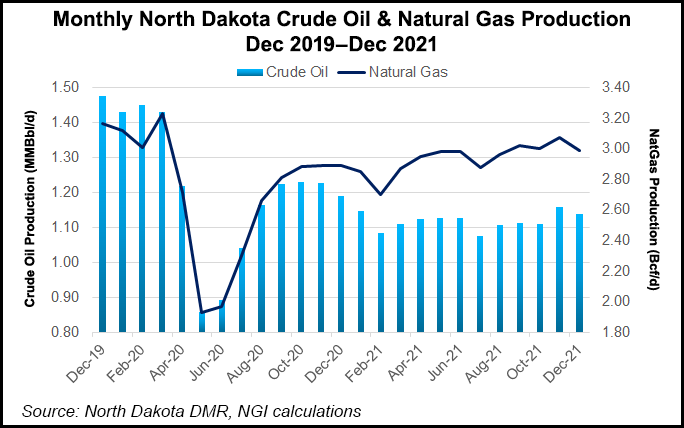 Department of Mineral Resources director Lynn Helms discussed the outlook, along with the state’s latest production and drilling statistics, with reporters on Monday. Helms said he met earlier this month with top executives from 10 of the state’s top operators during the NAPE Summit in Houston.

The main takeaway was that “the Bakken has been rebranded, whether we wanted it to be or not, as mature,” Helms said.

Growth opportunities now are considered to be in the Permian Basin of West Texas and southeastern New Mexico, Helms said. The Bakken and Eagle Ford shales, meanwhile, “are considered mature, so we’re looking at very low rates of growth,” with some operators planning to hold production flat.

He said concerns about natural gas flaring have “an enormous amount” to do with the plans to limit growth in the Bakken, as most large producers now are targeting gas capture percentages in the high 90s.

“And so that does reduce growth rate for certain,” Helms said. Only a few years ago, the same operators were seeking exemptions to flaring regulations so they could grow production.

“In four short years, that has made a complete 180 to where keeping their gas capture in the upper 90s is rule No. 1 and if production growth can happen within that paradigm, fine,” Helms said.

He noted that gas production in the Bakken is almost certain to keep growing, even if oil output stays flat, as operators continue innovating on ways to improve gas capture.

For example, when gas takeaway capacity is constrained, operators now are choking back wells and shutting in production rather than flaring off excess gas, he noted.

In terms of reducing routine flaring, Helms said there is a “huge focus on finding a way to capture tank vapors…lots of work on redesigning production facilities and installing new technology to capture those tank vapors.”

The Bakken’s rebranding as mature is hardly bad news for companies operating there, though, according to the regulatory chief.

The mighty shale formation in the Williston Basin “has become a real cash cow,” he said. “I heard that term several times” at the NAPE event. “The Bakken has very good economics and every well that they generate or produce here produces a lot of cash and a lot of revenue.

“So those are positives, but they’re not reinvesting all of that revenue back in as” capital expenditure, Helms explained.

As operators scale back drilling capital in the Bakken over the coming years, there is likely to be more focus on enhanced oil recovery from mature wells, Helms said.

Most of the company executives that Helms said he spoke with had about 10-15 years of drilling inventory left in their Bakken acreage. In some cases, it was as little as five years.

He also noted the ongoing labor shortage affecting operations in the Bakken, with fracturing (fracking) crews and truck drivers – namely those who haul frack sand and water – in short supply.

The state’s rig count “fell 40% from January 2020 to December 2021, but is slowly increasing,” Helms said. The number of well completions “has been low and volatile” since the second quarter of 2020, “as the number of active completion crews dropped from 25 to one then increased to 10 this week.”

The North Dakota Light Sweet crude oil price stood at $87.50/bbl as of Monday, versus $93.10 for West Texas Intermediate.