Continental Resources Inc. announced Wednesday that its proved reserves have nearly doubled, driven primarily by strong production growth in North Dakota and Montana’s portions of the Bakken Shale, and part from a legacy play in south-central Oklahoma. 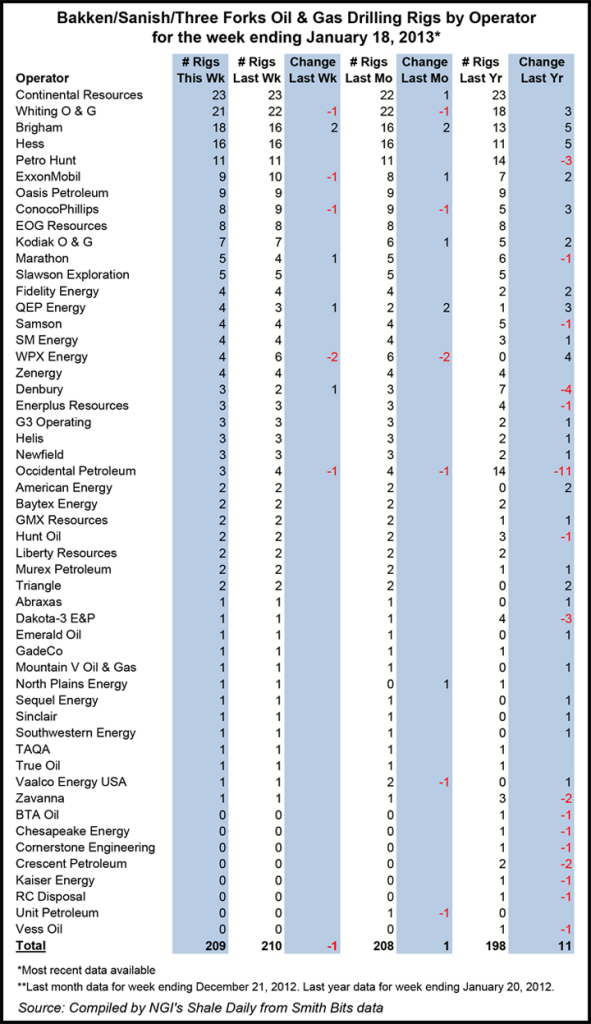 Oklahoma City-based Continental said its year-end proved reserves for 2012 totaled 785 MMboe, a year/year (y/y) increase of 54% over 2011. With the increase, the company’s proved reserves have achieved a compound annual growth rate of 45% since the end of 2009.

Continental said its proved reserves were now valued at a PV-10 (present value of net estimated future revenues, discounted at an annual discount rate of 10%) of $13.3 billion, a 45% increase over the PV-10 of $9.2 billion for its proved reserves at the end of 2011.

“The higher percentage of crude oil proved reserves in 2012 was accomplished despite two crude oil concentrated divestitures,” the company said. Both of those deals were concluded late in the year with undisclosed buyers (see Shale Daily, Dec. 21, 2012; Nov. 12, 2012).

“We continue to increase our concentration in high-value, high-growth, crude oil assets, especially in the Bakken,” said CEO Harold Hamm. “We are growing the value of our Bakken assets through strategic acquisitions, exploration, and the expanded use of pad drilling, which should improve efficiencies and translate into even better rates of return.”

“We have more than adequate pipe and rail capacity out of the basin at this time, so we can move our production to the most advantageous markets,” Hamm said. “Realizing the Bakken’s full potential is essential to our five-year plan to triple production and proved reserves by year-end 2017, while increasing operating margins.”

But the company’s surge in proved reserves wasn’t a Bakken-only story. Continental said it had accelerated production in the South Central Oklahoma Oil Province — an area dubbed “SCOOP” by company executives — an oil and liquids-rich play in the Woodford Shale, in the Anadarko Basin (see Shale Daily, Oct. 11, 2012; Oct. 10, 2012). Continental said proved reserves from SCOOP were 63 MMboe with a PV-10 value of $955 million at the end of 2012.

Also in Oklahoma, the company’s Red River units posted proved reserves of 78 MMboe with a PV-10 value of $2 billion.

“Exploration and development activity was the primary driver in [our] 2012 proved reserves growth,” the company said. According to Continental, 234 MMboe of proved reserves were added in 2012, of which 27% (63 MMboe) were PDP and the remainder (171 MMboe) were classified as proved undeveloped reserves (PUD).

“[We] deferred some fourth quarter well completions to stay within [our] capital expenditure budget for 2012,” the company said, adding that 4Q2012 “was the 19th consecutive quarter in which Continental has increased production compared with the immediately previous quarter.”

Continental said its current production is about 116,000 boe/d, a figure that includes the producing assets acquired from Samson in December.

Shares of Continental on the New York Stock Exchange were trading at $80.43/share during afternoon trading on Thursday, down 1.49% ($1.22/share) from Wednesday.