In the midst of continued oil/natural gas production growth, albeit at a slower pace, North Dakota’s drilling activity has slowed significantly and the amount of hydraulic fracturing (fracking) even more so, according to the state’s top oil/gas official. Activity is projected to increase again next year, however, with continuing technology advances. 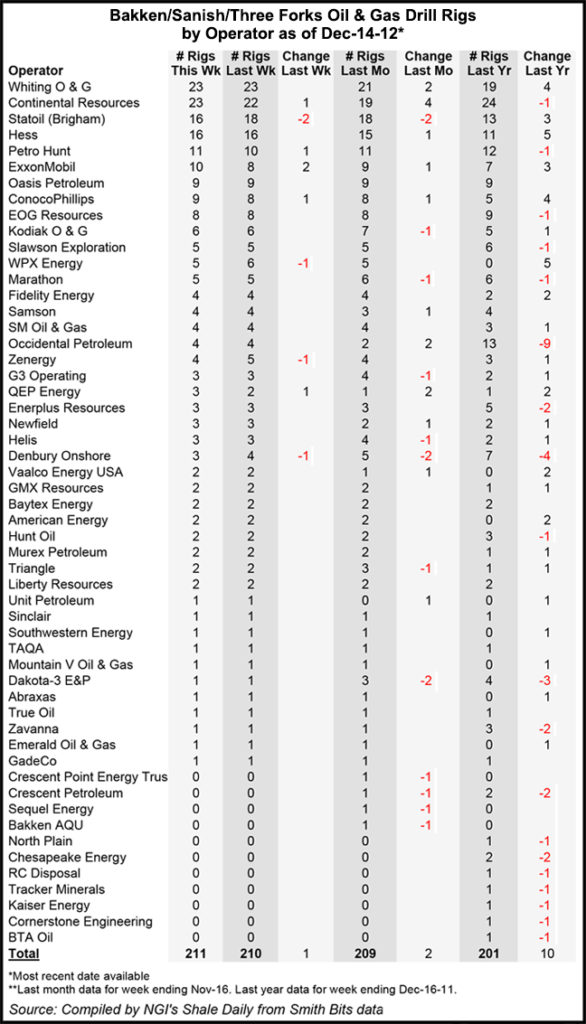 Department of Mineral Resources (DMR) Director Lynn Helms said there has been a marked increase in the number of wells that sat idle because they were waiting for fracking services.

“What this indicates is that operators continue to drill a significant number of wells as a means of retaining leases, but they postpone the major investment of hydraulic fracturing,” Helms told a webcast audience Monday. “That investment has become a significant part of Bakken well costs.”

According to Smith Bits data and NGI‘s Shale Daily calculations for the week ending Dec. 14, Whiting O&G and Continental Resources Inc., each with 23 rigs, were the most active operators in the Bakken/Sanish/Three Forks region, followed by Statoil ASA and Hess Corp., both with 16 rigs, and Petro-Hunt LLC and ExxonMobil Corp., with 11 and 10 rigs, respectively. In total there were 211 rigs drilling in the region, which was up 10 rigs from one year ago.

The average well in the Bakken, where 95% of the state’s oil/gas production is centered, costs $9-11 million, according to Helms. Fracking averages nearly half of that cost, or about $5 million, he said.

“In October, there was a significant amount of wells that operators decided to postpone, or slow down the fracturing services on, in an effort to conserve capital, or use it for drilling rather than hydraulic fracturing,” he said.

“Nevertheless, the companies say that starting in January, with new capital budgets, they plan to ramp drilling back up toward about 200 rigs [from the current 180]. We talked to some of the biggest Bakken drillers, such as Continental Resources, which plans to drill 60 more wells next year than it did this year.”

Helms said other major players, such as Hess and Whiting, have indicated that they, too, will increase the number of wells they drill next year. “So we believe that shortly after the first of the year, we will begin to see the rig count increase again, and we will see a lot of mobilization of hydraulic fracturing crews to try to catch up with the increased drilling rig count,” Helms said.

The growth recently has continued to be in oil production, with natural gas staying relatively flat. According to Helms, that as an outgrowth of dry gas producers outside the Bakken reducing their production “pretty substantially” in the face of low gas prices. In contrast, Bakken gas is still “fetching a very good price,” and production increased there, he said.

Behind the number of drilling rigs, wells and permits being issued, improved efficiencies and technological advances are greatly increasing the productivity of the operators, Helms said. Where the big operators have been getting 10-12 wells drilled annually for each rig in action, that number is expected to increase to 14 by the end of 2013, he said.

“The operators continue to find better drill rigs, better drilling systems and increase that efficiency in the drilling arena. That means the hydraulic fracturing folks are going to have to get very busy to keep up with that.”

Helms said the Bakken’s biggest driller, Continental Resources, will have drilled 270 wells by the end of this year, and it expects to drill 310-320 wells in 2013. “They have a very intense program, and they are very focused on the Three Forks formation.”