While analysts and regulators continue to question rail’s role in U.S. energy transport, speakers at the Williston Basin Petroleum Conference in Bismarck, ND, on Tuesday predicted increased use of rail shipment as U.S. crude oil production grows by another 3-4 million b/d over the next five to seven years. 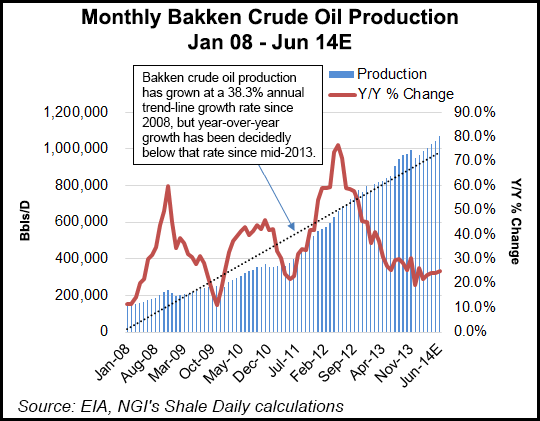 Tad True, a vice president of True Cos.’ oil pipelines, which connect North Dakota’s Bakken/Three Forks formations to markets in the West, made a case for more — not less — U.S. rail shipment of crude oil. While acknowledging doubters and questions about safety measures, he and speaker Kip Wills, central regional director for enforcement at the U.S. Department of Transportation’s Pipeline Hazardous Materials and Safety Administration (PHMSA), embraced rail as a major transportation option, given the projections for a long-term continuation of the shale revolution.

Bakken crude oil production has grown at a 38.3% annual trend-line growth rate since 2008, but year-over-year growth has been decidedly below that rate since mid-2013, according to Energy Information Administration data and NGI’s Shale Daily calculations.

True, whose companies operate 4,000 miles and 270,000 b/d of takeaway oil capacity in Belle Fourche and Bridger pipelines covering the Powder River and Williston basins, talked about the dramatic changes (up and down) since 2012 in terms of the use of rail versus pipeline transportation, noting that the shifts have coincided with narrowing and widening of the price differentials between basins. After seeing rail and pipeline dominance flip-flop over a three-year period, True said the need for rail is paramount when all of the major plays in the Midcontinent are considered.

The basins are sitting in the nation’s center with 3-4 million b/d of additional oil production waiting to burst forth over the next few years, True said. “To put that into context, that would require up to five Keystone XL proposed projects” if pipelines were to carry all of the additional production. He said this year the TransCanada Corp. oilsands pipeline project will be marking its sixth year of trying to gain U.S. authorization.

“Given this, it should be clearly evident why we need rail as part of the [oil] transportation picture,” he said. His company plans to open and eventually expand its 80,000 b/d Fort Laramie, WY, rail oil facility to handle both Niobrara formation and Bakken oil supplies. Ultimately, for the first time in six years, the Guernsey, WY, oil hub would have excess export capacity because of a combination of additional rail and pipeline capacity, True said.

“The end-state for the Bakken will be a combination of rail and pipeline transportation, and the inbound/outbound volume increases will just make Guernsey more liquid,” he said. “Eventually, Guernesy will be tied for the first time ever to a Nymex [New York Mercantile Exchange] market, and Fort Laramie oil rail facility will tie Guernsey to West Coast markets.”

Wills also painted a positive picture for building closer industry-regulatory collaboration to address the crude rail questions. Wills does not make clear distinctions between rail and pipeline oil transportation, noting that he sees the options being traditional pipelines and “virtual pipelines,” wellhead-truck-to-rail-facility transportation to barges or refineries. “That is still a pipeline as far as I am concerned.”

The challenge for federal regulators and the industry is “how does it get done safely,” Wills said, adding that PHMSA’s job involves regulating about a million energy shipments daily. While the amount of crude oil shipped by rail has quadrupled in the past five years, accidents have declined overall by 43%, Wills said. “Because of the economics, I don’t think we will see a significant decrease in oil rail shipments,” he said.