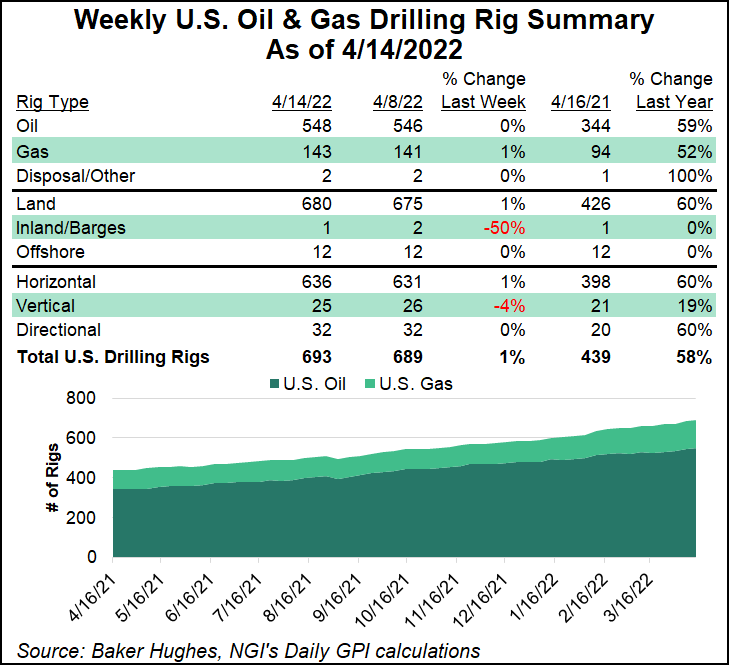 The combined U.S. rig count climbed to 693 for the week, up 254 units from its year-earlier total of 439. Land drilling increased by five rigs, partially offset by the departure of one rig from inland waters. The Gulf of Mexico count held steady at 12 rigs.

Five directional rigs were added, with total vertical rigs declining by one, according to the BKR numbers, which are based in part on data from Enverus.

In Canada, four oil-directed rigs and four natural gas-directed rigs exited during the week, dropping the Canadian count eight units to 103. That’s up from 56 in the year-earlier period.

Broken down by major drilling region, the Eagle Ford Shale led with an increase of three rigs, raising its count to 60, versus 33 in the year-ago period. The Permian Basin added two rigs for the period, while the Barnett Shale and Cana Woodford each added one rig to their respective totals.

U.S. crude oil production for the week ended April 8 held even with the prior week at 11.8 million b/d — after hovering around 11.6 million b/d through most of February and March, the Energy Information Administration (EIA) said in its latest Weekly Petroleum Status Report.

Output, however, remains more than 1 million b/d below pre-pandemic highs and may struggle to climb in the near term, given mounting demand uncertainty caused by geopolitical strife and a resurgence of the coronavirus pandemic.