A result of gains in both oil and natural gas-directed drilling, the combined U.S. rig count climbed seven units to 576 for the week ended Friday (Dec. 10), according to updated figures from Baker Hughes Co. (BKR). 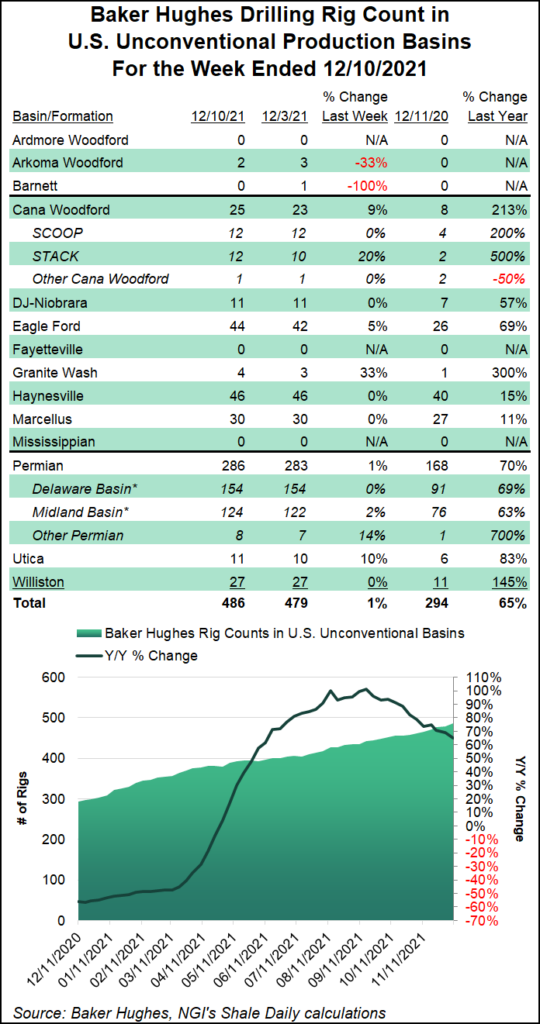 Four oil-directed rigs and three natural gas-directed units were added in the United States for the week, putting the overall domestic tally 238 units ahead of its year-earlier total, according to the BKR numbers, which are partly based on data from Enverus.

Six U.S. rigs were added on land, along with one in the Gulf of Mexico. Eight horizontal rigs were added, partially offset by a one-rig decline in vertical units.

The Canadian rig count fell three units to 177 for the week, up 66 rigs year/year. The three-rig net decline there was focused entirely in the oil patch.

Broken down by major region, the Permian Basin led with an additional three rigs on the week, with the Cana Woodford and Eagle Ford Shale each adding two rigs. The Granite Wash and Utica Shale each added a rig, while the Arkoma Woodford and Barnett Shale each saw one rig exit for the period.

In the state-by-state breakdown, New Mexico and Oklahoma each posted net increases of two rigs, while Louisiana, Ohio, Texas, Utah and West Virginia each added one rig overall. Alaska and Pennsylvania each dropped one rig week/week, according to the BKR data.

Looking past recent concerns about the Omicron variant of the coronavirus and rising global oil output, Raymond James Financial Inc. analysts in a recent note sounded an increasingly optimistic tone about strong crude prices through 2023.

“Our bullish oil view over the next few years not only remains firm, but we’re actually increasing our long-term price forecast,” the analysts, John Freeman and Justin Jenkins, said.

A combination of low global inventories, ongoing demand increases and modest U.S. production relative to pre-pandemic levels should support West Texas Intermediate (WTI) prices over the next couple of years, they said. While up this year, U.S. output remains about 1.5 million b/d below the early 2020 peak, prior to coronavirus outbreaks, according to Energy Information Administration data.

Against that backdrop, the Raymond James team envisions WTI prices starting 2022 at $70/bbl and averaging $75 for the year. They expect the U.S. benchmark to reach $80 by the final quarter of next year and hold at that level in 2023.