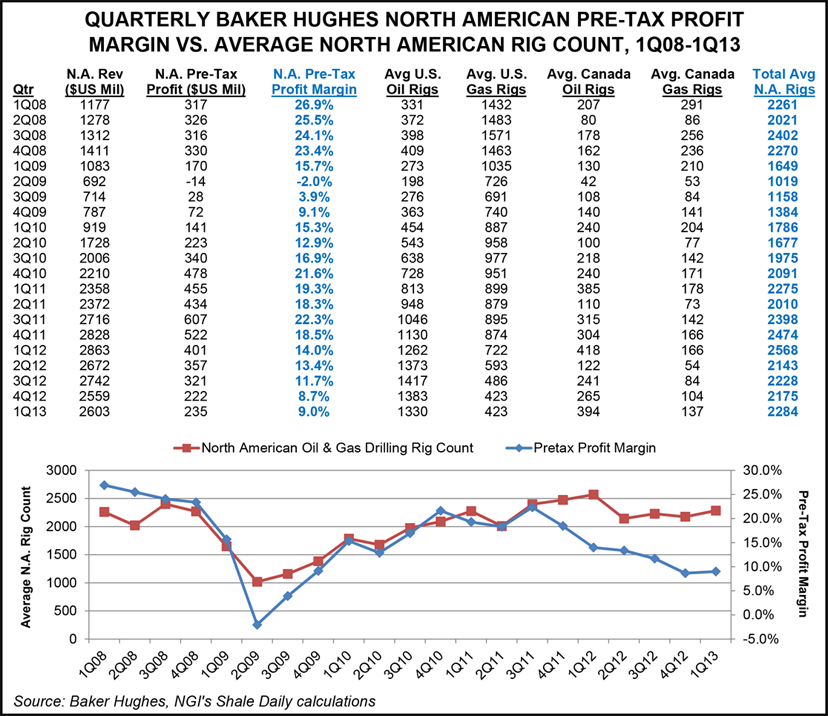 Halliburton Co., the No. 2 provider, is set to deliver its quarterly results on Monday.

The onslaught of natural gas production resulted in low prices, which led exploration and production companies to move rigs to better priced oil and liquids targets in the past two years. However, the rocky transition has led to inefficiencies and higher costs for the services companies, as they move crews and equipment across the country. Baker’s pressure pumping business, key for unconventional production, was hit particularly hard.

Baker is “starting to see the U.S. market settle down. The declines in spot pricing for well stimulation are showing signs of tapering off, and the onshore rig count is projected to begin climbing after more than a year of consecutive quarterly declines” (see related story).

“North America took a step in the right direction” during the first three months, CEO Martin Craighead said during a conference call Friday. Even though earnings were down by almost one-third from a year ago, drilling in Canada and a strong pressure pumping business raised quarterly profits in North America from the final period of 2012 when profits plunged to $211 million from $331 million in 4Q2011 (see Shale Daily, Jan. 24).

Baker previously indicated it would cut capital expenditures by 30% this year and reduce the share directed to North America. That plan appeared to be on track. Revenue in 1Q2013 jumped 20% from a year ago in the Middle East/Asia Pacific region, 4.4% in Europe/Africa/Caspian operations, and 3% in Latin America. It was the first quarter in which the Middle East/Asia Pacific region led as the largest international segment.

Meanwhile, Schlumberger management is enthusiastic about its global operations, but it’s less certain about what’s ahead for North America. Profits in the first period fell 3% from a year ago $1.26 billion (94 cents/share) from year-ago earnings of $1.3 billion (97 cents). Operating margins dropped to 15.7% from 17%.

“The outlook for North America remains uncertain, with lower-than-expected rig activity and continuing pricing weakness,” CEO Paal Kibsgaard told analysts during a conference call. “And while cold weather and flattening natural gas production has resulted in significant storage withdrawals, this has yet to result in any change in dry gas drilling activity.”

In North America, he said, “strong activity in Canada and solid results from the U.S. Gulf of Mexico partially offset further pricing and activity weakness on land in the U.S.”

Natural gas prices rose 15% in the quarter, but gas drilling hasn’t bounced back and it’s not certain that it will, he told analysts. “In North America, pricing for land services weakened in general and further pressure on pressure pumping contracts was observed.”

Schlumberger’s “overall outlook for 2013 remains largely unchanged from our earlier projections, both in terms of GDP [gross domestic product] growth, as well as the fundamentals for the global oil and gas markets. We still expect that oil supply will continue to grow in North America while other non-OPEC production will likely continue to face challenges, and we expect global spare capacity to remain around current levels — absent any unexpected macroeconomic change or geopolitical event.”