Baker Hughes Inc. has been riding a bit of a rough road as it casts off its North American pressure pumping business and prepares for the mega-merger with a unit of General Electric (GE), but the destination — a broader price recovery — is in sight, CEO Martin Craighead said Tuesday. 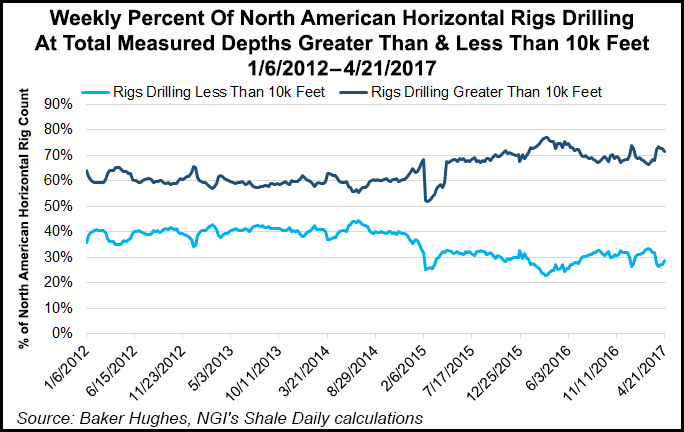 “Looking more closely at the market trends in the first quarter, the ramp-up in North America has been more robust than many had expected,” Craighead said. “Along with this growth, we’ve had to work through the challenge of supply chain tightness with labor and materials cost inflation impacting select product lines and basins.”

While Baker Hughes has seen signs of service capacity absorption in select product lines in some North American basins, there is still a fair amount of excess service capacity that must be absorbed before service pricing gains can take hold more consistently.

“To that end, for most drilling-related product lines, where we’ve seen strong demand, we believe we’re on the cusp of pricing recovery. What we’re seeing today tied back to what we said in October, when we outlined the series of milestones that we believe need to be reached in order for a broader recovery to take place, and before market predictability can return in a meaningful way.”

“Since then, we’ve seen operating expense implementation of production cuts,” he said. “But at the same time, we’ve also seen a significant growth in U.S. land rigs, along with an increase in production. In addition, inventory levels have remained stubbornly high, while more recent projections for global oil demand growth have been scaled back.”

He also said commodity prices needed to stabilize and be sustained in the mid-to-high $50/bbl range for customer confidence to improve and investments to accelerate. Third, activity had to increase meaningfully before excess service capacity could be absorbed and pricing recovery could take place.

“In the context of those three milestones, I would characterize the North American market is still finding its footing or continuing to head in the right direction toward reaching those thresholds,” he said. “At the same time, we remain mindful of geopolitical dynamics, economic growth, fiscal policy and currency fluctuations, all of which remained variables that could impact supply and demand and by extension, oil prices.”

The U.S. onshore market “has evolved into what I would describe as a bifurcated market, in which operators are demanding highly advanced solutions, such as our leading AutoTrak, rotary steerable family, for certain challenging applications, and on the opposite end of the spectrum, conventional motor drilling and low cost completions,” Craighead said. “Both ends of the spectrum are growing and represent continued opportunities for Baker Hughes going forward.”

Operators continue to drill longer laterals and lower their costs, a shift that plays well into the drilling and evaluation segments, “particularly, our rotary steerable franchise and diverse offerings of innovative drillbits,” he said. Between January and March, those two product lines experienced better-than-expected growth, and the company sold out of its latest generation of AutoTrak for rotary drilling. As a result, Baker Hughes is accelerating its manufacturing to ensure it can continue to capture the ongoing growth.

The well construction business also is outperforming, with drilling records set during 1Q2017 in the Marcellus and Utica shales. Four wells, two in each basin, achieved one-mile-a-day drilling records, 5,280 feet over a 24-hour period.

“On the last well, Baker Hughes set a new record for the Marcellus, with a remarkable 7,380 feet drilled in 24 hours,” Craighead said. “Similarly, our well production business will remain a key differentiator in a market in which production maximization becomes even more critical.”

As it sets up for the GE merger, the CEO said the combined company is expected to “unite the physical and digital worlds, an innovation engine that is second to none, cross industry knowledge that spans the full stream value chain and two outstanding teams of people.”

Net losses totaled $129 million (minus 30 cents/share) in 1Q2017, compared with year-ago losses of nearly $1 billion (minus $2.22). The company reduced expenses from a year ago by almost 30%, or more than $900 million, to $2.29 billion. Revenue slumped by 15% to $2.26 billion. Negative impacts in 1Q2017 included $114 million of adjusted items (26 cents/share), which included impairment and restructuring charges of $83 million after tax, primarily related to one-time severance and asset charges, along with a $31 million merger cost. The adjusted net loss was $15 million (minus 4 cents/share).

“Looking ahead, based on current activity growth trends in North America, we are forecasting revenues in the second quarter to modestly increase sequentially as activity growth in the U.S. onshore well construction product line is forecasted to more than offset the seasonal decline in Canada in ongoing activity reductions in the Gulf of Mexico,” CFO Kimberly Ross said.