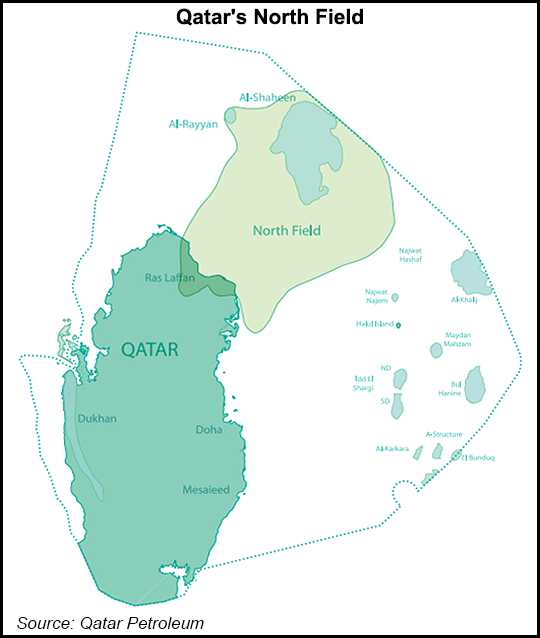 The Houston-based oilfield services giant said it is among the largest liquefied natural gas (LNG) deals it has secured in the past five years. Financial terms were not disclosed.

State-owned Qatar Petroleum in April started drilling wells at its offshore North Field for an ambitious plan to build four large liquefaction trains to increase the country’s LNG output by 43%. Qatar is already the world’s largest LNG producer with exports of 77.8 mmt last year, according to the International Gas Union.

The turbines will have low nitrous oxide emissions and the compression technology will reduce carbon dioxide emissions by about 5% compared with previous technologies, Baker Hughes said.

Qatar in 2017 ended a moratorium it had imposed in 2005 on further development of the North Field and announced the four-train expansion in 2018. The decision came amid growing competition from LNG producers around the world, including major exporters Australia, the United States and Russia.

Qatar will account for a large share of a projected 100 mmty shortfall in global LNG supply by end of the decade, limiting supply needed elsewhere through 2028, Wood Mackenzie principal analyst Alex Munton said in a webinar last week.

Qatar Petroleum is a joint venture partner with ExxonMobil in the $10 billion, 18.1 mmty Golden Pass LNG export project they are building in Texas, scheduled to come online in 2024.

Baker Hughes said in its second quarter earnings call in July that demand for LNG equipment remains challenging in the near term but it remains optimistic about long-term fundamentals.

“As we look ahead to the next two decades, in almost any scenario natural gas will be a key transition fuel, and likely a destination fuel for a lower carbon future,” Baker Hughes CEO Lorenzo Simonelli said Tuesday.