Baker Hughes Co. is expanding its global carbon capture portfolio with an investment in an upstart company developing synthetic natural gas (SNG) that could be stored and transported in existing pipelines. 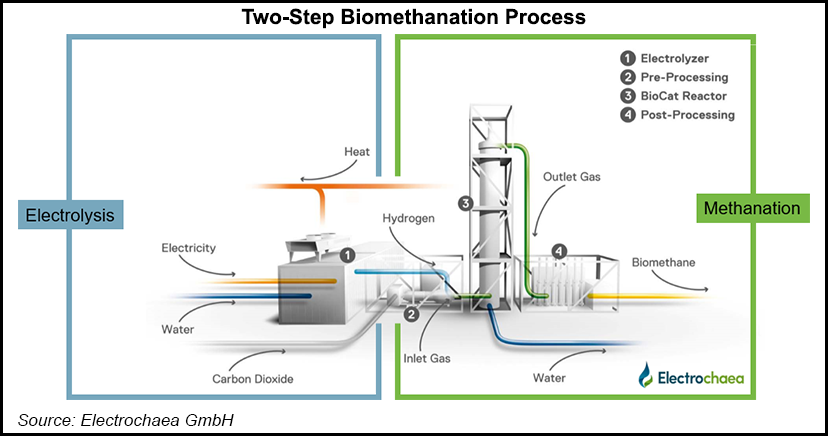 The Houston-based oilfield services operator said Monday it is taking a 15% stake and a board seat in Germany’s Electrochaea GmbH. The Munich firm’s proprietary biomethanation technology manufactures SNG from green hydrogen and carbon dioxide (CO2). The SNG could be stored and transported in an existing gas grid.

Baker Hughes, which would draw on its broader carbon capture technologies, plans to work with Electrochaea to commercialize an integrated carbon capture and utilization (CCU) solution. The goal is to give customers the ability to transform CO2 emissions into SNG.

Unlike renewable natural gas and biomethane, or fossil-based natural gas, SNG reuses CO2 that would otherwise be emitted into the atmosphere.

“The combination of these technologies provides an integrated method to decarbonize hard to abate sectors such as road transportation and heating,” said Baker Hughes’ Rod Christie, executive vice president of Turbomachinery & Process Solutions (TPS). “This agreement is another deliberate step in our strategy to position Baker Hughes for new energy frontiers like CCU by investing in emerging technologies and combining them with our own proven capabilities.”

Electrochaea is planning to deploy its technology with a group of partners to produce more than 15 Bcf/d of SNG by 2025. It said it has operated industrial-scale pilot plants in Denmark, Switzerland and the United States.

Earlier this month Baker Hughes also announced plans to develop a CCUS hub in Norway. It has a memorandum of understanding to collaborate with Norway’s Borg CO2 AS to decarbonize the Viken region of the country.

The Viken region emits an estimated 700,000 tons/year of CO2. The goal is to capture and store 90% of total emissions, or around 630,000 tons/year, at the Northern Lights offshore storage facility.

“Today, industrial clusters represent around 20% of Europe’s CO2 emissions,” Christie said. “Meaningful decarbonization is not possible without carbon capture, utilization and storage, and this collaboration demonstrates how CCUS technology is accelerating from concept toward commercialization with real world impact.

“Our collaboration with Borg CO2 will accelerate development of new energy frontiers like CCUS, and we believe it is critical to help them at an early stage by strategically supporting our best in class technology.”

A preliminary front-end engineering design study is expected to be completed by year’s end.

“With the technology competencies and experience of Baker Hughes supporting us, we believe that Borg CO2 is better positioned to take the next steps toward commercialization and achieve our goals for the project,” said Borg CO2 managing director Tore Lundestad.

“A project like this showcases a win-win approach, where permanent storage combined with the possibility of sustainable usage of smaller volumes of biogenic CO2 will help to achieve net zero, and with the industrial facilities potentially receiving revenue by selling negative CO2 emissions.”