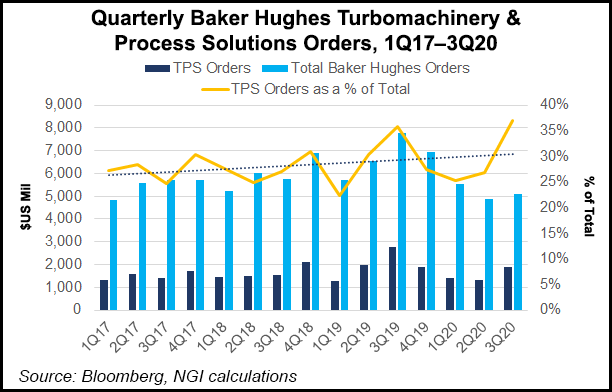 CEO Lorenzo Simonelli said he sees positives for natural gas, pointing to the major liquefied natural gas (LNG) order in Qatar. However, like his fellow oilfield services executives at Schlumberger Ltd. and Halliburton Co., energy demand has begun to flatten as Covid-19 snakes its way across the globe.

“After significant turmoil during the first half of the year, oil markets have somewhat stabilized,” Simonelli said. “However, demand recovery is beginning to level off and significant excess capacity remains, which could create volatility in the future.

“The outlook for natural gas is slightly more optimistic as forward prices have improved with strong demand in Asia and lower expected future gas production in the U.S.”

The decline in orders was attributed to “lower order intake across all segments,” management said. Equipment orders were down year/year by 40%, with service orders off 28%. The total book-to-bill ratio in 3Q2020 was 1; the equipment book-to-bill ratio was 1.1.

There were some solid gains for TPS in 3Q2020, as orders expanded for LNG equipment. Orders jumped 44% sequentially to nearly $1.9 billion. Revenue in the segment grew by 30% sequentially and 26% year/year.

In addition, TPS was awarded a contract in Latin America for a floating, production, storage and offloading project, aka FPSO, for power generation, compression and related equipment, that includes six gas turbines and two high pressure compressors for gas reinjection.

Meanwhile, remote operations are becoming an ever more important business for the OFS segment, Simonelli noted. Of note, 83% of global drilling services jobs in 3Q2020 were remote, compared with 72% in the second quarter and 60% in 1Q2020.

Remote drilling increased mostly in Asia Pacific and the Middle East, and 100% of drilling jobs were completed using remote operations in Latin America and the Russia Caspian region.

“On the economic front, the global economy has rebounded from the severe contraction experienced in the second quarter,” Simonelli told investors. “However, the recovery so far has proven to be quite uneven and the risk of a second wave impacting economic demand remains relatively high. While some industrial sectors have experienced a rebound in activity, others have remained somewhat suppressed.

“The current environment has also resulted in the acceleration of different parts of the economy, including technology adoption and the acceptance of new ways of working and living. Importantly, one of these areas where we have been witnessing a step change in activity and mindset is the broader energy industry.”

The pandemic “has revealed the speed at which the environment can respond to lower carbon levels. This has accelerated the debate on how to fuel economic growth while transitioning to a lower carbon future.”

The energy transition acceleration is “in society at large, and increasingly from our customers…We also believe that the changes rapidly unfolding across the oil and gas landscape warrant an acceleration of this strategy.”

On the cost side, Baker is continuing a “rigorous” reduction program outlined in April, to target $700 million in annualized savings by the end of the year.

“Through the third quarter, we have achieved approximately 75% of our target and believe that we will likely achieve a higher run rate by the end of the year,” said the CEO. “On the portfolio front, we have already divested of several businesses this year and will continue to evaluate further actions, specifically around businesses that likely don’t have the potential to meet our return requirements.”

Simonelli did not share what could be for sale or whether the company could exit some businesses or form joint ventures and partnerships.

“Given the subdued upstream outlook, the primary growth opportunities we see within our existing product and service footprint are the broader industrial sector, specialty chemicals and nonmetallic materials,” he said. “On the industrial side, we see the opportunity to develop a solid industrial platform by leveraging the strongest core competencies within our TPS and Digital Solutions segments.”

Meanwhile, the company is advancing technologies to support the energy transition. For example, TPS successfully tested what it said was the world’s first hybrid hydrogen turbine designed for a natural gas network with Italian pipeline giant Snam SpA.

The turbine test blended hydrogen with natural gas in Snam’s current transportation network infrastructure. The test, using a NovaLT 12 gas turbine with a 10% blend of hydrogen and gas, compressed and moved the fuel blend through the pipeline network, while using the same fuel to power itself.

Within DS, the company continued to gain traction with Flare.IQ technology, securing a five-year contract with a North American customer. Flare.IQ is designed to help operators manage their flaring assets remotely and to reduce methane emissions.