Responding to declining revenues amid continued commodity price pressures, Baker Hughes Inc. (BHI) looked to cut costs during the second quarter, including 3,000 layoffs as part of an organizational overhaul. 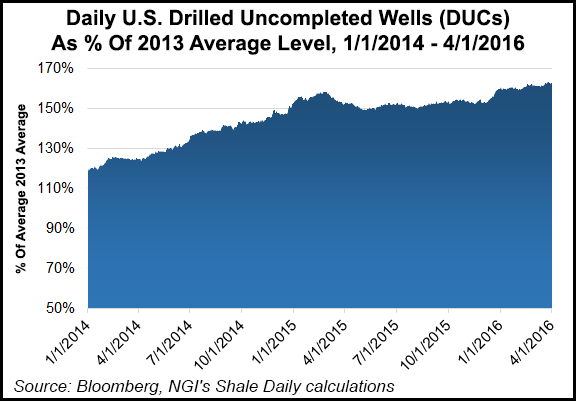 BHI began the restructuring with a target of about $500 million in annualized cost savings, management told investors during the Houston-based oilfield services (OFS) giant’s quarterly conference call Thursday. CFO Kimberly Ross said the company realized about $450 million in annualized savings during the quarter, with two thirds of that resulting from the workforce reduction.

BHI was not the only industry player to reduce its workforce during the second quarter (see Shale Daily, July 22).

“We don’t expect to see any meaningful recovery in the second half of the year,” he said. “While we see production edge down, particularly in North America, that has been offset by additional production elsewhere. While our customers have substantially slowed, reduced or altogether canceled a large number of exploratory and field development campaigns, I’ve yet to see an economic catalyst that will create a step change to demand that would lead to materially higher oil prices.

“In addition, U.S. crude storage levels are at record highs and there is a significant backlog of” drilled but uncompleted (DUC) wells, he said. “On the demand side, growth is only forecasted to be modestly higher than expectations at the beginning of the year.” And the British vote to exit the European Union, by strengthening the dollar, could put further negative pressure on oil prices, according to Craighead.

“Many of the customers I speak to are standing pat at today’s oil prices. And yes, many say they will ramp activity as oil prices reach the $50/bbl mark,” Craighead said. “However, like in past cycles, service sector costs will rise with increased activity and that will erode incremental cash margins for the operators. Accordingly, I believe oil prices in the upper $50s at a minimum are required for sustainable recovery in North America.”

Craighead said he expects completion schedules on the estimated 5,000 DUCs in North America to pick up as prices recover. Despite the DUC backlog, he said the North American rig count should “increase modestly” through 2H2016 based on “seasonal gains in Canada and a slight uptick in the U.S. market. I describe it as a slow grind upwards for North America. Internationally, we expect rig counts to continue slight declines in most countries” for 2H2016.

Last week, two of BHI’s OFS competitors, Schlumberger Ltd. and Halliburton Co., both described a sense of optimism returning to the exploration and production sector, with 2Q2016 potentially marking the bottom of the downturn (see Shale Daily, July 25; July 20).

But Thursday, responding to an analyst’s question on the North American outlook, Craighead struck a slightly different tone, saying he doesn’t “subscribe to the hopeful commentary that I think gets thrown around a lot by your community. And I think that the customers are going to need something that’s vectoring in on around $60/bbl or high $50s, just because certain costs on our side are going to go up.” He said BHI will need “to see some stability well north of $55 before there is a lot of motivation for us to be bringing back capital into North America.”

Revenues in the second quarter fell to $2.4 billion, down sharply from revenues of just under $4 billion in the year-ago period. Revenues were also down sequentially from the $2.7 billion reported for 1Q2016.

In North America, revenue decreased 18% sequentially to $668 million, compared to a 35% decline in the rig count. Ross attributed the drop in North America to the seasonal spring break-up in Canada and reduced U.S. onshore activity. North American revenues in the year-ago quarter totaled $1.5 billion.

International revenues for the second quarter came in at $1.5 billion, a 9% sequential decrease. The largest declines were in BHI’s Latin America segment, driven by a reduction in Mexican offshore activity and declining revenues from Ecuador, Ross said.

Cash flow for the quarter totaled $3.6 billion, primarily a result of the $3.5 billion termination fee collected after BHI’s failed merger with Halliburton (see Shale Daily, May 2). Offsetting the merger termination fee, BHI recorded $1.1 billion in impairment and restructuring charges, along with a $1.84 billion goodwill impairment for the quarter.

For a full listing of 2Q2016 industry earnings calls, including links to NGI’s coverage of both the company and the call, please see NGI’s 2Q16 Earnings Calls List PDF.