In a blockbuster deal worth an estimated $32 billion, General Electric (GE) on Monday agreed to become majority shareholder in a partnership combining its oil and natural gas business with Baker Hughes Inc., creating the second largest oilfield operator in the world. 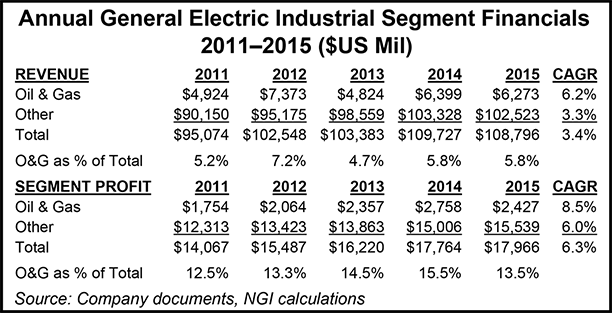 The combination, first rumored last week, would eclipse in revenue size the current No. 2 OFS Halliburton Co., which saw its merger attempt with Baker fall apart earlier this year (see Daily GPI, Oct. 28; May 2). Under terms of the new agreement, Baker would own 37.5% of the company; GE would own 62.5%.

“This transaction creates an industry leader, one that is ideally positioned to grow in any market,” Immelt said during a conference call. “Oil and gas customers demand more productive solutions. This can only be achieved through technical innovation and service execution, the hallmarks of GE and Baker Hughes.”

It’s the “right time in the cycle…It has always been our belief that the oil and gas industry would be an early adapter of analytics.”

Asked how long it would take to transform the “new” Baker into a digital industrial company, Craighead said, “We’re already doing that. We’re already underway…This deal is a result of the initial discussions around the digital industrial and what the capabilities were, and we’ve already sat down with a customer of quite large significance and explored that. And they’ve already actually even signed up to work with us. So, this isn’t a three-month, six-month, one year. This is already underway.”

Simonelli said the oil and gas industry “is maybe the first in terms of driving the industrial internet. Terms like asset performance management, no unplanned downtime, really came from this industry. The customers know how to monetize an extra hour, an extra day better than any other customers in the world. So, I think in the end, that’s what this is all about…The combination of…an analytical operating platform on top of an oilfield services capability, that’s precisely the competitive advantage in the industry.”

An OFS platform “is essential to deliver digitally enabled offerings to our customers,” Immelt said, noting that GE’s Predix, its industrial internet platform, could become “an industry standard and synonymous with improved customer outcomes.”

However, the transaction is not assuming the industry downturn is over. In fact, management is assuming that oil prices will average $45-60/bbl through 2019.

That view matches the one Immelt gave during the 3Q2016 conference call last week. He said oil and gas orders fell 21% year/year and fourth quarter orders were expected to be flat (see Daily GPI, Oct. 25).

However, demand for global oil and natural gas is growing — as are customer desires to reduce costs and improve production, Immelt said. That means there are growth opportunities across the board.

Management is assuming the compound annual growth rate (CAGR) for global gas demand will rise by 2% a year to 2025 and by 1.5% to 2040. Liquefied natural gas (LNG) is expected to grow at an even faster clip, with North American gas the key “long-term, low cost source.”

On the oil side, the CAGR is expected to be about 1% to 2025, with North American unconventionals leading the pack and contributing 25% of exploration and production spend.

The offshore also is expected to be a big contributor to growth once the recovery is underway, with new fields emerging on the international onshore side too.

The re-imagined company would deliver “enhanced technology products, solutions and services across the entire spectrum of the oil and gas industry,” Craighead said during the conference call.

The combination as envisioned would become an “end-to-end provider of technology, equipment and services across the full spectrum of the oil and gas value chain — upstream, midstream and downstream. That is a truly unique combination.

Fueled by the technology breakthroughs of the GE Store, innovation could be applied across all of GE’s business segments to deliver “step-changes in economic performance and efficiency for our customers,” Craighead said.

In GE, every business may share and access the same technology, markets, structure and intellect, i.e. the GE Store, which is governed by “culture and simplification,” Immelt said.

That means that the newly formed Baker would be “far more resilient and cycle-resistant,” able to share research and development (R&D), and work for customers across every aspect of their business, Craighead said.

As an example, efficiencies gained by combining the R&D and manufacturing capabilities “will allow the company to sustain and continue robust investment in innovation throughout every phase of the industry cycle,” he said. “To that end, I see this transaction as an acceleration of the existing strategy of legacy Baker Hughes…to radically improve the economics of oil and gas production for our customers.”

Some of the “earliest conversations centered on a technology venture in the realm of digitization and big data,” Craighead told investors. “With the ability to pair the reservoir knowledge and intelligent products of legacy Baker Hughes with GE’s industry leading digital platform, we see an opportunity to unleash the power of digitization and data that has long been anticipated in the oil and gas sector.

“This is a great example of uniting leading digital and physical technology to create something far greater for our customers.”

In subsea systems, turbomachinery and digital solutions, GE Oil & Gas is one of the top three in the industry.

Baker’s five business segments with 2015 revenue share are advanced drilling services (24%); logging/evaluation (6%); completions systems (40%); production optimization (22%); and industrial services (8%). Baker is one of the top three providers in every segment except industrial services.

The “full stream combination” would provide a wide array of solutions from drilling/completions, equipment/drilling systems; LNG/pipeline solutions and refinery/petrochemical offerings.

And as it competes for business, the new Baker would have upstream turbomachinery, pipeline solutions and LNG liquefaction, businesses that today are not offered by No. 1 OFS Schlumberger Ltd., nor by Halliburton or No. 4 Weatherford International plc.

“From reservoir interpretation to downstream on process and equipment, we will be present from the molecule to the megawatt,” Simonelli said. “Conservatively,” the combination expects to achieve $1.2 billion in cost synergies.

“As we were exploring this opportunity, the term ”power to lift’ kept coming up,” Craighead said. For example, if Baker were able to build out its electrical submersible pumps business into sparsely populated areas of Oklahoma’s stacked reservoirs and the “outer fringes” of the Bakken, “the grid, the electrical structure is weak. Here you have the capabilities of putting power as part of the entire lifting conversation with customers…

“The conversations didn’t go into ‘how do we help the customer generate that infrastructure to run those pumps?’ Now our sales teams are going to be able to provide a broader solution, and there’s no one that can do that except us. Full stop.”

Under the terms of the agreement, unanimously approved by each board, GE would contribute $7.4 billion to fund a special one-time cash dividend of $17.50/share to Baker shareholders. The transaction, pending regulatory and Baker shareholder approval, is scheduled to close in mid-2017.

The combination would add about 4 cents/share to GE earnings in 2018 and 8 cents/share by 2020, according to Immelt. Once combined, management expects the combination to generate total runrate synergies of $1.6 billion by 2020, with a net present value of $14 billion. While this is primarily driven by cost out, management expects the new company to be positioned for growth as the industry rebounds.

The transaction is to be executed using a partnership structure through a newly listed corporation on the New York Stock Exchange, with dual headquarters in Houston and London. Baker would consist of nine directors, with GE appointing five including Immelt and Baker appointing four including Craighead. Executives from both companies are to be part of the new management team. The transaction is subject to approval by Baker shareholders and regulatory conditions.

“GE and Baker Hughes are bringing together mostly distinct yet complementary assets that will result in an industry leading integrated oilfield equipment and services company,” said Moody’s Russell Solomon, lead analyst for GE. “Moreover, the development is broadly in line with Moody’s prior expectations for the company’s capital deployment and industrialization strategies.

“The new publicly traded integrated oil and gas company will be considerably stronger and better positioned for the coming recovery in oil and gas end markets than either company otherwise would be on a standalone basis,” Solomon said. However, “the development is initially credit negative for the remaining GE industrial company, given the leveraging impact of the incremental debt funding and concurrent loss of the earnings stream from GE’s previously wholly owned oil and gas business.”

From a credit perspective, GE would not benefit from its ownership in the larger entity for a couple of years, according to Solomon.

“The transaction should boost the cash flow profile of GE over the intermediate term, nonetheless, as GE benefits from improving end markets for both its own and Baker Hughes’ business, as well as synergies related to initial cost-cutting initiatives and cross-selling of products and services,” he said.