Baker Hughes Inc. expects the North American rig count will “begin to stabilize” in the second half of this year, but things are expected to get worse before they get better, CEO Martin Craighead said Wednesday. 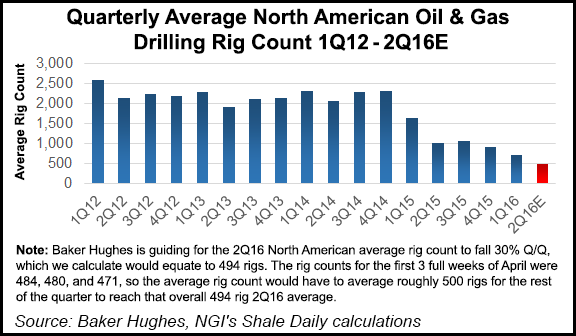 The Houston oilfield services (OFS) giant, the global authority on onshore and offshore rig counts, is forecasting the North American rig count will fall by 30% sequentially in the second quarter.

“For the second half of the year, we project the U.S. rig count will begin to stabilize, although we do not expect activity to meaningfully increase in 2016,” Craighead said. “Conversely, the international rig count is predicted to drop steadily through the end of the year as we see limited new projects in the pipeline.”

Baker issued its second quarter results but did not hold a conference call because of a pending merger with Halliburton Co., which could be scuttled later this week (see Shale Daily, April 25). There was no mention of the potential tie-up, but Craighead had plenty to say about the dire conditions faced by the energy industry.

The first three months of this year resulted in “another precipitous decline in activity, exceeding even the most pessimistic predictions,” he said. As exploration and production (E&P) companies continued to reduce spending to protect cash flows, “our revenue for the first quarter was down 21% sequentially. Compared to the prior year, revenue declined 42%, driven by lower activity as evident by the 41% global rig count drop, reduced pricing across most markets and the strategic decision to continue limiting our exposure to unprofitable onshore pressure pumping business in North America.”

Still, there were some positives.

“Despite the severity of these headwinds, decremental operating margins sequentially and year/year were contained to 28% and 13%, respectively,” Craighead said.

Decremental margins in effect measure the degree to which earnings decline with a given decline in revenue. The OFS sector quickly ramped up by adding employees and equipment to meet the surge in unconventional drilling demand, but as E&Ps have pulled back, the service sector has had to sharply reduce operations, some more adroitly than others.

For instance, Halliburton Co. reported earlier this week that its completions activity was off less than 10% in 1Q2016 and it posted 22% decrementals, proving that the company likely is faring better than some of its competitors (see Shale Daily, April 25). Meanwhile, Schlumberger Ltd.’s North American decremental operating margin increased to 30% in 1Q2016 from 20% in 4Q2015, as it moved to tailor its service capacity (see Shale Daily, April 22).

“Although we have taken significant actions to manage our cost structure during the downturn, we are retaining costs in our operating profit margins in compliance with the merger agreement,” Craighead noted. As they have worked toward combining their operations, Baker and Halliburton each have continued to keep spending higher in certain areas instead of pulling back, as some competitors have. “Additionally, the unique circumstances in which we are operating limit our ability to consider and action a broader range of measures required to align the company with the current and near-term market conditions.”

North American business was hit hard in the first quarter, with revenue down 28% sequentially as U.S. onshore activity disappeared along with pricing. Because of what Craighead said was “unsustainable pricing in onshore pressure pumping, we continue to limit the pursuit of certain opportunities as we strive for cash-flow-positive operations in this business. In spite of the drop in revenue, decremental operating margins of 15% were achieved in the region as a result of cost-saving measures and lower depreciation expense from prior-year impairments.” Overseas revenue was down 19% from the fourth quarter.

“In this environment, helping our customers maximize production while lowering overall costs is more critical than ever before,” the CEO said. “Our products and services put us in a remarkable position to lower the cost of well construction, optimize well production and increase ultimate recovery as we continue to leverage opportunities to convert our capabilities into earnings.”

Net losses totaled $981 million (minus $2.22/share), versus year-ago losses of $598 million (minus $1.35) and a sequential loss of $1.03 billion (minus $2.35). Revenue of $2.67 billion was down 42% year/year and 21% from the fourth quarter, with merger-related costs accounting for $102 million. Operating cash flow fell to a net loss of $981 million, versus a loss a year ago of $593 million. Operating results included costs in excess of 500 basis points, or 25 cents/share-plus, related to the pending Halliburton merger. Free cash flow (FCF) was minus $103 million. Excluding merger-related and restructuring payments, FCF was $193 million.

The decline in North America primarily was U.S. onshore-related, as the rig count dropped 26% from the fourth quarter. Revenue also was impacted by share losses in onshore pressure pumping “and increased pricing pressure, mainly in the completion and production product lines,” the company noted. Activity also declined in Canada, evident in the 6% sequential rig count drop, “as most projects remain uneconomical at current oil prices.”

Despite the erosion of margins in North America, the sequential 15% decremental operating margin was achieved by ongoing cost reduction measures, lower depreciation and amortization from prior-year impairments, reduced liquidated damages and other costs related to sand supply contracts.

“All product lines” in North America were impacted unfavorably by the activity drop, “with production chemicals, deepwater operations and artificial lift showing the most resilience.”

Capital expenditures totaled $86 million in 1Q2016, down 60% sequentially and 73% year/year. Corporate costs were $32 million, versus $29 million in 4Q2015 and $49 million a year earlier. The year/year reduction in corporate costs was attributed to workforce reductions and lower spend.

The industrial services arm also took a big hit, with revenue falling 14% sequentially mostly because of ongoing project delays in the process and pipeline services business stemming from reduced customer spending. Revenue also was negatively impacted by the seasonal drop in activity that occurs in the first quarter.