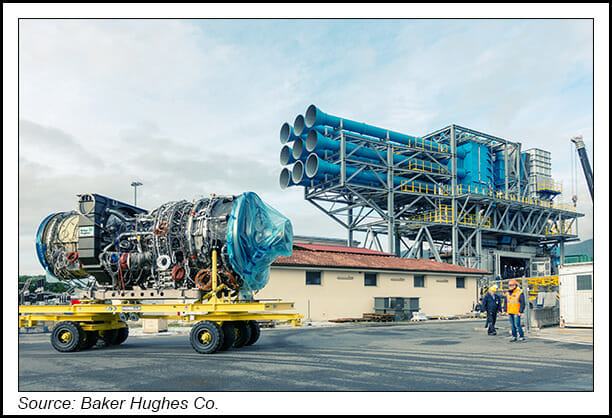 Simonelli and CFO Brian Worrell shared a microphone to detail for investors the 3Q2021 performance. Some “challenges” hit the bottom during the quarter, Simonelli said, partly because of supply chain issues, mirroring in part what Halliburton Co. reported Tuesday in its quarterly conference call.

Challenges aside, Simonelli said the outlook is positive into 2022 for orders in the Turbomachinery & Process Solutions (TPS) segment, which houses the LNG infrastructure business.

“We do expect as was mentioned that we’ll see double-digit order growth in 2022,” the CEO said. “A lot of that is driven by the LNG opportunities….” The company is forecasting that the capacity requirement for global LNG will increase to 800 mmty by 2030.

“During the course of the next few years, we see projects of 100-150 mmty being awarded, and we’ve got a bias toward the upper end of that and feel very good about the projects coming through,” Simonelli said.

“A number of customer discussions” are ongoing, as the industry deals with a tight global gas supply. “We feel good about LNG,” with some larger projects likely to be sanctioned, “as well as small midsize opportunities…”

The order outlook for TPS this year is likely to be “roughly consistent with 2020,” Simonelli added. “Importantly, the case for a multi-year growth opportunity beginning next year continues to improve.”

Most of the order growth in TPS is to be “driven by LNG over the next couple of years.” However, “we anticipate that we will start to book more meaningful equipment orders” next year for hydrogen and carbon capture utilization and storage projects.

Baker did not book any LNG awards during the third quarter, but it should book “one or two additional awards by the end of 2021,” the CEO said.

While the global economy is continuing to recover, “the pace of growth is being hampered by lingering effects from the Covid-19 Delta variant, global ship shortages, supply chain issues and energy supply constraints in multiple parts of the world,” Simonelli told investors.

Global growth overall, though, “appears to be on a relatively solid footing, underpinning a favorable outlook for the oil market, aided by continued spending discipline by the world’s largest producers.”

For the natural gas and the LNG markets, “fundamentals remain strong, with a combination of solid demand growth and extremely tight supply in many parts of the world.

“In fact, we believe the positive case, the structural demand growth in natural gas as part of the broader energy transition is becoming increasingly evident,” he said.

“The current environment illustrates the need for policymakers to focus on the utilization of natural gas as a baseload fuel that can be combined with renewable energy sources to provide a cleaner, safer, more affordable and more reliable source of energy to populations around the world.”

Many developed global economies “have had great success over the last 10 to 15 years lowering their carbon emissions by switching from coal to natural gas,” Simonelli said. “However, some policy scenarios have seen a more rapid conversion straight to renewables, which limits the role of natural gas as a transition fuel and can lead to broader grid instability.”

Simonelli said his executive team believes that “there is a strong and logical combination of a secure, stable baseload of natural gas that is needed to complement renewable energy sources and intermittencies.”

Recent events, said Simonelli, illustrate that “the costs of moving too aggressively” away from natural gas “are beginning to surface.” Across the globe, there has been “an unprecedented increase in energy prices, shutdowns and brownouts across multiple industries. The increase in natural gas prices has been most acute due to a number of factors, including underinvestment in gas reserves.”

Ironically, he said, “the fallout from higher prices has also led to an increase in coal consumption, leading to coal shortages and a spike in coal prices. Natural gas has been a key contributor to lowering emissions in the United States over the last 15 years as power generation consumption switched from coal to natural gas. U.S. power consumption of natural gas has increased from around 60% of total generation to roughly 40% over the past 20 years.”

Meanwhile, coal consumption had declined from 50%-plus of the energy supply mix to around 25%.

“By comparison today, roughly 60% of Asia-Pacific’s power generation comes from coal and about 10% from natural gas,” he said. “As more countries step up their carbon reduction commitments, we believe that natural gas will play a critical role in displacing higher emission sources like coal and by supporting the growth in renewable energy technologies with relatively cheaper and affordable base load power…

Natural gas and LNG are “core” to Baker’s strategy, he said, “and we will continue to play a key role in providing natural natural gas as a safe, reliable resource to the world.”

Baker’s Oilfield Services (OFS) unit is seeing activity levels on the rise, with North America “outpacing the international markets broadly,” Simonelli told investors. “We believe the OFS market is in the early stages of a broad-based multi-year recovery…Based on discussions with our customers, the pipeline of opportunities…continue to grow and will likely be a major driver of international growth in 2022.”

The “activity levels and pricing discussions are both moving in the right direction,” Simonelli said. However, the company “had to navigate multiple challenges during the third quarter. These included Hurricane Ida, Covid-related impacts, supply chain constraints and higher input costs in our production chemicals business.”

Worrell said overall, the OFS quarterly results “were below our expectations” because of several factors. Most notable was Ida, which disrupted Gulf of Mexico operations and the Gulf Coast for weeks.

In addition, “supply chain-related issues…impacted both revenues and margins. Our Chemicals business was the most heavily affected from these issues, with some pricing increases offset by escalating input, freight and logistics costs.”

There is expected to be some margin improvement during 4Q2021, said Worrell, “as some of the supply chain-related headwinds abate, and expected product sales lead to a more favorable mix. As a result, we believe that operating margin rates could approach double-digits for the fourth quarter.”

Baker has “limited visibility” about the outlook for North America in 2022 because of “the short-cycle nature of the market,” Worrell told investors. “We believe that the region could experience strong double-digit growth if commodity prices remain at current levels…Margin rates should also see strong improvement as some of the recent supply chain and cost escalation headwinds normalize.”

Orders for the quarter came in at $5.38 billion, up 5% year/year and 6% sequentially. The sequential increase was tied to higher order intake in TPS, OFS and Oilfield Equipment (OFE), partially offset by a reduction in DS.

Equipment orders were up 15% sequentially and service orders were down 1%. The increase in orders year/year resulted from higher orders in OFE, OFS and DS, partially offset by a decline in TPS. The total book-to-bill ratio in 3Q2021 was 1.1; the equipment book-to-bill was 1.1.