Baker Hughes Co. is helping to front a hydrogen infrastructure fund as a cornerstone investor with Chart Industries Inc. and Plug Power Inc. 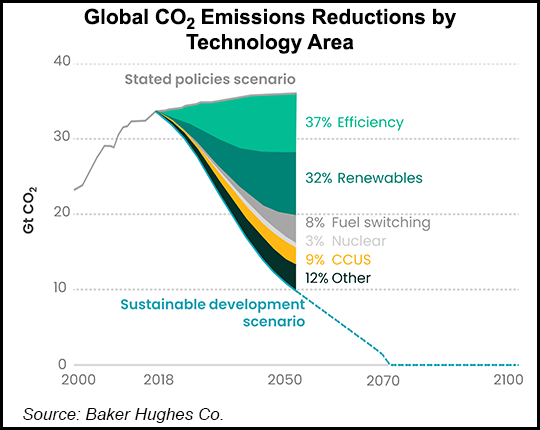 Fuel cell manufacturer Plug Power intends to commit $200 million to the FiveT Hydrogen Fund, with infrastructure giants Chart and Baker Hughes each committing $60 million to sponsoring the fund. The Euro-denominated fund aims to raise close to $1.4 billion from the financial and industrial investors.

“The FiveT Hydrogen Fund will combine the financial strength as well as the strategic and technical expertise of our companies to help advance hydrogen in new ways…This is another good example of our approach to new frontiers where we are making calculated, strategic bets to drive the energy transition forward.”

Baker Hughes has pivoted toward low-carbon technologies to complement other infrastructure services in the Turbomachinery & Process Solutions unit, including for liquefied natural gas (LNG), Simonelli said earlier this year.

The leading candidate today for Baker Hughes is via carbon capture utilization and storage (CCUS) options, with growing interest in hydrogen and energy storage options.

“We are seeing increased traction on CCUS, as well as hydrogen…with the continuing theme of the energy transition” the center of many customer discussions, said Simonelli. “We see several opportunities to deploy our existing technologies” to help customers reduce their carbon footprints as part of the transition to lower emissions.

Baker Hughes last fall purchased Compact Carbon Capture, aka 3C, an early stage carbon capture technology company. The equipment has a 75% smaller footprint and has a lower cost than what is available today, Simonelli said.

Likewise, Chart’s gas liquefaction technology can be modified to liquefy hydrogen for export, according to CEO Jill Evanco.

With more than 50 years manufacturing hydrogen equipment, Evanko said participating as an early investor in the FiveT fund offers “an important step in the acceleration of the buildout of the global hydrogen infrastructure.”

The FiveT projects to be financed would be for hydrogen production, storage and distribution. The fund is planning alliances with other industrial companies looking to build the hydrogen energy supply chain that would allow projects to be built at scale.

“Plug Power established the first commercial market for fuel cells and is now building the first green hydrogen generation network across the United States,” said CEO Andy Marsh. “We are now one of the original investors in the first significant fund to support funding hydrogen infrastructure projects…We believe this fund will help accelerate the construction of hydrogen infrastructure globally which will support rapid deployment of fuel cell applications.”

“This confirms that this is absolutely the right time to unlock the hydrogen economy potential for society, investors, policy makers and corporates, alike,” Franc said of the fund sponsors. “We all know that this moment in the hydrogen journey requires a very innovative approach to infrastructure investment.”

The fund is expected to close before the end of September. First cash from investors would be due in early 2022 and drawn as required for investment over several years.

In a sign that the energy industry’s recovery from Covid-19 remains choppy, monthly trading for natural gas pipeline capacity releases reversed course, soaring 178% in June, according to the latest figures from The Capacity Center. The jump was a massive improvement from May, when monthly transactions plunged 70% from April levels, the data services company’s…