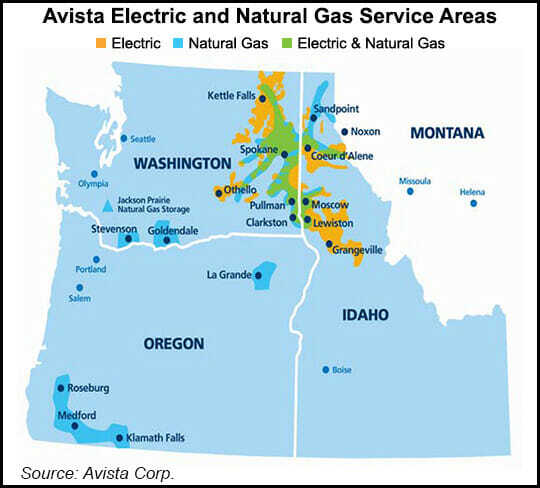 CEO Dennis Vermillion said Avista sees increasing opportunities to even further bring down greenhouse gas (GHG) emissions. Natural gas already plays a role and can continue to play a key part in that regard, he said.

“Our strategies include reducing consumption via conservation and energy efficiency and improving infrastructure,” Vermillion said. “As with reductions in emissions associated with electricity, we will need innovation and affordable technologies to achieve these goals.”

A key part of the Spokane, WA-based utility’s strategy centers on renewable natural gas (RNG) and other new technologies, such as hydrogen and renewable biofuels.

Operating in parts of Alaska, Idaho, Oregon and Washington, Avista Utilities have reduced their relative emissions through energy efficiency measures and other proactive efforts.

In its updated integrated energy resource plans, Avista has stressed an increased role in natural gas peaking plants and other reliance on gas resources.

Separately, Avista is pursuing an evaluation of how to best integrate RNG into its gas supply portfolio and researching hydrogen as another renewable fuel.

Similar decarbonization efforts have been unveiled by major gas utilities across the nation. In the West, they include Sempra Energy’s Southern California Gas Co., NW Natural, Southwest Gas  Corp. and Dominion Resources’ Questar Gas in Utah.