After somewhat of a breather earlier in August, natural gas forward prices resumed their slide during the Aug. 16-21 period as weather outlooks showed the intense heat that has suffocated much of the United States this week finally easing. With cooler air set to move in and linger through early September, forward prices were down a nickel or more through the winter strip, with smaller shifts of a few pennies further out the curve, according to NGI’s Forward Look. 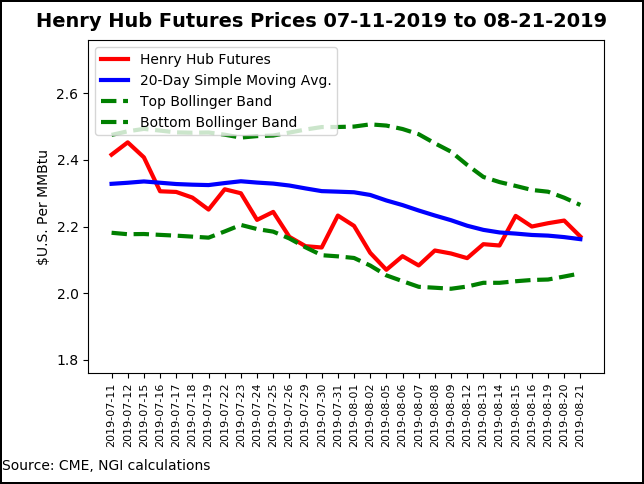 Wednesday’s European weather model had hinted that heat could return at the end of the forecast period, but that turned out not to be the case, as Thursday’s forecast shifted cooler again, both for the balance of August as well as the first few days of September, according to Bespoke Weather Services. The change was most drastic in the American ensemble data, which dropped a whopping 15 forecast gas-weighted degree days (GWDD) in the last 24 hours.

The European data, while cooler, only dropped a couple of GWDDs in its forecast, and is Bespoke’s preferred model, with the American model likely having gone too far in the cooler direction.

“We still view this as a cooler window in the overall hotter background state as opposed to a lasting change in pattern, with the idea being that above-normal heat can return to the eastern half of the nation after the early part of September,” Bespoke chief meteorologist Brian Lovern said. “Tropical activity will be watched as well, given that we are heading into peak season climatologically.”

Friday’s weather data maintained the overall pattern, adding only a handful of GWDDs to the outlook.

Even as long-range weather outlooks had been showing cooler weather for the latter part of August, the sweltering conditions that resulted in record temperatures on the East Coast and a new all-time high for power demand in Texas were too much to ignore. Futures prices during the Aug. 16-21 period chugged along on most days, but bulls held onto the coveted $2.15 level, even after Wednesday’s notable 5-cent shift lower, which left the September contact at $2.17.

Most of the cooler forecast progression has been centered in the middle to eastern portions of the country, and with the changes being focused on the Labor Day weekend, it could mean a sharp decline in daily demand is on the near-term horizon, according to Mobius Risk Group. However, unless these changes generate triple-digit injections, it may not be enough to drive the market back down toward a retest of the $2.00 barrier, the Houston-based firm said.

“It is tempting to consider the implications of a cooler-than-normal September on the front of the Nymex natural gas curve, and the obvious initial result would be larger-than-anticipated injections early in the month. This would of course be a bearish factor,” Mobius natural gas analyst Zane Curry said. “On the other hand, this could begin to cause market participants to consider the possibility of an early start to winter.”

“The market’s typical short-term memory could cause a cooler-than-normal September to have an abnormally large impact on near-term prices,” Curry said.

To be sure, there are several other factors influencing the market. Production has rebounded to earlier highs, and liquefied natural gas (LNG) exports have returned to pre-maintenance levels. Exports to Mexico could also start to ramp back up once a deal is reached between gas pipelines and Mexican utility Comisión Federal de Electricidad.

Meanwhile, power burns, though weaker on Thursday because of falling demand, were revised stronger each day last week, which may happen again with the most recent data, Bespoke said.

Power burn is likely to set a second consecutive monthly record in August, averaging 41.5 Bcf/d ( up 0.9 Bcf/d versus July’s record level), according to Jefferies LLC. Cooling degree days have been about 6% above average in August but are down roughly 2% year/year versus power burn that is up 2.7 Bcf/d year/year.

“Structural shifts in the generation mix, low gas prices and warm weather continue to push burns higher, now likely to average above 40 Bcf/d in August for the second consecutive month. To put the level of burn into perspective, there were only two days that power burn reached 40 Bcf/d in 2017,” Jefferies analysts said.

Nevertheless, there is a strong case for additional downside risk this fall, especially as Kinder Morgan Inc.’s Gulf Coast Express is set to begin full operations next month and Texas Eastern Transmission is nearing the end of repairs following an explosion on Aug. 1, adding to oversupply concerns this fall.

The extent of bearish sentiment will be critical over the next 30-45 days, according to EBW Analytics Group. While bearish catalysts are not lacking, record short positioning continues to pose the risk of a sharp short-covering rally that pushes Nymex futures higher.

“The most likely scenario for Nymex futures, however, continues to point to prices testing support at $2.00/MMBtu ahead,” EBW said.

Forward prices across most of the country slid in line with Nymex futures, although the intense heat that has continued to grip Texas resulted in small gains for a couple of markets.

Waha September prices picked up 2 cents from Aug. 16-21 to reach $1.24, while the balance of summer (September-October) rose a penny to $1.35, according to Forward Look.

The winter strip at Waha fell a penny to $1.68, but next summer (April-October) jumped a nickel to $1.02, Forward Look data show.

While the near-term strength can be attributed to the triple-digit temperatures blazing across Texas and other downstream markets in the Southwest and California, the gains further out the curve could be tied to a more structural shift in the supply/demand balance.

In the past week, Gulf Coast Express began initial gas flows ahead of full in-service, while Cameron LNG exported its first cargo. Freeport LNG was already producing, and its first shipment was expected to set sail by the end of the month.

Feed gas deliveries to LNG export terminals have crested the 6 Bcf/d mark, and analysts see another 1 Bcf/d by the end of the year, some of which is being supplied with gas from the Permian. By next summer, barring any additional delays at Cameron or Freeport, about 10 Bcf/d of nameplate LNG feed gas capacity is expected.

Also a year from now, Kinder Morgan will be nearing the scheduled in-service of its second greenfield Permian gas line, the 2 Bcf/d Permian Highway, which is due online in October. Crews have already started preliminary construction activities such as centerline staking and grading in the Waha area, according to the company.

In the Rockies, the return of flow capacity on Westcoast Transmission provided additional headwinds to forward prices at Northwest Sumas as supply concerns for this winter have eased.

Flow capacity on Westcoast Transmission was ramping up by close to 250 MMcf/d after a monthlong maintenance event that severely limited southbound flows, according to Genscape. Westcoast’s Station 4B in British Columbia had been limited to around 900 MMcf/d of flow capacity since July 14, but for Wednesday’s gas day, was back up to around 1,150 MMcf/d.

“Flows have been coming in essentially at capacity, and early cycles for Wednesday’s gas day were no exception, showing scheduled flows increasing commensurate with the operating cap,” Genscape analyst Joseph Bernardi said. “This change is slightly earlier than expected but still roughly consistent with Westcoast’s long-term maintenance schedule, which back in February had forecasted this capacity increase for roughly Sept. 1.”

More capacity increases are expected for the rest of this month, increasing up to around 1,300 MMcf/d, according to Genscape. These reductions have been in place due to safety testing undertaken by Westcoast following the explosion that occurred last October.

“The fact that this increase in operating capacity has started to occur as expected (or even slightly earlier than expected) has been functioning as a signal that the Pacific Northwest’s gas supply this fall and winter will be less constrained,” Bernardi said.

The easing fears of inadequate supply were seen through the curve, but most significantly in the winter strip. Northwest Sumas September prices fell 11 cents from Aug. 16-21 to reach $1.738, while the balance of summer was down 13 cents to $1.75. The winter, meanwhile, plunged 23 cents to $1.56.

Downstream, inventory at Northwest Pipeline’s Jackson Prairie storage facility is still above five-year highs, but only barely, according to Genscape. Its inventory has come in consistently above the five-year maximum every day since mid-March, exceeding the previous maximum by as much as 7.4 Bcf (146% of maximum). Current inventories sat around 1.5 Bcf above the five-year, at 21.3 Bcf versus 19.8 Bcf, Bernardi said.

Meanwhile, the Alberta government on Tuesday announced a one-year extension of mandatory oil production cuts to prop up prices through 2020 and counter prolonged pipeline project delays.

Over the past year, the province has produced an average of about 10.2 Bcf/d, according to Genscape. The firm’s production forecast predicts production will decline slightly through the next 18 months, but once again resume growing in 2022 and beyond.

“While the province puts out over 10 Bcf/d, provincial demand generally averages around 5.6 Bcf/d. The delta gets injected into storage and exported to neighboring provinces and the United States,” Genscape senior natural gas analyst Rick Margolin said.

Over the years, however, clearing the surplus has become increasingly difficult due to competition with U.S. production for eastern Canadian and U.S. demand. This summer, the challenges have been even greater due to intra-provincial pipeline maintenance restricting the flow of production to intra-provincial storage fields and provincial border export points.

Many producers drove the request for mandatory cuts by asking the province to oversee compliance and help broker an arrangement with the province’s main pipeline operator, TC Energy Corp.

For now, Western Canadian forward prices don’t reflect any potential cuts to production. NOVA/AECO C forward prices behaved much like those across the United, with the September contract slipping 6 cents from Aug. 16-21 to reach $1.02, the balance of summer falling 8 cents to $1.13 and the winter strip dropping 6 cents to $1.51, according to Forward Look.