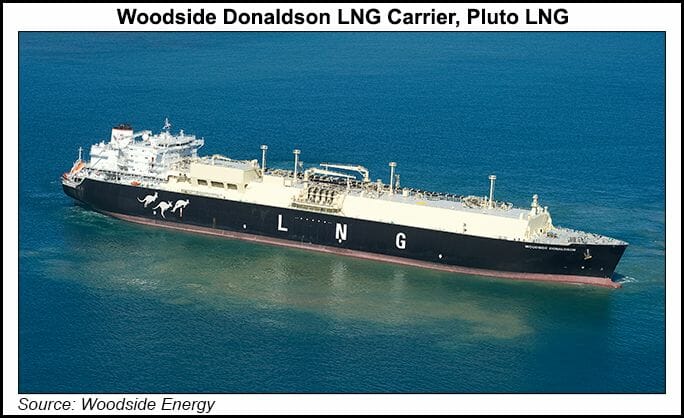 Most of Woodside’s LNG contracts are with Asian customers and are indexed to oil prices with roughly a three-month time lag. Management said last week it expects revenues to improve this quarter because oil prices increased in the third quarter and spot LNG prices are higher.

“As expected, sales revenue in the third quarter was impacted by lower realized LNG prices, reflecting the oil price lag in many of our contracts,” said CEO Peter Coleman. “Pricing in the fourth quarter and in Q1 2021 is expected to be stronger given the improvement in oil price in recent months. In particular, I am encouraged by the strengthening Asian LNG spot price, which is now above $6.50/MMBtu for December deliveries.”

Management said it plans to make a positive final investment decision (FID) in the second half of next year to build a second liquefaction train at Pluto, which would increase capacity to 9.9 million metric tons/year (mmty) from 4.9 mmty. In March management announced it had delayed the FID.

Woodside reached an agreement in the third quarter on key principles with Mitsui E&P Australia Pty. Ltd. and Beach Energy Ltd. on the Waitsia gas project stage 2 in the Pluto fields, management said.

Woodside sold 26% of its LNG in the third quarter on a spot basis and expects to sell 30% of its volumes on a spot basis in the full year, management said. Spot cargoes currently are selling on a dollar-per-MMBtu basis that is roughly 15% of the dollar-per-barrel Brent oil price, management said, meaning that spot LNG is currently selling at slightly less than oil parity prices, as a barrel of oil is roughly equivalent to 5.8 MMBtu in energy content.

Sales volumes in the third quarter totaled 26.7 million barrels of oil equivalent (MMboe), compared with 24.2 MMboe in the year-ago period and 27.1 MMboe in the second quarter.