Shale gas development in Australia will be an expensive proposition, with infrastructure costs double those in the United States, according to a 252-page report by the Australian Council of Learned Academies (ACOLA). 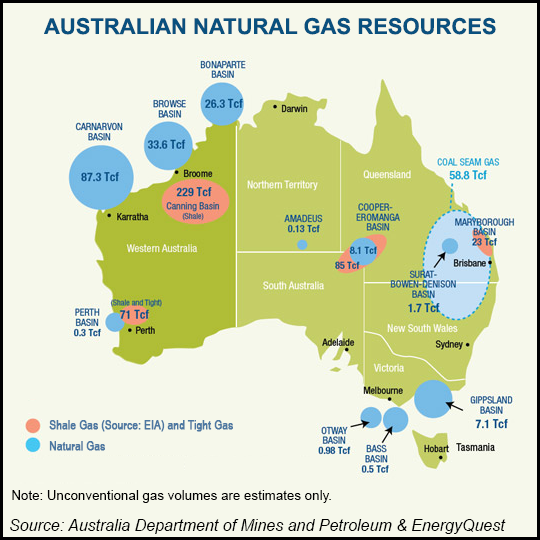 “Shale gas will not be cheap gas in most circumstances,” the report said. “It will require a relatively high price to make it profitable to produce. The current low price of shale gas in North America is not sustainable but production there is being maintained, despite the low price, either for contractual reasons and/or because some of the gas is produced as a by-product of higher value oil derived from the shales.”

ACOLA said a wellhead price ranging from $6.00/gigajoule (GJ) ($5.69/MMBtu) to $9.00/GJ ($8.52/MMBtu) would be required to produce and transport Australian gas to be profitable. Researchers said the current netback price for Australian gas exports to Japan is about $10/GJ ($9.47/MMBtu).

“The suggestion has been made that a proportion of future shale gas should be reserved for domestic use, as a mechanism to hold down domestic gas prices,” ACOLA said, adding that an alternative suggestion would be for the federal government in Canberra to “work with industry to create vital infrastructure, particularly in remote parts of Australia, to encourage the development of a more cost effective and more widespread shale gas industry.”

According to the group, Australia’s growing shale gas industry, which researchers said was “very small” by North American standards, will spend more than $500 million on exploration in the country over the next one to two years. ACOLA said estimates over how much natural gas was locked in Australia’s shale plays varied widely and “have a high degree of uncertainty attached to them.” The most commonly cited figure was 396 Tcf, but researchers said that figure was based on only four basins. If all prospective basins were considered, the figure could be more than 1,000 Tcf.

Researchers also said it was unlikely that there would be many impacts from hydraulic fracturing (fracking) in Australia. “Nonetheless, it is important that the shale gas industry takes full account of possible adverse impacts on the landscape, soils, flora and fauna, groundwater and surface water, the atmosphere and on human health in order to address people’s concerns. This will require improved baseline studies against which to measure future change and to compare natural change and change resulting from industry activities.”