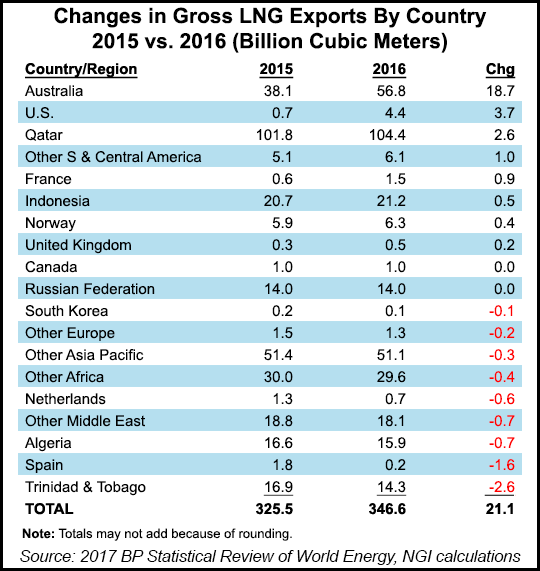 A plethora of liquefied natural gas (LNG) projects is in the works or underway, as Australia vies to become the world’s leading gas exporter, potentially overtaking Qatar. Australia overtook Qatar in 2013 as Japan’s top LNG supplier, and in 2015 it became the second-leading LNG exporter. The country is poised to overtake Qatar in 2020.

However, overseas LNG customers shouldn’t be allowed to pay less for Australian gas than Australians are charged, Turnbull said.

“Our first duty is to protect our people, our businesses, our households,” he said in announcing the restrictions. The nation “is about to become the largest exporter of LNG in the world,” but a gas shortage exists in the country’s east coast domestic market. “We clearly have to address that.”

New regulations would give Australian customers priority access to gas supply before it is exported. Restricted gas exports would take effect next year.

“The finalization of our tough gas regulations will increase supply to the domestic market, putting downward pressure on gas prices which have risen because of supply shortfalls,” Turnbull said.

“We simply cannot allow Australians to pay more for Australian gas than competitors overseas do. Restrictions will be placed on gas exporters when there are shortages in the domestic market…Every decision we make in the energy sector is designed to ease pressure on household bills and make businesses more competitive.”

The government also agreed to strengthen the Australian Energy Regulator by providing it with an additional $67.4 million “to stop energy network companies gaming the system and overturning rulings in the courts,” the prime minister said.

In addition, the government plans to ensure more continuous dispatchable power is provided, including support to promote new investments.

Analysts with Tudor, Pickering, Holt & Co. Inc. (TPH) called the gas export restrictions “potentially negative for some of the existing LNG suppliers, especially in eastern Australia, but it may be supportive for the global LNG market.”

However, “discussions with key producers earlier this year turned sour when the government concluded that producers had failed to convince them that they could supply enough at home to reduce prices by 2019.”

Chevron Corp. already has ramped up its massive Gorgon LNG project in Australia, with Wheatstone, at 13.4 million metric tons/year (mmty), set to come online this year.

Ichthys LNG Project, backed by Japan’s Inpex Corp. with 8.4 mmty, and Shell-backed Prelude, a floating LNG project with 3.6 mmty, are expected to ramp up in 2018. As well, said TPH, some operators are considering installing floating storage regasification units to import LNG into southeastern Australia, “given dislocations in supply and demand.”