Australian Prime Minister (PM) Scott Morrison wants to create a transparent domestic natural gas hub along the east coast similar to Henry Hub in order to lower gas prices in the region and spur an economic recovery from the Covid-19 pandemic. 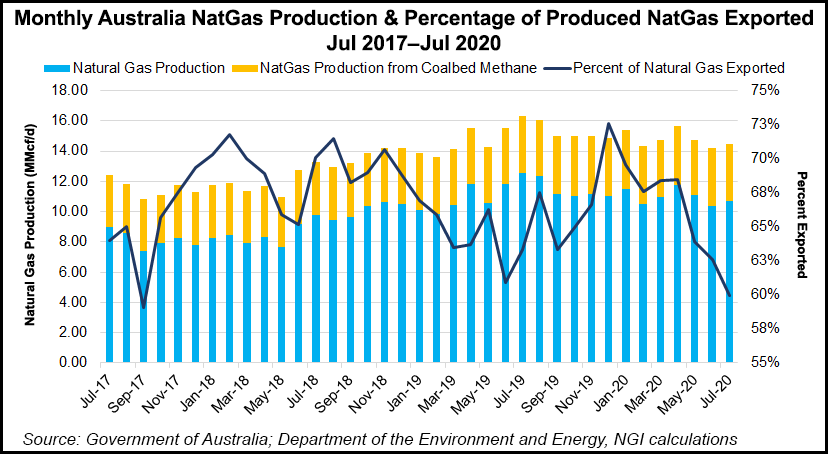 The idea was among a number of measures that Morrison proposed earlier this month to reform the Australian east coast market. Another proposal was reaching new agreements with LNG export projects in the northeastern part of the country to provide cheaper domestic supply, as current preliminary agreements are set to expire this year. Morrison said his administration would work with the Australian Competition and Consumer Commission (ACCC) to review the LNG netback price under which export projects sell domestic gas.

Also under consideration is a gas reservation regime to ensure supply “at a reasonable price,” investing A$28.3 million ($19.9 million) to spur onshore production from five basins and enforcing “use-it-or-lose-it” clauses against holders of gas licenses that do not adequately develop projects. The government plans to spend A$10.9 million ($7.68 million) to develop a “National Gas Infrastructure Plan” that would identify pipelines and critical infrastructure and “highlight where the government will step in if the private sector doesn’t invest,” Morrison said.

Pipeline regulations would be reformed to promote competition, he added.

Morrison did not provide further details or timelines, but did say that a “voluntary industry-led code of conduct” would be delivered by February 2021.

The country in 2019 was the world’s second largest LNG exporter with total deliveries of 74.5 million metric tons, but the populous east coast has considered importing LNG because of relatively high prices for domestic pipeline gas.

“We’ll work with industry to deliver a gas hub for Australia that will ensure households and businesses enjoy the benefits of our abundant local gas while we hold our position as one of the top global liquefied natural gas exporters,” Morrison said.

The Australian Petroleum Production & Exploration Association (APPEA), the country’s largest upstream trade group, called the proposals “a good first step to reinvigorate Australia’s oil and gas industry,” which has been hit hard by the Covid-19 crisis.

It said it would work with the government to extend agreements for domestic supply with the east coast LNG exporters, adding that the government “recognizes there is no silver bullet to driving down gas prices and that several steps need to be taken.”

The organization called for the government to extend economic incentives for smaller exploration and production companies, and to help underpin investment in pipeline infrastructure, which can be unattractive because of the vast distances through sparsely populated areas.

Western Australia, which houses most of the country’s LNG export capacity, “has ample gas supply and low prices,” said CEO Graeme Bethune of Australian consultancy EnergyQuest in a note.

However, domestic prices offered in the northeastern state of Queensland are about A$2/GJ ($1.49.MMBtu) higher than the LNG netback price. They were roughly equivalent in early 2019, the watchdog said. In addition, since September 2019, northeastern LNG producers have sold 18 LNG spot cargoes well below the prices offered to the domestic market.

The prices cited by the ACCC “could be evidence that competition in the contract market is lacking,” Australia gas market expert Kelly Neill told NGI. However, those prices were offers and not necessarily transaction prices, said Neill, a doctoral student at Rice University’s Center for Energy Studies at the Baker Institute for Public Policy. In addition, the offers were under long-term contracts, not spot prices on east coast daily markets, she said.

The 18 spot cargoes do not necessarily indicate the domestic market is overpriced, Neill added, as domestic transport could have been more difficult to access or the timing of domestic deals could have been less favorable.

Before the release of the most recent ACCC report, Neill’s research showed that spot prices in Eastern Australia’s domestic natural gas auctions generally were close to marginal supply prices.

The two most potentially beneficial proposals by Morrison are to create the so-called Australian gas hub at the existing Wallumbilla gas hub in Queensland and to reform pipeline regulations, Neill said.

Wallumbilla is one of two voluntary gas hubs in Eastern Australia, Neill said. Liquidity has been growing at Wallumbilla but is still low, she added. A futures contract associated with the hub has been listed on the Australian Securities Exchange since 2014 but has never been traded.

“Something as liquid and transparent as Henry Hub is certainly something to aim for, and a redesign may help,” she said, adding it would be a long-term project.

The other four hubs in Eastern Australia are mandatory hubs in the major cities. Neill said consolidating those into two hubs could improve transparency.

Pipelines should be a cheaper way to bring gas from the LNG-producing regions in the northeastern part of Australia to the southeastern region, compared to building LNG import facilities, Neill said. The fact that gas import projects have been proposed “indicates that something has gone wrong and governments should be able to play a useful role here.”

U.S. regulations that limit profits for pipelines could be a positive model for Australia, where pipelines are often not regulated, Neill said.

Morrison wants to increase gas supply in the northern part of Australia, but that region already has abundant gas, Neill said. The PM failed to address moratoria that prevent the development of onshore reserves in the southeastern states of Victoria and New South Wales (NSW) that are close to demand centers, she noted. Victoria recently allowed conventional onshore exploration to restart mid-2021, while NSW is advancing a gas project as other projects seek authorization.

Bethune said without the “magic wand” of changing policies in Victoria and NSW, the least expensive new source of gas would likely be in Queensland, where the state government is releasing exploration acreage and any gas found would be reserved for the domestic market.

Lower global gas prices have boosted the potential for construction of LNG import terminals, he said.

“Rather than spending $5.8 billion on a pipeline from Western Australia,” Bethune said, “it would be cheaper for Victoria to import West Australian LNG through a $700 million LNG import terminal.”