Australia Pacific LNG has completed production of its first cargo of liquefied natural gas (LNG) from its facility on Curtis Island near Gladstone, Queensland, along Australia’s eastern coast. 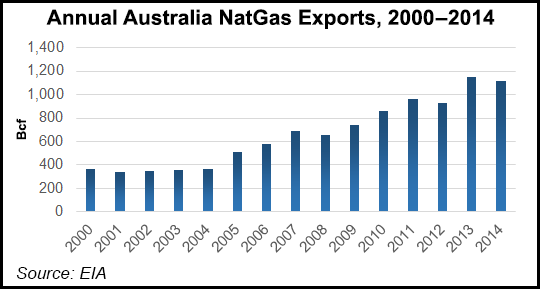 Starting operations at the second train represents “the final major construction milestone” for the project, the company said. The second train had produced 150,000 cubic meters of LNG as of Monday, or enough to fill one LNG ship, according to CEO Page Maxson.

“The second train is up and running, enabling our LNG facility on Curtis Island to deliver commercial quantities of LNG at sustained output from both trains,” Maxson said Monday. “With our strong reserves position we are looking forward to working with our key customers here in Australia and overseas to help meet their energy needs today and in the decades ahead.”

Australia Pacific also recently completed an initial 120-day operational test period on the first train at its facility, which began exporting in January. Construction began in 2011 for the facility, which consists of two production units, each with the capacity to deliver 4.5 million tonnes per annum (mtpa) of LNG (see Daily GPI, Jan. 12). The company said Monday it has loaded 47 cargoes to date.

Australia Pacific is a joint venture of ConocoPhillips (37.5%), Origin Energy Ltd. (37.5%) and Sinopec (25%). The facility has signed 20-year LNG contracts with Sinopec for 7.6 mtpa and Kansai Electric for 1 mtpa.